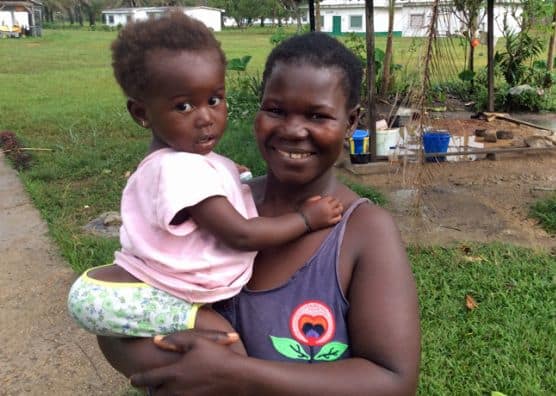 A young girl in the Congo with a rare malformation receives surgery, and God’s miracles abound.

Elliott Tennpenny moved to Impfondo, Republic of the Congo, with his wife and two sons to serve as an emergency medicine physician at Pioneer Christian Hospital.

“If you don’t do something, she’s just going home to die,” her mother said.

She was right. Grace had been born with a large spinal malformation where an abnormal opening of the spinal cord allows the nerves and fluid to come out at the base of her spine. When we met her 14 months later, the skin covering the swelling was paper thin and ready to burst open. 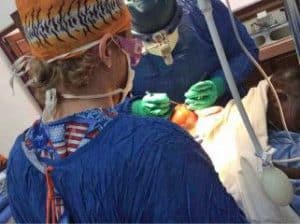 With much prayer, physicians performed surgery on the malformation at the base of Grace’s spine.

If it burst in the remote, forest area where she lives, she would quickly die. After several weeks of praying, asking advice from multiple experts, reading everything possible, and exhausting the possibilities to transfer her, we made the difficult decision to operate.

We entered surgery with all our personnel. Everyone had grown to love Grace, and we weren’t sure if this would be the last time we’d see her beautiful smile. The room was solemn as Dr. Joe prepared anesthesia, I read notes and prayed silently in the corner, Ben and Eamon collected supplies, and Danny and Sarah prepared her special bed for post-operative care. After everything was prepared, we prayed together. Pictured left, a team of surgeons worked on Grace to repair her spinal cord. Without the repair, she likely would have died.

“When peace like a river attendeth my soul, when storms like sea billows roll” played in the background. The first incision was made. We drained the fluid and opened the sac, revealing the interworking of God’s hand. Tiny, white, spinal nerves crawled throughout the sac, created to control every fine movement and feeling of Grace’s legs. 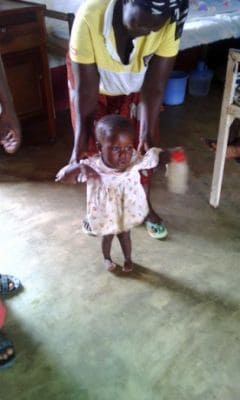 It was unknown if Grace would survive the surgery, and if she did, whether or not she would have any use of her legs. Praise God, both her life and legs were spared. Here she is post-surgery learning to walk.

Working carefully around this precious circuit, we tediously separated the thin layers of skin and closed the opening. After finishing a long and difficult operation, we praised God for guarding Grace’s life through surgery but worried she would never be able to move her legs again. She quickly proved us wrong as she woke up kicking.

Every day we see Grace, we are reminded of God’s goodness. Most recently, Grace has started standing for the first time and trying to learn to walk. Through her, we have been touched by His grace and healing made real through the life of this precious little girl.

It’s not by my knowledge and capabilities that Grace has been made well. Never before has this truth been made quite so real.

“And we have such trust through Christ toward God. Not that we are sufficient of ourselves to think of anything as being from ourselves, but our sufficiency is from God, who also made us sufficient as ministers of the new covenant, not of the letter but of the Spirit; for the letter kills, but the Spirit gives life” (2 Corinthians 3: 4-6, NKJV).

We may not feel or be qualified to do the things God asks us to do, but if He asks us to do it, He promises to give us the capabilities and use us for His glory. What is God asking you to do today?