Reaching a hurting world in the name of Jesus 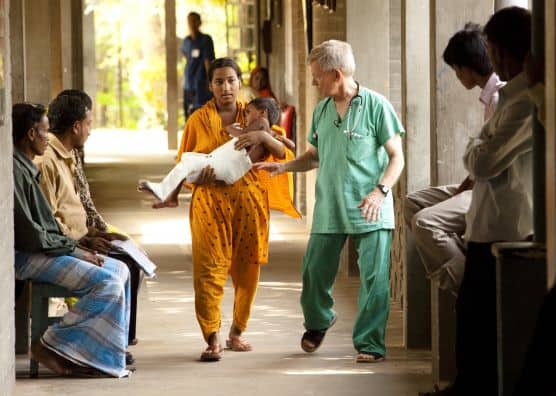 September, 2015—Hope is often one of the first—and most profound—losses in times of tragedy.

When lives are shattered by disaster or war, poverty, famine and disease, Samaritan’s Purse’s Disaster Assistance Response Team (DART) is there to meet the immediate critical needs of victims. And it is able to share the love and hope found in Jesus Christ.

Times of crisis require immediate response and resources. DART units stand ready to respond at a moment’s notice whenever and wherever disaster strikes, and strive to be the first on the ground in times of crisis.

“My experiences during these missions have taken me to the heights of joy and the depths of despair that manifests in the wake of human loss, suffering, resilience, survival and triumph,” says Dr. Azaria Marthyman, who has been a DART team member since 2010.

“Samaritan’s Purse is a well-organized and capable organization that wants to maintain its capacity to respond and mobilize quickly to the needs of the people when a disaster hits.”

Dr. Marthyman first served with Samaritan’s Purse in Haiti during the cholera outbreak in that country. He has since deployed to the Philippines following Typhoon Haiyan in 2013, and was on the front lines in two deployments to Liberia during the Ebola epidemic in 2014. Samaritan’s Purse is expanding its ability to serve around the world with a state-of-the-art Emergency Field Hospital that will take our capacity to serve in times of crisis to a new level.

At full capacity, the field hospital covers more than an acre, which is about the size of a football field. The hospital can house two operating rooms and 60 beds—40 for post-operative patients and 20 for general medical patients.

“We can never predict when a big disaster is going to happen, but at Samaritan’s Purse we want to be ready and become a lot more intentional about that,” says Ken Issacs, Samaritan’s Purse International’s vice president of programs and government relations.

Medical equipment and state-of-the art facilities are only as effective as the volunteers who are ready, willing and able to operate them. And being a member of DART with Samaritan’s Purse is a greater calling than simply that of a secular medical mission.

“I encourage every person whose heart is resounding with the call to action to please enroll and participate in the DART training that is being provided by Samaritan’s Purse,” Isaacs says.

“When you are a DART member, you will be a tangible expression of the love and compassion of Jesus Christ.”

“Do not withhold good from those who need it, when you have the ability to help.” (Proverbs 3:27, ESV)

Would you or someone you know be interested in becoming a DART team member? Learn more by visiting our international employment opportunities page.