Two pastors join Samaritan’s Purse volunteers in helping their wildfire-ravaged British Columbia community, and come away with a new understanding of how donations to Samaritan’s Purse from people like you are making a difference now and for all eternity.

When the Samaritan’s Purse Disaster Relief Unit tractor trailer arrived in Williams Lake, BC, in August to help people who lost their homes and possession to a catastrophic wildfire, Calvary Church generously offered to host the unit  and our volunteers.

But that wasn’t enough for Calvary Church lead pastor Jay McAlister and assistant pastor Evan Fletcher. They decided they needed to be the hands and feet of Jesus and joined Samaritan’s Purse volunteers for a day in bringing physical and spiritual help to hurting residents.

“I wanted to be part of it, to understand the process, and see the impact it’s having on people in our community,” said Jay.

We trained Jay how to sift through ash and rubble of destroyed homes to find any possessions that might have survived the fire. Often, these items are precious keepsakes that bring some comfort to grateful residents.

Then, donations from people like you enabled us to provide Jay and all the other volunteers with a mask and goggles, a protective suit and other special equipment so they could do their volunteer work safely.

“The work wasn’t really hard, but it was just hot,” Jay said. “It’s tedious to be digging around and trying to breathe through a mask.”

Meanwhile, Evan joined a Samaritan’s Purse team that spent the day removing fridges and freezers full of dangerous, rotten food from more than a dozen homes that, because of the wildfire, had been without electricity for as much as two weeks. The team moved the fridges and freezers to the curb for pickup by the municipality. 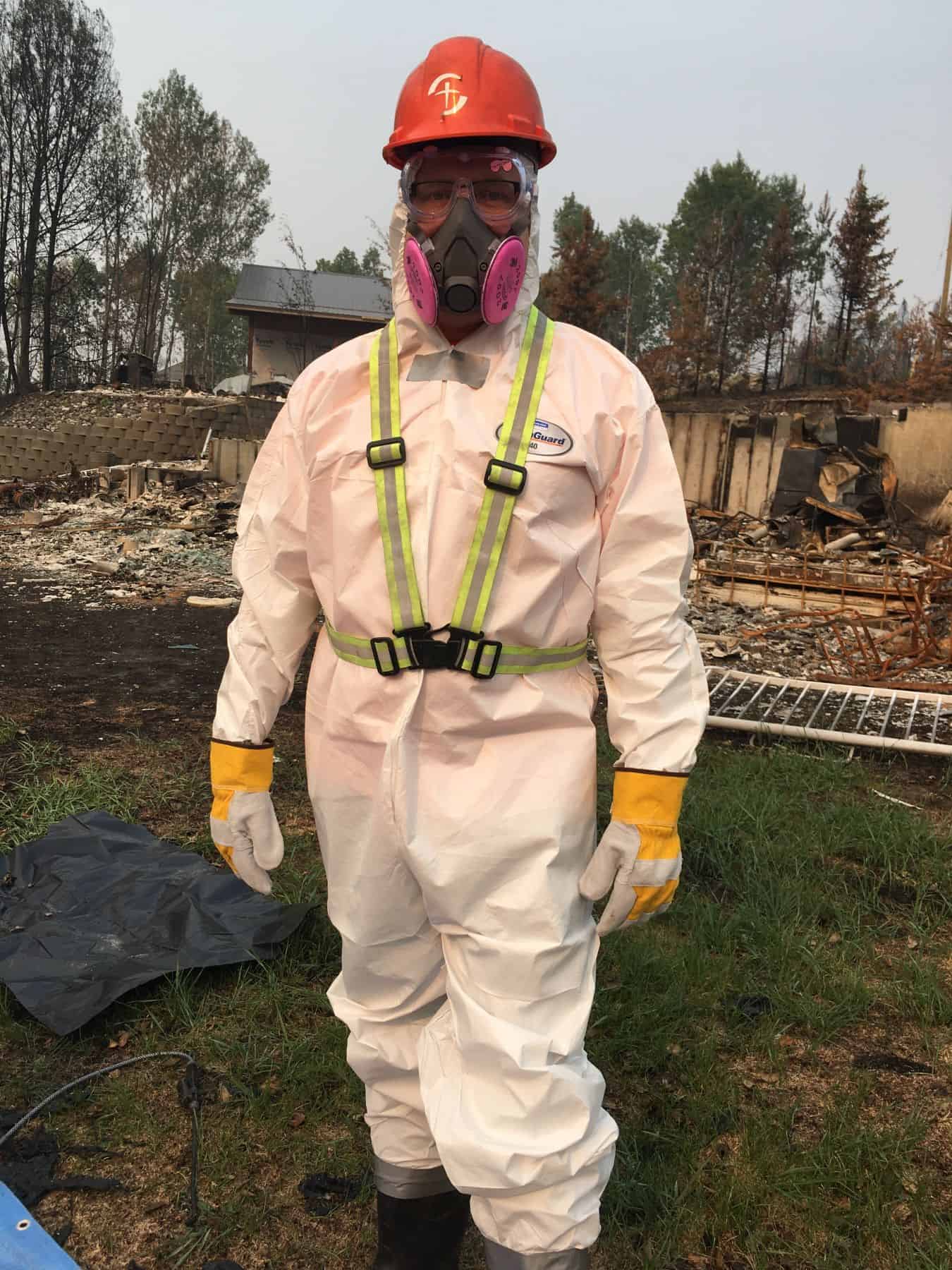 Jay McAlister, lead pastor of Calvary Church in Williams Lake, BC, wore Samaritan’s Purse protective equipment as he joined volunteers helping residents who lost their homes and possessions to a wildfire.

Both pastors viewed their volunteerism as an opportunity to interact with the community in a new and meaningful way.

“It was a perfect time to connect with people who we normally can’t connect with,” Evan said. “Often, we’re not welcome in people’s space, so this seemed like an open door.”

As many of the volunteers were Christ followers, Jay and Evan also saw the work as meaningful evidence that churches make life better for residents. And both thanked Samaritan’s Purse and its supporters for making this possible.

“I had no idea Samaritan’s Purse is so diverse in how it helps people,” said Evan. “You come in and lead the local churches in ministering to people.”

During our two weeks in Williams Lake in August, we partnered with churches and volunteers to help more than 60 homeowners in need, all at no cost to them. In many cases, the Lord opened doors for us to explain our motivation: “we are [God’s] workmanship, created in Christ Jesus for good works, which God prepared beforehand, that we should walk in them” (Ephesians 2:10. ESV).

We rejoice that through this ministry, and in partnership with crisis-trained Billy Graham Rapid Response Team chaplains, God brought eight Williams Lake residents to faith in His Son.

You can help Canadians in crisis through your support of Samaritan’s Purse. Please join us so that together, we can show people “the love of Christ that surpasses knowledge” (Ephesians 3:19).