Nurse ministers at a medical clinic in Cambodia 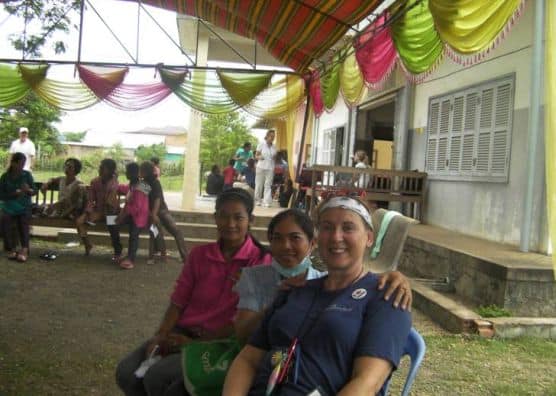 Helen Adams, a Registered Nurse who recently volunteered on a Samaritan’s Purse medical team to Cambodia, had the opportunity to minister to a woman suffering from embedded shrapnel.

Jeoung Ra slowly and shyly approached the eyeglass clinic area. As she came closer to me, it became obvious to me that her right eye was false.

With the traditional greeting of a nod accompanied by hands together as if in prayer, I welcomed her and asked her to have a seat between me and the translator.

It was our second-last day running a medical clinic in rural northern Cambodia, and the heat was stifling—but our Samaritan’s Purse medical team was as enthusiastic as ever to serve God’s love and grace to our patients. 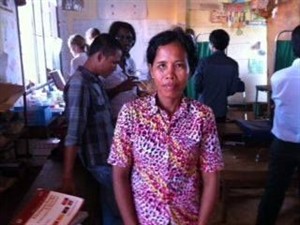 The woman with the prosthetic eye was 53 years old. I tested the vision of her left eye with a chart that was on a tent post about 3.5 meters away. Having seen many cataracts in the past several days, I was happy to report that her vision in that eye was very good. If cataracts had been the case, I wouldn’t have been able to improve her vision with anything from my inventory of donated glasses from Canada.

I asked her what happened to her right eye. Through the translator, she explained she had lost her eye in 1979 because of an exploding landmine. By pinching parts of her own face and hands, she indicated there were still pieces of shrapnel embedded in her skin. I asked if she wanted to see the doctor and she agreed, so I took her to the triage area and explained her issue.

When I saw her later, she was waiting for surgery. She looked calm and curious, but all alone. I approached with a translator, and asked if I might pray for her.   My prayer, in English, went up to God, the Great Healer of body and soul. Later I learned her surgery had been successful.

I was blessed to meet her—and even more blessed to share a moment with her and God. I asked God to bless her and her family, and  that one day she would see Him.