Women, especially those with children, are so desperate to get money that they often receive only the price of a bottle of pop for their services

MBIKO, Uganda — Since forsaking life on the streets after 13 hard years as a prostitute, Mary Zema has helped hundreds of African women break away from a cruel existence that has caused almost all of them to become HIV-positive.

Now 61 years old, Zema began to drink after her parents threw her out of her house when she was 17. Before long she ended up at a night club in the Kenyan port city of Mombasa and from there was drawn into the sex trade. But Aunty Mary, as she is known, now runs a remarkable little Ugandan non-governmental organization known as Sanyuka. Funded by Samaritan’s Purse of Canada, it offers an 8-month, 12-step course to help women leave sex work behind. The goal is to teach women to provide for themselves by acquiring skills such as cooking, weaving, tailoring and braiding hair. They also learn to make and sell jewelry from gems and acquire the basics to run a small business as well as their own finances.

The life of a prostitute in Africa is especially brutal and not only because of the violence they suffer at the hands of many of their customers. The chilling fact is that nearly 70 per cent of the world’s HIV cases — some 25.5 million people — are in Africa, and the disease is often transmitted through paid sexual acts. 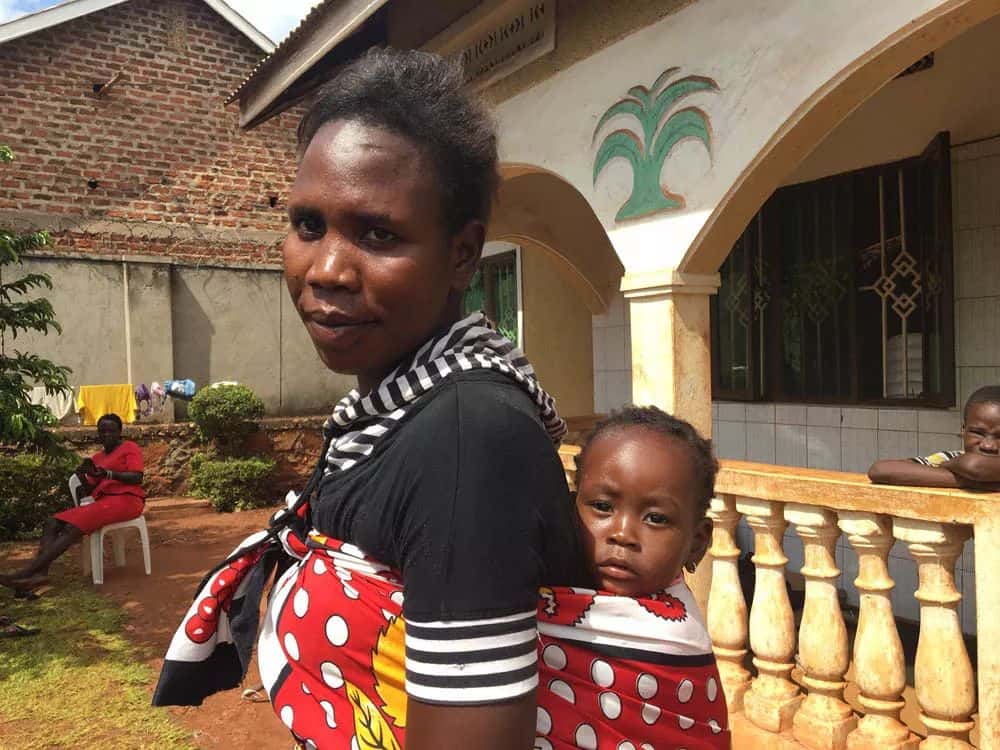 Women, especially those with children, are so desperate to get money that they often receive only the price of a bottle of pop for their services — assuming the man doesn’t refuse to pay them afterwards.

Despite such outrages many women remain prostitutes because there are few other options in the rural areas from which many of them come.

One of Aunty Mary’s charges is Vicky Annono, 30 years old and like her mentor a mother of three. Annono quietly recalled the night one man strangled her and left her for dead in a sugar plantation. To forget such memories she became a regular drug-user before finding refuge at Sanyuka, where she was able to develop marketable skills, get three meals a day and was safe from the pimps who used to run her life.

“Everything about prostitution is bad,” Annono said. “You must give your body to sustain yourself. If you have children there is sometimes no way except prostitution. I had no financial support so I took myself there.”

Choosing to abandon her old life and embrace Sanyuka’s strict regimen of clean living had been “rough,” Annono said. “There were so many rules such as you are not allowed to go out. But I decided to become part of this community.”

That Sanyuka has changed the lives of scores of women for the better could be heard and seen in the joyous dancing, singing and praying that rocked the modest house where they lived only a few metres away from the heavily traveled main road between Uganda and Kenya where they used to make their living.

“This area is well known for prostitution and drugs because it is where long-distance truck drivers rest,” Zema said after a church service crammed with women enrolled in the programme and their children, and others who had completed the programme and were now making a new life for themselves.

If they agreed to give Sanyuka a try and passed a rigorous one-week testing period, the first thing women entering the programme had to give up is what called “the pipe,” Zema said. The pipe is often stuffed with cannabis (hemp) and can be mixed with local herbs. Many sex workers believe smoking the pipe makes them more attractive to men, but its use is illegal in Uganda. “It is witchcraft. They invoke the spirits to protect them. They really want to smoke the pipe when they get here,” said Zema. They also had to forsake the talismans that many of them wore in the belief that they made them more attractive to men.

Sarah Akol was a prostitute for 13 years. Now 42 years old and a hairdresser, she came to Mbiko to support her two children.

“Because of the street I am HIV positive,” Akol said, recalling drunken nights when men called her “cheap goods” after having had sex with her. “I cannot go back to this life. The problem is that there are not enough other opportunities. Even when there are, we do not know about them.”

Akol proudly noted that she said she had already convinced 10 other women to get off the streets.

“It is a slow process but if you can get here you can be saved,” she said. “My old friends can see what I have become and they want to follow the same path. Even old neighbours have told me that they see the changes.”

Sanyuka receives its entire budget of $70,000 a year from Samaritan’s Purse, which sponsored Postmedia’s trip to Africa.

“There is great compassion for helping women out of sexually abusive and violent situations,” said Dorothy de Vuyst of Calgary who directs the charity’s African operations. “There is a desire on the part of the Canadian public to be engaged.”

About 80 per cent of the women who join Sanyuka do not return to the streets. That “speaks to the effectiveness of the programme,” de Vuyst said.

The way that a few brave women had been able to transform their lives provided an example and an inspiration to other women wanting to do the same, Mary Zema said. But until now Sanyuka was only able to help 10 women at a time.

“If we had enough space and money we would take them all,” Zema said looking beyond the walls surrounding the home towards the highway where truckers traveling from Kampala to Nairobi still stopped to spend time with less-fortunate women.