Houston after Harvey: ‘Please don’t forget about us’ 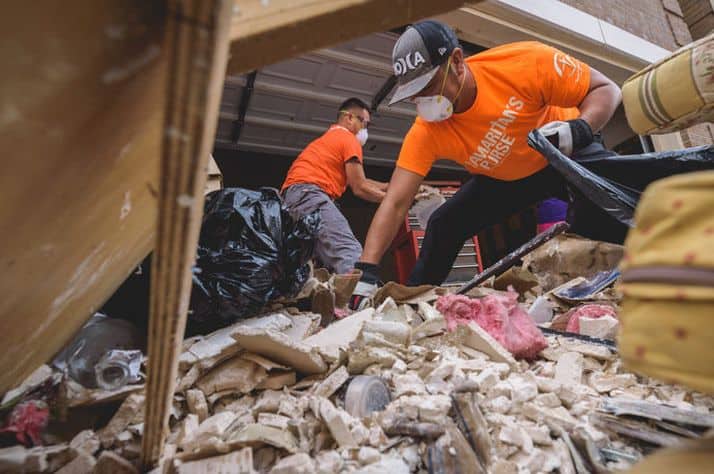 Samaritan's Purse continues working in Houston and other parts of Texas, helping homeowners in the Name of Jesus Christ.

Two weeks after Hurricane Harvey, schools have reopened in Houston—an encouraging sign that the city is beginning to recover from cataclysmic flooding.

But the neighborhoods around those schools remind residents just how far Houston still has to go. Thousands of flooded houses have been gutted, streets are lined with mounds of waterlogged debris, and it will be months before many families will be able to return home.

Samaritan’s Purse is committed to helping these families and is scheduling volunteer work crews for months to come. In the Houston area alone, more than 600 households have already asked us to help get their houses cleaned out so they can begin repairs and reconstruction.

A fifth-grade teacher named Paige Sherman expressed concern that the hardest-hit neighborhoods might be neglected as Houston presses forward. “Please, please, don’t forget about us,” she said. 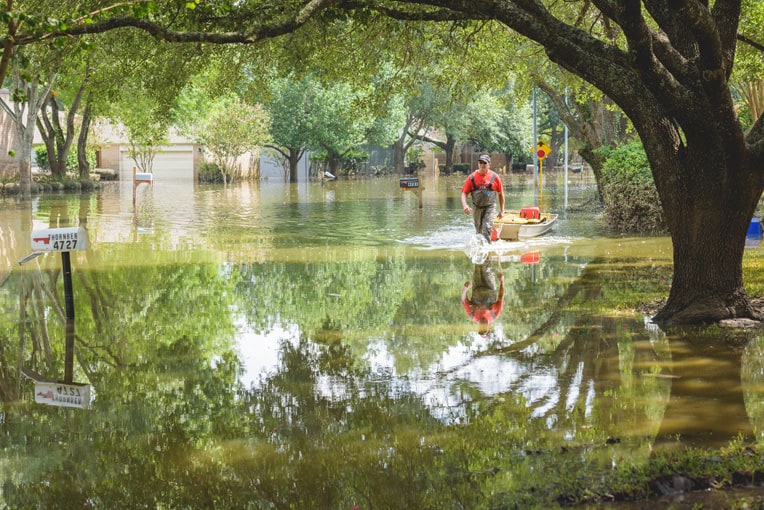 Paige Sherman and her family live in Bear Creek neighborhood, which was flooded after Hurricane Harvey’s powerful hit.

The house where Paige grew up and lives with her parents and son is among hundreds that flooded in the Bear Creek neighborhood west of Houston. Even as Samaritan’s Purse volunteers cleaned out their home, other houses in the neighborhood were still inundated with up to four feet of foul-smelling water.

Paige’s father, John Warren, laid off from the oil and gas industry, said he will teach himself how to hang and finish sheetrock so he can repair the house as soon as possible and bring his family back home. Like many of his neighbors, he did not have flood insurance. His house sits 109 feet above sea level, and even Houston’s frequent floods had never dampened his doorstep. 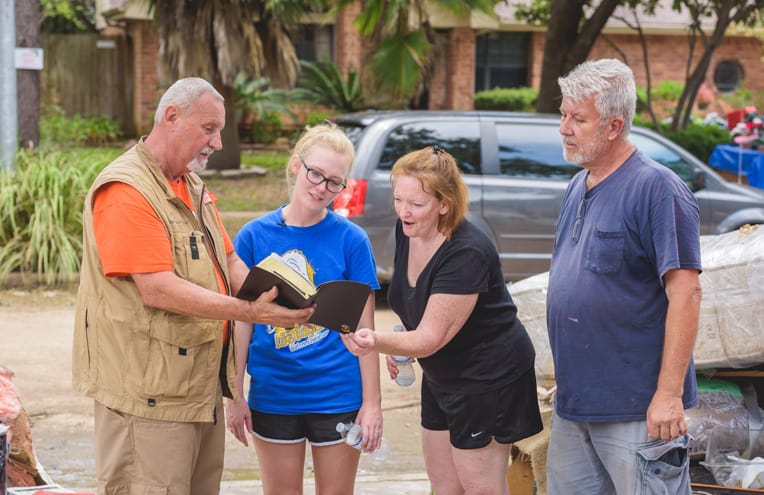 Paige and her parents receive a Bible signed by the volunteers who worked on their home.

As Harvey approached, the family moved a few valuables into second-floor bedrooms and left home for the night. “In our worst-case scenario, we never expected this,” Paige said.

When they returned, it was by boat. Water backed up behind the Addicks reservoir had risen more than a foot inside the house, ruining everything on the first floor and the two cars they had left in the driveway.

“We were in shock,” Paige said. “We’re trying to figure out what to do. Where do we begin? Samaritan’s Purse came in and knew exactly what to do. It was like this weight was lifted.” 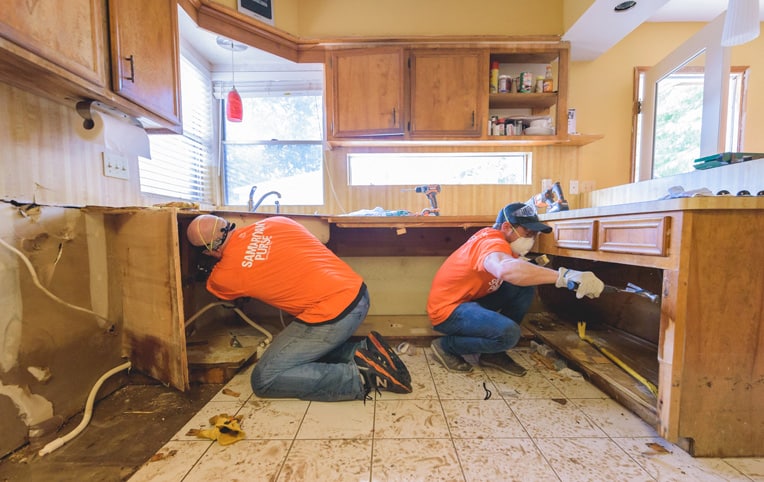 Volunteers rip out waterlogged cabinets in the Sherman’s home.

In two days, the orange-shirted volunteers who had come from across Houston and as far as Florida and Maryland finished cleaning out the house, gutting the kitchen, and spraying the structure to eliminate mold. Then the crew gathered at the curbside to present the family with a new Bible signed by each volunteer.

“Houston is strong,” Paige said. “We’ll get through this.” She pointed to her front porch, where her father had hung an American flag and a yard sign salvaged from the debris.

“It says, ‘God Made. Jesus Saved. Texas Raised.’ That’s our motto, going through this whole thing. It’s a constant reminder that we’re not alone, that God is here for us, and we will get through this.”

Samaritan’s Purse has disaster relief units set up at churches in five of the hardest-hit communities spanning 200 miles of the Gulf Coast. In addition to Houston and nearby Pearland, we have work in Santa Fe, Rockport/Portland, and Victoria. After the first full week of work, 3,266 volunteers had completed work on 488 houses in Harvey’s path—patching roofs, cutting trees, removing debris, and ministering to survivors in the Name of Jesus Christ. Through this outreach, more than 150 individuals have prayed to receive Jesus as their Lord and Savior. 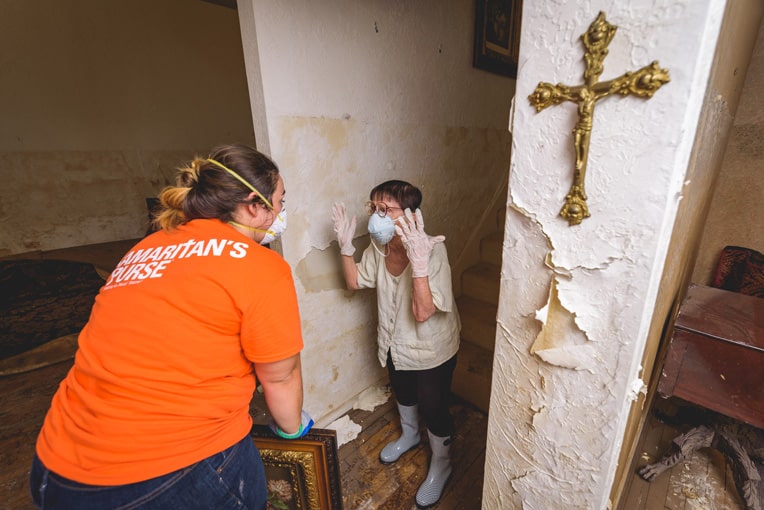 Laura Krueger lives one block from Buffalo Bayou and had to be rescued by airboat during Hurricane Harvey.

Countless others have seen their prayers answered and faith strengthened as God brought them through the storm. One woman named Laura Krueger said that if not for God’s protection, she would have been added to the list of more than 70 Texans who lost their lives because of the storm.

Harvey made landfall on Friday, Aug. 25, near Rockport, nearly 200 miles from Laura’s home near uptown Houston. She lives one block from the Buffalo Bayou, a meandering river that drains Houston. In 17 years, it had never flooded her home.

By Saturday night, she thought the worst was over. “I went to bed upstairs thinking: This is OK. No real wind. Not that much rain. We’ll be OK. We’ve been through a lot of floods here in Houston.”

She was awakened at 5:30 a.m. by the security alarm, and when she looked down her steps, she saw her furniture floating and her living room already flooded too deep for her to escape. All she could do was climb onto a tiny second-floor balcony and wait to be rescued. “Laura was in absolute terror,” her neighbor Donna Platt said. “She was crying, ‘I can’t swim!” 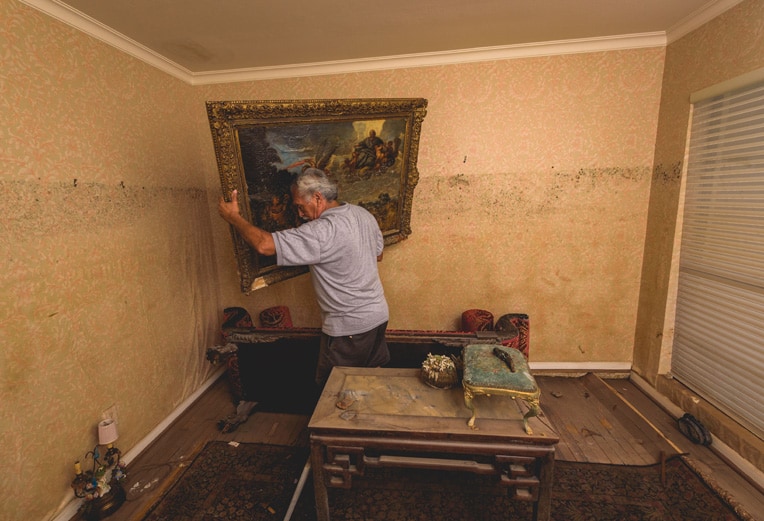 Laura’s beloved painting of Adam and Eve being cast out of the Garden of Eden was damaged beyond repair.

From balconies on the opposite sides of the alleyway, they waited for hours in relentless rain while the churning waters rose almost to the second floor. Finally, an airboat arrived and rescued them and their cats.

Laura is now living with her sister. She has flood insurance and hopes she can rebuild, but as she watched volunteers clean out her home, she said, “When I see this, I can’t imagine that it will ever be clean.”

At one point, she asked for prayers as she watched workers carried out a beloved painting of Adam and Eve being cast out of the Garden of Eden. It was obviously beyond repair. “Adam and Eve are going to go to the curb,” she said.

Across the street, Laura’s neighbor Donna worked with a Samaritan’s Purse volunteer to salvage porcelain from the wreckage and worked the phones seeking shelter for five cats she had rescued. “I do a lot of rescues,” she said. “Now I’m being rescued.”

Further down the street, a family of Iranian immigrants told how this was the second time in two years that they have been flooded since they moved to Houston. Our teams shared the hope of the Gospel with them as they cleaned out their house.

One young woman, inspired by the dedication and efforts of our orange-shirted Samaritan’s Purse volunteers, told a chaplain what she and surely many other Houston residents are feeling, “Our silver lining is orange.” 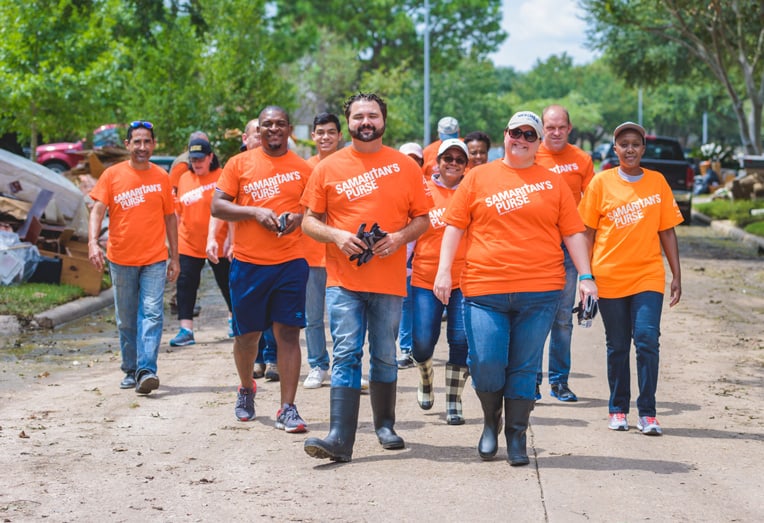 We praise God for the many volunteers who have served across southeastern Texas.