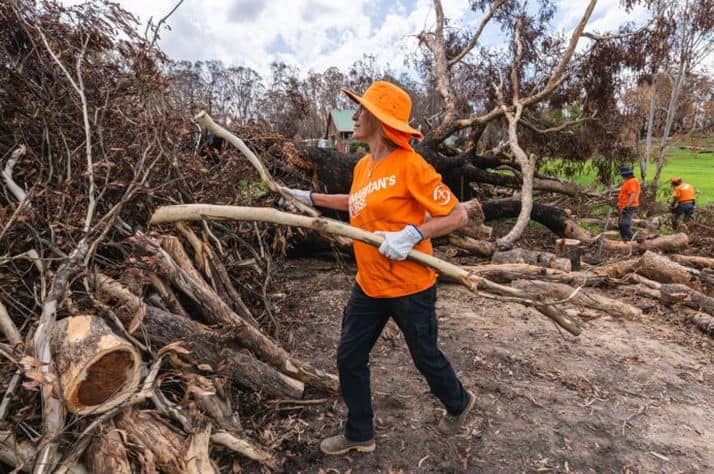 For weeks, dark smoke clung to the horizon in the southern Australian territory of Victoria—the wilderness was on fire. Nearby families desperately attempted to remove unnecessary brush from their properties, knowing it would serve as instant kindling should the wind shift and the fire barrel towards their homes. 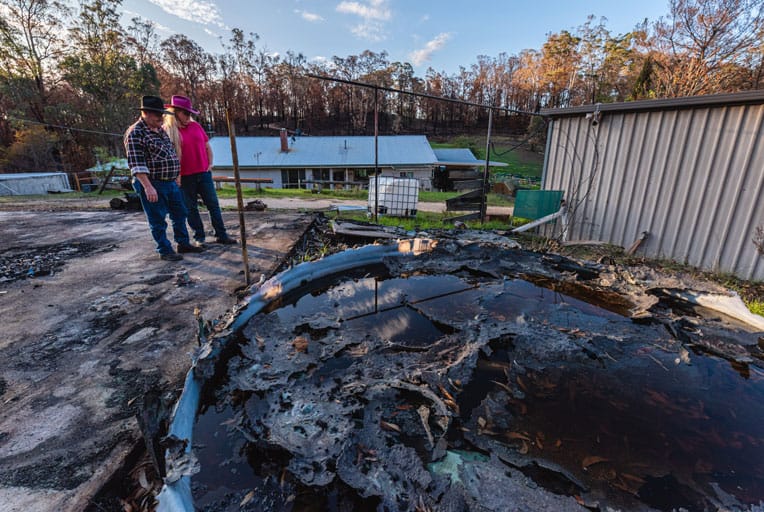 A water tank melted and released gallons of water that put out the flames near Shan and Rob’s home.

Rob and Shan Hutchings were no exception. They spent days clearing overgrowth and watering down the parched land surrounding their ‘forever home.’ Then the family received word from a neighbor that the fire had broken containment lines and their property, home, and family were in imminent danger.

“We came outside and there was this massive plume of smoke that seemingly came out of nowhere,” Shan said. “The fire was spotting three fires ahead of itself—straight for us.”

The couple scrambled to gather their four children—one of them in a wheelchair—and necessary items before fleeing their home. As they sped down the one access point to or from their home, the fire loomed in the distance and created small fire tornadoes swirling with embers and ash.

For days, they assumed the worst—that their home had been consumed by the fire. The couple finally returned to their property on New Year’s Day. As they approached, lush green pastures and forests had been replaced with burnt trees and black ash. Their hope of finding anything that survived the blaze plummeted. 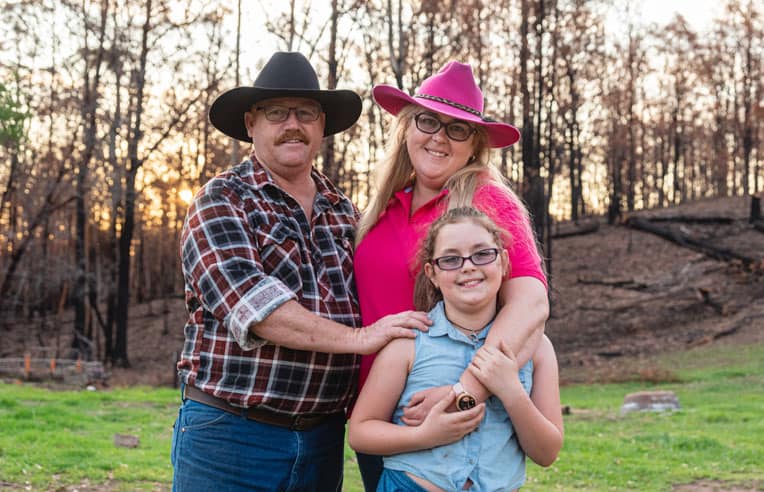 Rob, Shan, and their daughter Fern are grateful for our volunteers who demonstrated God’s love to them.

Yet, as they rounded the hill of their driveway, their home stood untouched—surrounded by blackened wilderness. “It was there and it shouldn’t have been there. “We just stopped and hooted and hollered and we hugged and we cried,” Rob said.

Though their home was spared, they lost two large sheds filled with tools and family memories. Samaritan’s Purse volunteers were glad to help them sift through the ash to salvage personal belongings. Team also cleared debris and removed the dozens of downed trees that cluttered their property.

Everywhere on their property were signs that the fire singed their home but fell short of engulfing it. Upon further examination, the couple realized that their two water tanks melted and released hundreds of gallons of water that extinguished the flames just yards from their home.

“The angels must have been fanning their wings at that water tank,” Samaritan’s Purse volunteer Amy Jarrett told Rob and Shan. “The way the fire came around, it should have taken your house. You’re not lucky—you’re blessed.”

After Hurricane Irma cancelled their vacation in 2017, Florida residents Amy and Mike Jarrett wanted to give back to the hurting community affected by the storm. They decided to volunteer through Samaritan’s Purse. “We first signed up for three days and then we just kept extending and extending and extending,” Amy said. 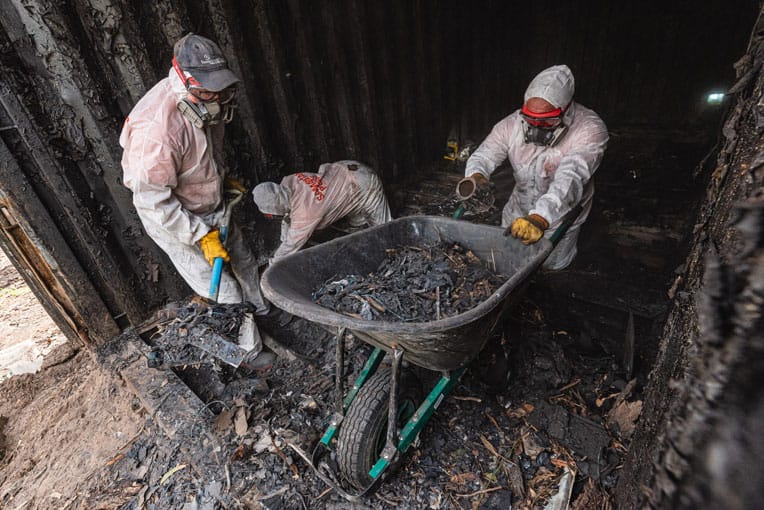 Amy and Mike (center and right) help sift through the ashes in search of a homeowner’s personal belongings.

God was working on the couple’s hearts as they volunteered. They had been running from the Lord for ten years. Yet, working with Samaritan’s Purse volunteers, they were reminded of the grace, love, and mercy that can only come from Him.

“I’d seen the love that we’d been missing,” Amy said. “When you’re running, you’re just doing your worldly things. You’re not thinking about anything else. When you get back in with your Christians and you get back into the Word, you see what you’re missing and the honest love, the grace, the mercy that God shows us every day.”

Now, they want to share that same love with homeowners affected by the devastating bushfires that have displaced thousands of families. “I hope they see the love and the joy that we carry along with us to uplift them,” Amy said.

Samaritan’s Purse has provided physical relief to dozens of families affected by these fires. Even more important than the physical aid, however, is the emotional and spiritual comfort that volunteers provide to a family.

Rob appreciates the men and women who worked on his property, both locals and those who came from across the world. He thanked them for their efforts and for “the friendships that you’ve managed to create and the smiles and the laughter.”

Samaritan’s Purse volunteers took some of the workload off of Shan and Rob, who were overwhelmed with everything they had to do following the fire. 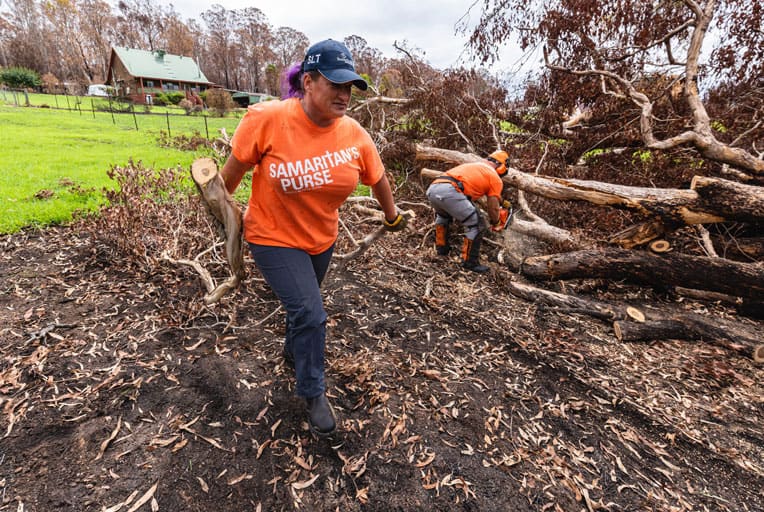 “They were hope in orange shirts,” Shan said. “They let us get on with other things while they worked our property for us. The difference that they made really gave us the ability to see then how we could take that next step.”

In Jesus’ Name, volunteers served Shan and Rob in the blistering heat—understanding that the physical work may be difficult, but the emotional relief for the homeowner is well worth it.

“We’re there to love on them—talk to them, listen to their stories,” Amy said. “Just let them talk, and if we’ve been through a certain same circumstance, say ‘Hey, I understand, I’ve been there.’”

Rob and Shan will be forever grateful to Amy, Mike and the rest of the Samaritan’s Purse volunteers who worked on their home and moved their hearts.

“Thank you just isn’t enough, there aren’t enough words,” Shan added. “It made our community bigger and the world smaller.”

Please continue to pray that the Lord would work in and through our volunteers as they help hurting families recover from these devastating fires.