God uses specialty doctor to save lives in Cameroon 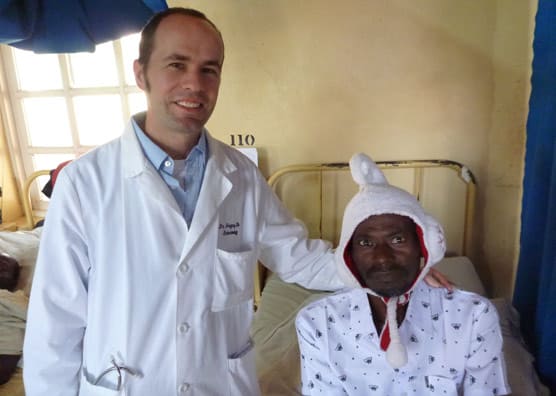 Canadian endocrinologist Dr. Greg Kline learns how God can use a specialty doctor to minister to people in Cameroon, Africa.

Dr. Greg Kline is a Canadian endocrinologist who recently served at Mbingo Hospital in Cameroon for two weeks. This was his second trip with World Medical Mission.

I was blessed to be invited to Mbingo Hospital in a rural part of the Northwest Region to spend two weeks providing intensive endocrinology training for eight Cameroonian physicians in residency.

One patient in particular had a tremendous impact upon the residents and me. This young man had been wasting away for six months to the point where he was bedridden, hospitalized, and barely responsive. He looked like he was already dead.

He had been aggressively investigated for all sorts of medical disorders, including a comprehensive search for various types of infections or cancers. Nothing was found, and he failed to respond to numerous antibiotics.

After much thought, we decided to consider a diagnosis of adrenal insufficiency. I recommended that the residents test their hypothesis by giving him just 5 mg of prednisone, which would otherwise be harmless if our diagnosis was wrong.

The very next day we came by on ward rounds, and when we stopped in front of the man’s bed, he sat up straight and said, “Hello,” and, “I want to eat!” We were absolutely astounded. From that point on, we called him “Lazarus.” He was discharged from the hospital within a week. “Encephalopathy Addisonienne” has all but disappeared in the West, but apparently it still happens elsewhere.

When I was a medical resident, I chose to specialize in endocrinology because I loved it. However, I’ve felt guilty at times, thinking that I would have been more useful to God had I chosen a surgical or procedural specialty.

“Lazarus” has shown me I was wrong. And on my first trip with World Medical Mission, a little girl in Ghana, who was going to die of Type I Diabetes because of a lack of insulin, also showed me I was wrong.

They, among other patients, were people to whom God brought me, in whose cases my skills were exactly what they needed. I have now learned that God can use anyone, even an academic endocrinologist, to serve His people and accomplish His purposes.