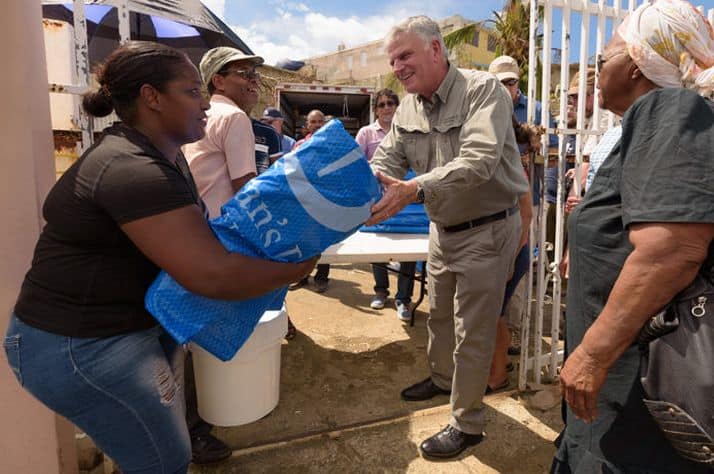 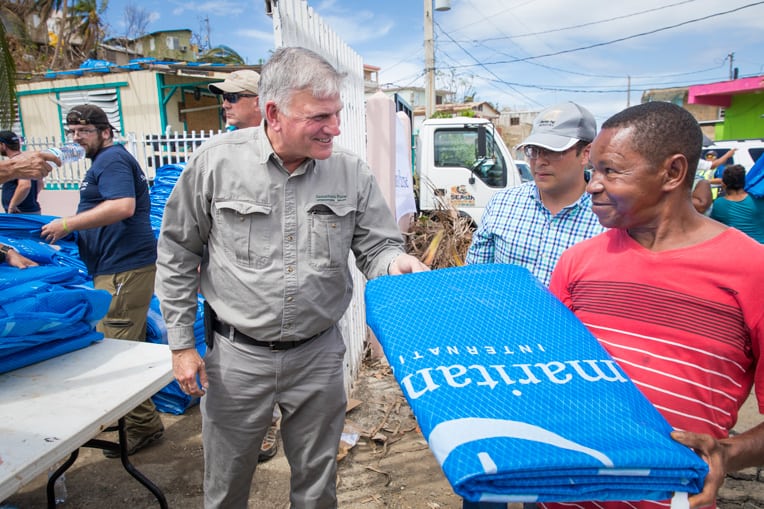 Samaritan’s Purse President Franklin Graham was on the ground in Puerto Rico Monday to lead our teams in assisting storm-weary residents in the Name of Jesus Christ. Hurricane Maria caused massive devastation when it blasted the island on Sept. 20.

Flying over the battered U.S. territory by helicopter, he was moved by the devastation left in the wake of the Category 4 storm. Its 155-mph winds and torrential rains stripped and snapped trees, toppled concrete telephone poles, ripped off roofs, pulverized houses, crippled communications, and isolated mountain communities.

“Hurricane Maria didn’t just devastate San Juan but Puerto Rico from one end of the island to the other,” Graham said. “We’re working not just in this city, but across the island. Our cargo DC-8 comes in every few days carrying supplies, and we also have a helicopter now so we can get to the remotest parts of the island quickly. We’re going to be here for a while.” 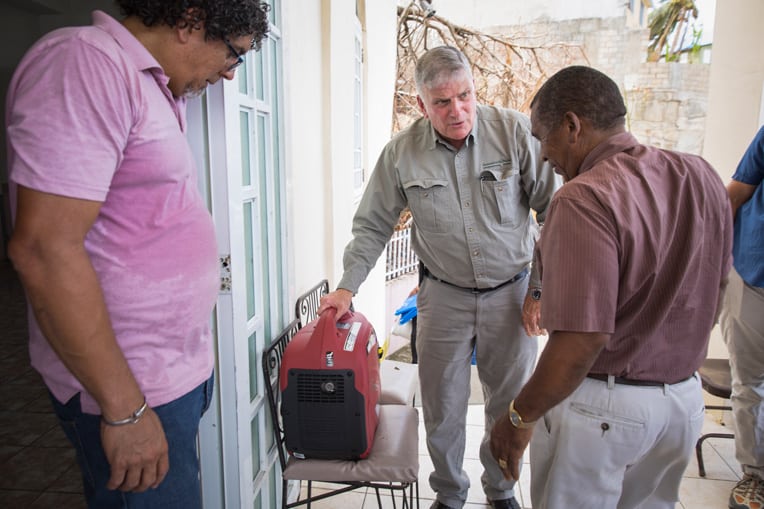 Franklin Graham provided Norberto Colon, a local pastor, with a new generator and took the time to get it up and running.

Graham also took part in a distribution to provide 800 households with heavy-duty shelter tarp, solar flashlights, and plastic buckets to carry fresh water. The distribution was held at the Evangelistic Association Operation Liberty Church in Canovanas, a town of 48,000 people about 17 miles southeast of San Juan.

When Graham first arrived, he met Norberto Colon, the pastor of the church. “Thank you for coming,” Colon told Graham, to which he replied, “We’re glad to be here to serve.”

Then Graham jumped into action. He first passed out buckets to residents who will need them to collect clean water at government sites. Then he started handing out blue tarp, placing it into each person’s outstretched arms. 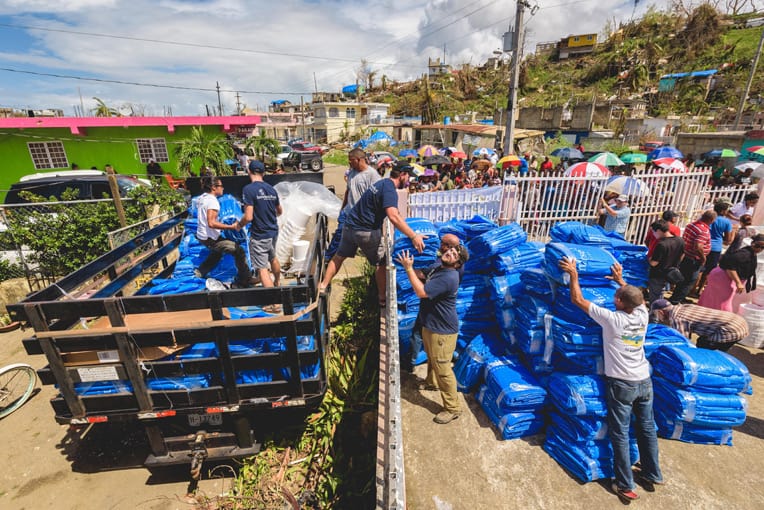 Samaritan’s Purse is distributing tons of relief supplies to thousands of families in Puerto Rico.

Graham next tackled a project high on his priority list. We’ve been providing portable generators to local churches because the island is still without electricity. Graham worked with Pastor Colon and one of our team members to make sure the 2,000-watt generator worked properly. After pouring in the oil and fuel, Graham grabbed the starter chord and began pulling it. As soon as it started, the pastor raised his hands and proclaimed with a loud voice, “Praise the Lord. Praise the Lord.” Graham responded with a hearty “Amen.”

As the distribution was winding down, Graham said, “People may ask ‘Why are we doing this?’ Well, whether it’s here or anywhere else in the world, we’re here in Jesus’ Name. He cared for the poor. He cared for those who were suffering. And He would want us to do this. We want to help these people who have lost so much, to help them with a little bit to get them back on their feet again.”

“Whether it’s here or anywhere else in the world, we’re here in Jesus’ Name. He cared for the poor. He cared for those who were suffering. And He would want us to do this.”
—Franklin Graham

Leading up to today’s distribution, we have already passed out emergency supplies to 1,700 households on Puerto Rico. Thousands more families will be helped in the days ahead.

Thankful for the First to Respond

Our first distribution on Puerto Rico began on Sept. 27. Working in partnership with a local church, we knocked on doors in a hard-hit neighborhood in Canovanas to deliver needed supplies and to offer the hope of Jesus Christ. Again and again, people thanked us for caring about their plight. 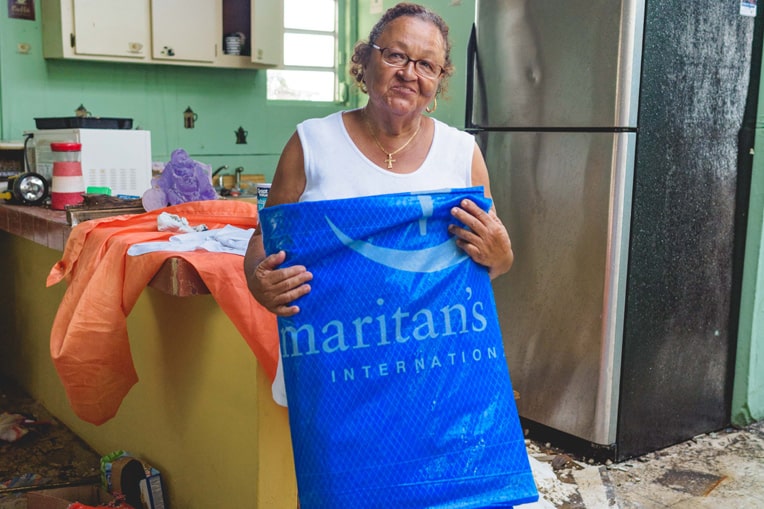 The Honorable Lornna J. Soto Villanueva, mayor of Canovanas, expressed her appreciation to Samaritan’s Purse for all we’ve done for her town. “As you are aware making Puerto Rico return to its former state will require enormous efforts,” she wrote thanking our team. “We are grateful that your company has been the first to respond in helping our town. Because of you we now have hope.”

Over the weekend we distributed relief items to a different neighborhood on the outskirts of San Juan and teamed with another local congregation, Good Samaritan Church.

Doris Silva Morell owns a concrete, two-story home near the church down a long, winding alleyway wide enough for only two people. She lives downstairs, and her 38-year-old daughter Madeline and two young children live upstairs. They weren’t there when Hurricane Maria hit, but upon their return, they screamed and broke down in tears. The tin roof was shredded, and all the furniture and belongings on the second flood were drenched, ruined. Everyone now is crammed downstairs, hoping to restart once they clean up.

Doris received our blue, heavy-duty shelter tarp to place atop the house to keep the rain out from now on. She’s also thankful for the hygiene kit we gave her.

“You were the first people to come here to give us a hand,” Doris said. “We’re asking the Lord to give us the faith to keep on and to give us the strength to start all over again. I thank God for everything I still own.” 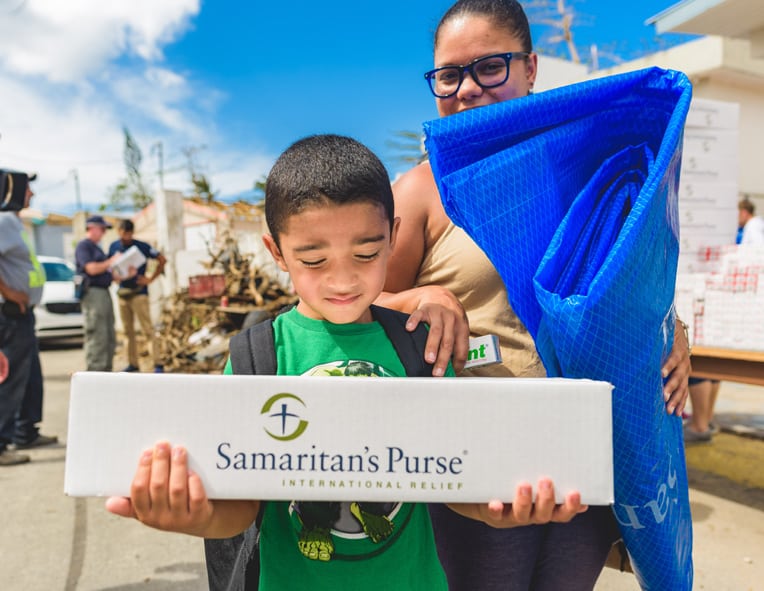 Rayda Cortes lost half of her roof in the storm. She, too, voiced her gratitude to Samaritan’s Purse for the shelter tarp, hygiene kit, and toothpaste and toothbrushes. “My 6-year-old son Leon is autistic, and I’m a nurse working 12-hour shifts, so I don’t have the time to go to a store and purchase materials like these,” she said. “This whole thing is so stressful. I’m so grateful you came here to provide these simple essentials.”

Following the distribution, Natividad Rodriguez, pastor at Good Samaritan Church, asked our volunteers to gather for a word of thanks, singing, and prayer. Her husband Enrique was pastor of the church for 39 years until his death eight years ago. She’s continued since then.

“This storm opened a window for our community to know that Christ is alive and that God is big and marvelous,” she told our team. “It was so nice to see Christians showing God’s love to our non-Christian neighbors.”

Another pastor who has received help from Samaritan’s Purse is Dr. Efrain Sostre Ruiz, pastor of Church of Restoration in Fajardo, located on the island’s eastern coast. He served as the office administrator for Festival of Hope in San Juan.

The church has been designated by the government as a shelter for the displaced, but it has no electricity because of downed powerlines. Last Saturday, we delivered fuel and a portable generator to the church, along with bottled water.

Upon receiving these items, Dr. Ruiz choked back his emotions. Considering the enormous impact that Samaritan’s Purse and the local church can have on a hurting community, he quoted from Matthew 25 when Jesus said, “I was hungry and you gave Me food; I was thirsty and you gave Me drink; I was a stranger and you took Me in” (NKJV).

The ripple effect will be felt as we continue reaching out in Jesus’ Name. We’re exploring new ways to expand our outreach to the beleaguered island. We recently sent a team to Ponce, Puerto Rico’s second largest city, to explore the possibility of establishing a second base of operations on the south-central coast to assist people in yet-to-be-reached mountain areas.

Before Hurricane Maria ripped through Puerto Rico as the strongest storm to hit the island in almost a century, Hurricane Irma dealt a glancing blow in early September. Shortly after Irma, Samaritan’s Purse set up an air and logistical hub on the U.S. territory. Via our DC-8 cargo plane, we dropped off relief supplies in San Juan, which we then flew on other aircraft to multiple hurricane-ravaged Caribbean islands, including St. Martin, Antigua, and Turks and Caicos. 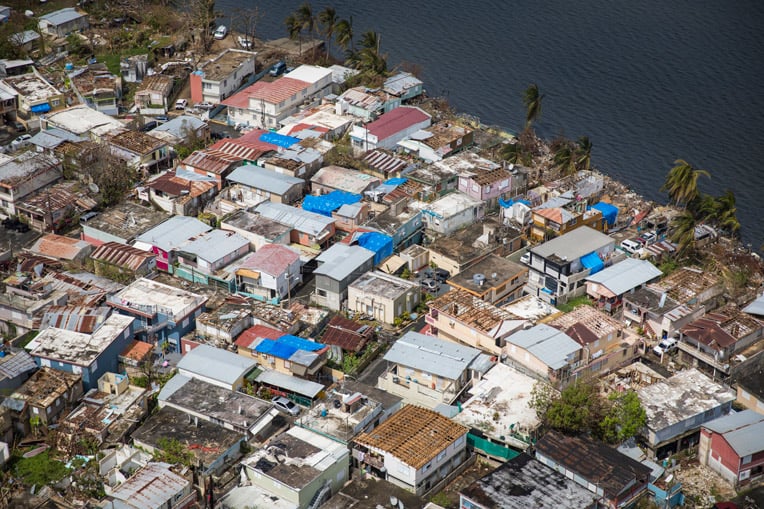 Hurricane Maria ripped off many roofs in this neighborhood near the shore of Laguna Los Corozos. Our blue shelter tarps are helping prevent further damage.

Our Puerto Rico response transitioned after Hurricane Maria roared ashore. While continuing as a hub for our Caribbean-wide work, we quickly began airlifting more emergency supplies to the island to be distributed among distressed residents there. Our disaster assistance relief team of five grew to more than 25. Our leadership continues to meet with government officials and church leaders to determine how we can best serve people here and show them the compassion of Jesus Christ.

In addition to ongoing work in Puerto Rico, Samaritan’s Purse maintains five volunteer bases in Texas after Hurricane Harvey and two sites in Florida after Irma. We have teams in Dominica and Antigua/Barbuda as well responding to the recent storms.