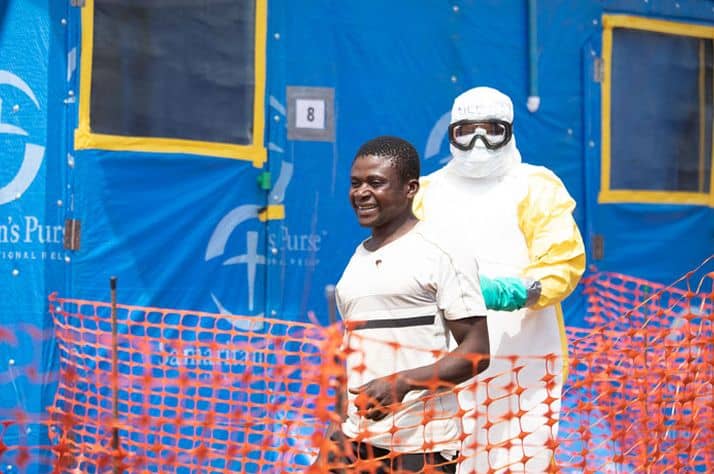 Our initial patient in the Democratic Republic of Congo feared he would die quickly from the disease, but instead found salvation in Jesus Christ. After four days of care, it was confirmed he did not have Ebola, and he was released to start a new life.

As a major Ebola outbreak spreads in eastern Democratic Republic of Congo (DRC), Samaritan’s Purse remains at work on the front lines. Our doctors, nurses, water sanitation and hygiene specialists and other essential staff are operating a newly established 18-bed Ebola Treatment Center in the remote area of Komanda.

Fear has gripped the region as the second deadliest outbreak of the disease in history continues. The current fatality rate is around 60 percent; there have been 384 confirmed deaths as of Jan. 21.

Kavoro was the first patient to arrive at our Ebola Treatment Center. He came presenting five signs of Ebola—nausea, a sore throat, abdominal pain, a headache and dizziness. Given these symptoms and his previous contact with an Ebola patient, he automatically became a suspect case.

As he was admitted to the isolation unit and awaited test results, he was terrified and angry. Ebola is considered a death sentence in the DRC. He desperately wanted to flee.

Dr. Ingrid Donato, dressed in full personal protective equipment, pleaded for Kavoro to be patient with our team. As they prayed, Ingrid felt God’s peace come over his room. Slowly Kavoro began to soften. He understood that his best chance of survival was to allow the doctors and nurses to care for him.

For four days, medical staff provided hands-on care while showing compassion and love. When Pastor Joseph, a member of the psychosocial support team asked Kavoro if he had any specific prayer requests, he without hesitation asked for healing.

Kavoro began to recover. He started sitting outside his room, observing the staff as they worked.

“A lot of sharing the Gospel is how we live,” said Emily Way, a nurse who treated Kavoro. “He watched all of our interactions in this compound, and he was taken aback by it. It caused him to ask questions of our physicians and psychosocial support—asking what made us different.”

He wanted to know why strangers would risk their own safety to care for him. This opened the door for Pastor Joseph to share the hope of the Gospel of Jesus Christ. The Lord opened Kavoro’s heart, and he made a commitment to follow Him.

After receiving two negative Ebola tests, he was cleared to go home.

Kavoro not only received freedom from the isolation unit that he initially wanted to flee, but true freedom in Christ.

“The nurses showed me love and gave me anything I asked for. When I came here I was in a bad situation, but now I am strong,” Kavoro said. “They gave me courage. I am strong now because Jesus helped me, which is why I accepted Jesus.”

Kavoro’s physical demeanor shifted with his new profession of faith. He said that even in the isolation unit, he no longer felt afraid because he had Jesus with him.

“When I came here I was in a bad situation, but now I am strong. I am strong now because Jesus helped me.”

He entered the Ebola Treatment Center filled with anger and left overflowing with joy and laughter. As he was discharged he had one request—a Bible in his own language.

“I am very happy to get into the family of Christ,” Kavoro said as he received a new Bible.

That same day he began to share the good news with his community—thanking Samaritan’s Purse for saving his life.

Samaritan’s Purse is seeing God’s hand at work in the DRC. It will be impossible to ever know the full impact that the Ebola Treatment Center has in the nation, but Samaritan’s Purse is committed to taking advantage of every opportunity to be the hands and feet of Jesus Christ. We are continuing to treat new patients as they arrive.

The importance of the unit is already being felt throughout the community. Now anyone in the area presenting symptoms similar to the deadly virus is able to receive isolation and treatment. This is an essential piece in preventing the spread of Ebola.

Please pray for those suffering from Ebola in the DRC and for the Samaritan’s Purse team as they stand ready to combat the horrific disease. 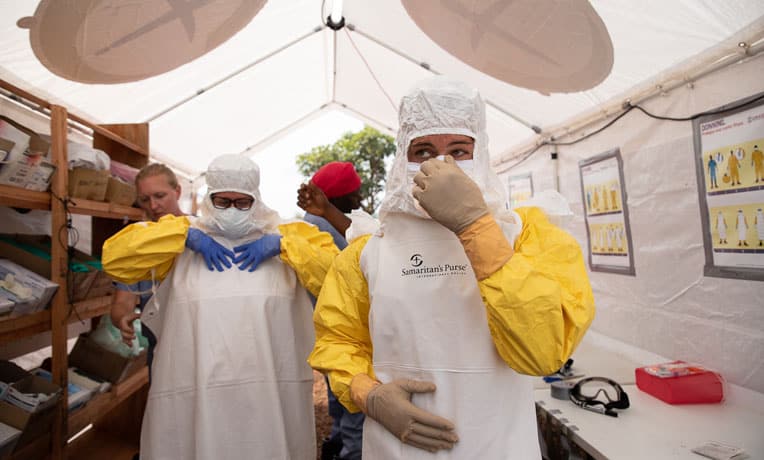 Samaritan’s Purse medical teams must don personal protective equipment before caring for Ebola patients. Our teams continue to demonstrate God’s love to hurting people in the Democratic Republic of the Congo.

Samaritan's Purse is ready to respond at a moment’s notice whenever and wherever disaster strikes. We specialize in meeting critical needs for victims of conflict, natural disaster, famine, and epidemics throughout the world, often working through local ministry partners to do so. We provide emergency food, water, shelter, medical care, and other assistance in the Name of Jesus Christ.
Top Stories
Distributing Medical Supplies in Ukraine
Relief Work Wraps Up in Ottawa and Hay River
“Samaritan’s Purse has Helped Me so Much”
A Father’s Journey to Overcome Hunger
Equipping Unsung Heroes to Deliver Relief Deep Inside Ukraine