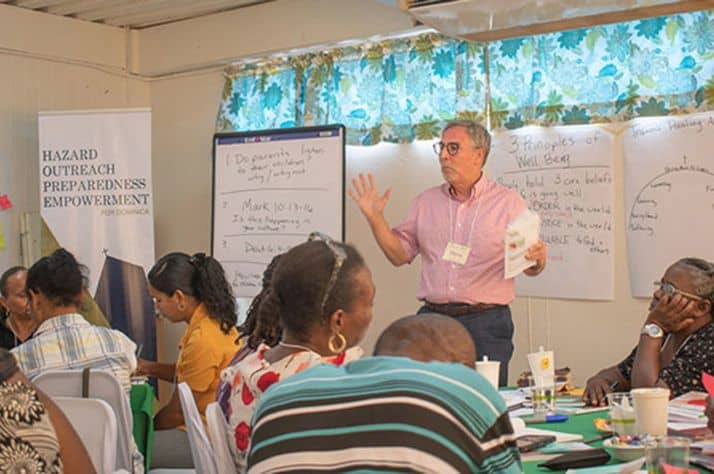 Samaritan’s Purse is equipping church leaders on this Caribbean island with tools to assist their communities when disaster strikes.

Hurricane Maria devastated the island of Dominica on September 18, 2017. The Category 5 storm directly affected 90 percent of the population, causing $1.37 billion in damages. The island is not only vulnerable to hurricanes, but also tropical storms, landslides, floods, tsunamis, and volcanic eruptions.

Samaritan’s Purse surveyed church leaders in Dominica in 2018 and found that only 43 percent felt prepared before Maria hit, revealing a need for the Dominican church to become more educated in disaster preparedness. 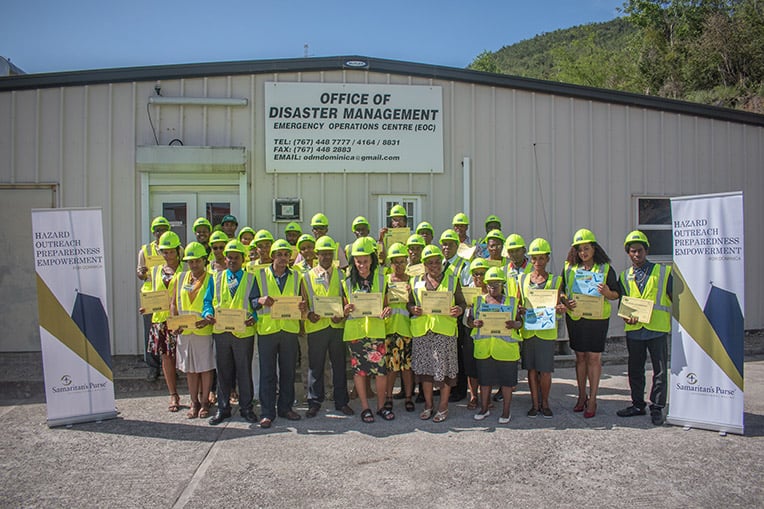 Thirty-four pastors and church leaders participated in the training.

Launching the Hazard Outreach Preparedness Empowerment (HOPE) program, Samaritan’s Purse is equipping church leaders across the island to respond to future disasters through interactive training sessions. From house fires to hurricanes and other disasters, the program aims to help churches better provide relief to hurting communities.

In addition to offering practical resources and trainings on disaster mitigation, the HOPE program also committed to engaging a deeper issue. While statistics indicate the physical damage caused by Hurricane Maria, it remains difficult to quantify the emotional pain experienced by the resident population.

During the annual hurricane season, which just closed, those who survived Maria relived the pain caused by events from almost two years ago. The storm represents only one piece of the puzzle, as people have faced other traumatic events in their lives as well.

In late June, the Samaritan’s Purse HOPE program partnered with the American Bible Society to conduct a four-day trauma healing training for 34 church leaders and pastors. Participants discussed the theology of suffering, forgiveness and reconciliation; how to manage grief and listen well; the difference between physical and emotional wounds; and much more.

The sessions were well intermixed with morning devotions, worship, seminars with certified teachers, and group discussions. About midway through the week, participants engaged in an activity where they wrote down things burdening them on pieces of paper, laid them at the foot of a cross, and destroyed them, symbolizing how Jesus Christ’s death on the Cross conquered all. This impactful moment moved many to tears.

“I feel equipped to do what God has called me to do.”

“I feel cleansed. I am feeling very spiritual. I have never been to a function like this one,” said Pastor Elvis Francis.

This event gave church leaders from different areas the opportunity to unite as the body of Christ. Absorbing information provided by the trainers and hearing the personal testimonies of others profoundly moved Pastor Elvis.

“I feel equipped to do what God has called me to do. I have a big heart for people now,” he said.

Following the training, Elvis feels empowered to be patient with others—listening to their stories before he makes any assumptions. He understands that, as a pastor, it is his responsibility to know his congregation and help them heal from trauma they have faced. Now, he feels prepared to put this into action.

Training People to Equip Others

Davidson Lawrence, a firefighter in Dominica, was also grateful for the help he received during the week.

“This is very valuable information,” he said. Davidson recognizes the importance of this training, and plans to pass the knowledge he acquired to those who were unable to attend the trauma healing sessions. 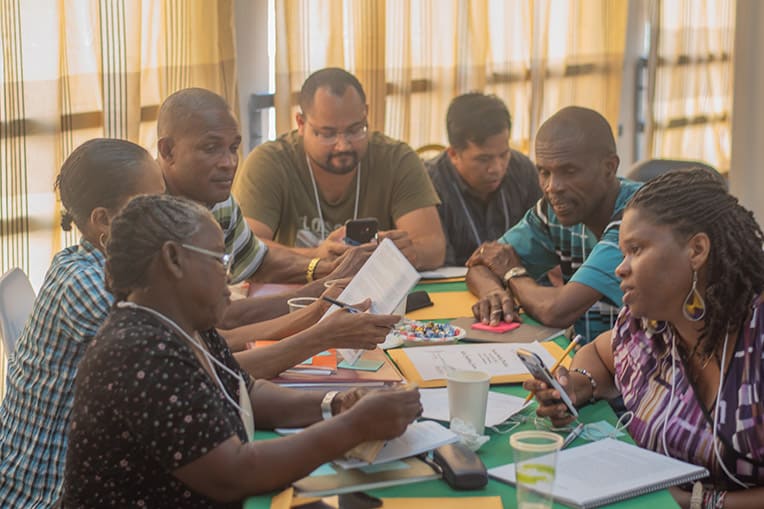 Elizabeth Serrant attended the trauma healing training for a second time, which placed her in the advanced sessions to train group facilitators. With 38 years of experience as a teacher and assistant principal, she is accustomed to both learning and sharing her wisdom with others. She had already led two successful trauma healing groups of her own.

At the end of the week, Elizabeth was certified as a training group facilitator, which qualifies her to empower others to become leaders in psychosocial support. “Trauma healing is necessary. It is relevant in our present situation,” Elizabeth said.

At the end of the training, pastors and church leaders shared testimonies from the week. Their stories were characterized by personal transformation, mention of beneficial skills received, and much gratitude. Those who attended gained healing for themselves, and are now equipped to share this gift in their communities.

“I think Samaritan’s Purse is doing a wonderful job on the island of Dominica,” said Pastor Elvis. “I used to watch Billy Graham and Franklin Graham on television. Thank God we have you on the ground for us now.”