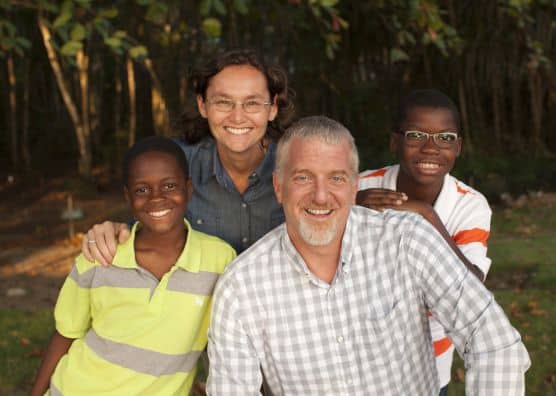 The Ebola Virus epidemic in West Africa created many accidental heroes. The Kauffeldts are among them. Working with Samaritan's Purse in Liberia, they are learning from Ebola's harsh lessons.

West Africa is still suffering from an Ebola epidemic that has claimed thousands of lives, destroyed families, and crippled communities.

With infection rates finally dropping in the hardest-hit countries of Liberia, Guinea, and Sierra Leone, those who were—and still are—on the front lines now say the battle is to keep the disease from flaring up again.

With experience, education, and resources in place, Samaritan’s Purse front-line workers are cautiously optimistic, but acknowledge the life-and-death struggle could worsen again at any time. 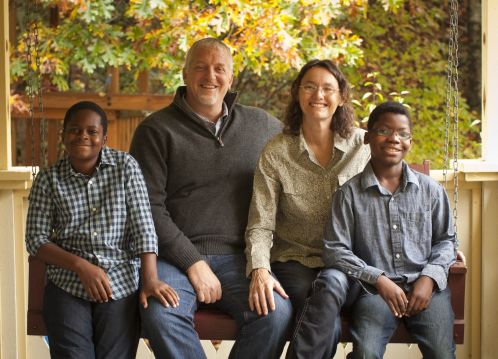 Among them were Canadians Bev and Kendell Kauffeldt who, after working for Samaritan’s Purse in Liberia for the past decade, found themselves in the fight of their lives against one of the most ravaging diseases on the planet.

Life in impoverished Liberia, which is still recovering from a long civil war, wouldn’t be described by most as ‘calm.’ But if there was a time of relative calm for the Kauffeldts, it was prior to the phone call in March, 2014  telling them of a minor outbreak of Ebola in neighboring Guinea.

“I just remember thinking ‘What? Ebola? Are you kidding me?'” Bev recalled.

The Kauffeldts administered Samaritan’s Purse community development, clean water, and ministry projects prior to the Ebola outbreak. When Ebola hit Guinea, the Kauffeldts along with their sons Felix and Isaac, were among the expatriate staff sent out of the country while the outbreak was monitored. At the time, it was believed to be under control.

The Kauffeldts, like the rest of the world, soon realized how premature this optimism was. The outbreak has now infected more than 22,000 people and claimed about 9,000 lives. It is widely accepted that those figures are very conservative due to underreporting.

Using contacts established through its development projects and Operation Christmas Child program, Samaritan’s Purse launched an Ebola education campaign that has since reached more than one million people with information about how to avoid contracting or spreading the virus.

But nothing could keep Ebola at bay.

The Kauffeldts returned to Liberia in May, 2014  and by mid-June the ELWA Hospital in Liberia’s capital city, Monrovia, reported its first Ebola cases.

Kendell said an influx of refugees from neighboring Sierra Leone—which shares a porous border with Liberia—and the misdiagnosis of one family began the nightmare.

“A family of six arrived in Monrovia with all members positive for Ebola,” said Kendell. “They all died, and so did the nurse who cared for them.”

In a short time, the number of infections and deaths from Ebola grew rapidly. Samaritan’s Purse’s development projects were put on hold and staff efforts were redirected to caring for patients at Ebola Treatment Units (ETUs) and spreading the word through our Ebola education campaign. Bev was given the arduous task of removing the bodies of Ebola victims.

To ensure their safety and prevent further spread of Ebola, Bev and all other front-line workers wore personal protective equipment (PPE) including a full-body hooded suit, two pairs of gloves, goggles, and a face mask.

Bev describes the experience of being in the full PPE in Liberia—where temperatures in July are consistently higher than 30 ° C—as “being buried alive, very claustrophobic,” as sweat and condensation would fill up in the goggles, and breathing was labored in the face mask.

Due to the high risk of disease transmission, families weren’t allowed to perform traditional preparations of the bodies of loved ones who had died from Ebola.

Bev says standing in the full PPE alongside weeping family members and being unable to provide comfort through a simple hug or holding the hand of a grieving family member was as emotionally painful as it was physically challenging to don the gear.

“There was a five-year-old boy who had lost his home, and his whole family, and I couldn’t even give him a hug,” Bev recalled. “But when you’re working 16 hours a day, there is no time to think about the emotional aspect. Everything had to be done in the safest way possible.”

It was a daily spiritual battle for Bev to keep her fears and anxieties at bay so she could carry out the difficult task at hand.

Bev says reading Psalm 91 daily “kept the devil at bay” and gave her the strength to move forward each day:

“He alone is my refuge, my place of safety;

He is my God and I trust Him.

For He will rescue you from every trap and protect you from deadly disease.”

When one Ebola patient died laying on her side, drenching in blood the Bible she had tucked under herself, Bev was left with a painful decision.

“I had to burn that Bible,” Bev recalls of the difficult necessity of strict and thorough infection control. “Nobody signs you up for having to burn a Bible. It was very surreal, but it was my job. We were inundated in a way that we couldn’t control. I saw the gates of Hell in that ETU.”

In the fall of 2014, Samaritan’s Purse redirected  its efforts to a community-focused approach—establishing two Community Care Centers for Ebola patients, ramping up  its Ebola education efforts even more, distributing infection prevention and control kits that could protect families from contracting the illness and making training available for families who wanted to care for infected loved ones at home.

Even though Ebola is now claiming fewer lives and garnering much less media attention, the Kauffeldts say the Ebola threat is far from over.

“Little fires pop up and we have to get in there and stop them before they really flare up,” said Kendell. “We actually need to work harder now than before as our response needs to be quick, rapid, like a SWAT team.”

Current efforts  align with a recent report from the World Health Organization: “The response to the [Ebola Virus Disease] epidemic has now moved to a second phase, as the focus shifts from slowing transmission to ending the epidemic. To achieve this goal as quickly as possible, efforts have moved from rapidly building infrastructure to ensuring that capacity for case finding, case management, safe burials, and community engagement is used as effectively as possible.”

In 2015, Samaritan’s Purse Canada anticipates needing at least $5 million in order to:

A $2.6-million grant Samaritan’s Purse received from the Canadian government provided more than half of the necessary funds.