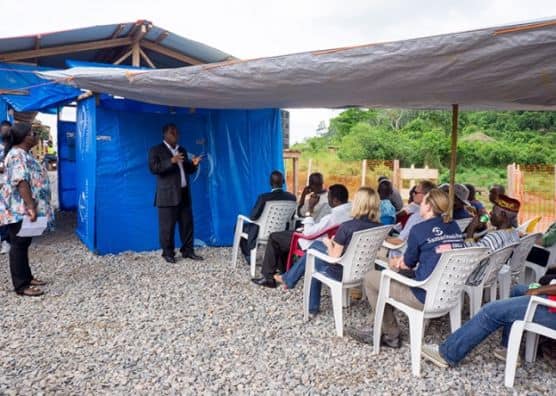 The new facility is the only one of its kind in southeast Liberia.

On December 2, 2014 Samaritan’s Purse opened the first Ebola Community Care Center (CCC) in southeast Liberia. Months of work culminated in a ceremony attended by our staff and numerous local leaders. The 15-bed center is located in Fish Town in River Gee County.

“The CCC will ensure any suspected or confirmed cases of Ebola virus disease can be isolated in a facility where they will receive excellent care, and their families will be supported by psycho-social counselors,” Dr. Nathalie MacDermott, the Community Care Center program manager for Samaritan’s Purse Liberia, wrote in an email from the field. “This will prevent spread of the disease to family members and the wider community.”

Community and county officials praised God and thanked Samaritan’s Purse for its dedication to the people of the area, both before and during this year’s outbreak of Ebola virus disease. Fish Town’s grand chief described Samaritan’s Purse staff as “the people who go to the hard places in Liberia and do good work.” We have had an active country office in the nation for more than a decade, completing various relief projects and developing deep relationships with churches and communities. 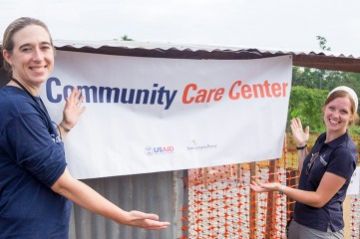 Dr. Nathalie MacDermott (left) and Nurse Judith Hoover were glad to see the center opened after months of hard work.

Although there are currently no confirmed cases in the immediate vicinity of Fish Town, it is possible that some suspect cases will surface in the region now that a care center has opened. Because the wider outbreak remains active in Liberia, Sierra Leone, and Guinea, Ebola can pop up anywhere in West Africa at any time. The disease has shown a knack for reappearing even after days with no cases.

Before the opening of our center in Fish Town, the nearest Ebola treatment facility required multiple days to reach traveling by road. Families were separated from their relatives and sometimes had no way of even knowing if they were confirmed positive or not. This will no longer be the case for residents of River Gee County.

Twenty-one Liberians, most of whom are medical personnel in the county health system, have been trained by Samaritan’s Purse to provide support to disease-stricken individuals at the center.

“They have been trained to dress in personal protective equipment and go in and safely take care of Ebola patients,” wrote Judith Hoover, a nurse who will oversee the day-to-day operations of the center. “We will provide supportive measures, such as giving oral rehydration solution, medicine for pain and fevers, an antibiotic, and an antimalarial medication. Patients will be fed and cared for, without the family being put in danger.”

“They are cared for with dignity, respect, and love,” she wrote. “And supported spiritually through prayer and simply sharing the love of God.”Pray for an end to this Ebola outbreak and the softening of many hearts to the Gospel of Jesus Christ.