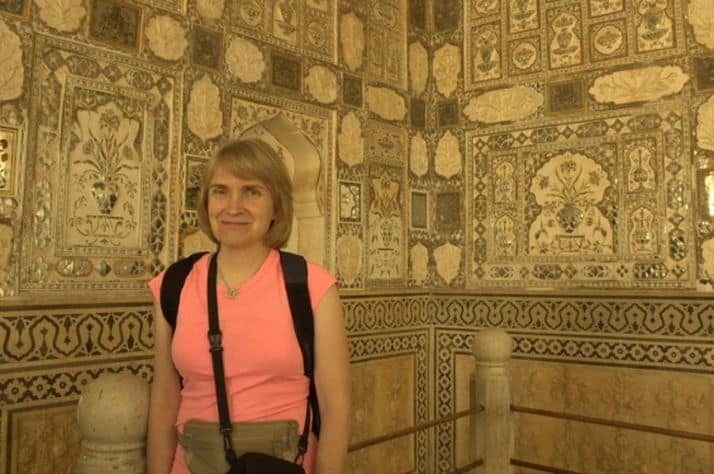 “I want to be where the Lord is, so I go where the broken hearted are and I love them and care for them.”

Even before Dr. Dawnelle Topstad touched down in northern Italy on April 9, the reality of COVID-19 went from her head to her heart.

The 16-year-old boy sitting next to her on the flight to Frankfurt at first looked like any young person engrossed in a video game on his phone.

Eventually, however, the teen revealed that he was flying home to Germany from his high school exchange program to attend the funeral of his father, who had just died from COVID-19.

“That really struck me,” said Topstad, a general surgeon in Calgary, who does a lot of medical contract work in Canada’s north.

“In your head you recognize that thousands of people had died from this virus but until it affects someone you know or someone that you’re in direct contact with, often it’s hard to have that knowledge be felt by your heart,” said Topstad.

“That was my first reality check that this is a significant pandemic. There was a kind of a solemn feeling around you on the plane — a sense of seriousness,” she said.

Her next reality check came after landing in Milan, when the two cars that came to drive her and two other medical volunteers from North America the 75 kilometres to Cremona received a police escort because the entire country had been shut down and travel was being curtailed. 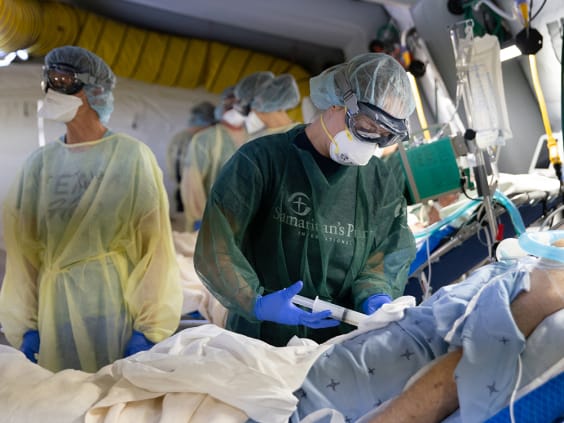 Medical staff attend to a COVID-19 patient at the Samaritan’s Purse Emergency Field Hospital in Cremona, Italy, in March.

For the next month, Topstad worked 12-hour shifts volunteering her expertise at the Samaritan’s Purse field hospital in Cremona. At that time, Italy was the eye of the coronavirus storm. That tragic title has now been claimed by the U.S. with almost 92,000 deaths. By contrast, Canada has suffered 5,912 deaths.

Unlike other medical missions she has volunteered for with Samaritan’s Purse and Academics without Borders, this was Topstad’s first pandemic and her first deployment in a developed country.

“Normally, our medical missions are in developing countries and our accommodations are very challenging, but somebody from the Lombardy region of Italy paid to put all of us up in a hotel and he hired a top chef so our food was incredible,” she said. “This was not a weight-loss deployment, that’s for sure,” she said with a laugh.

According to Samaritan’s Purse, Arvedi Steel Group paid for the accommodations and food for the more than 70 staff and volunteers at the Hotel Continental in Cremona’s main square, and would also send additional gifts of food and treats to the hotel and field hospital.

“The Arvedi Steel Group was also instrumental in arranging other gifts-in-kind for things that we needed with another supplier for perimeter fencing and sanitation, like porta-potties, water services and lumber materials,” said Frank King, saying the donation amounted to more than C$750,000.

Topstad says the field hospital was inundated with shows of love by the locals. “The Italian people were very appreciative and generous in every way possible, including many, many notes of gratitude,” said Topstad. “It was all very moving and uplifting.”

Recently, the mayor of Cremona declared all people involved with the group’s field hospital as honorary citizens of the city and, because it is the birthplace of Antonio Stradivarius, everyone was given mini violins as keepsakes.

Savannah Koop, a registered nurse at Calgary’s Rockyview Hospital, says she was “blown away by the gratitude we were shown.”

Oddly, however, she says she’s the one who feels grateful. 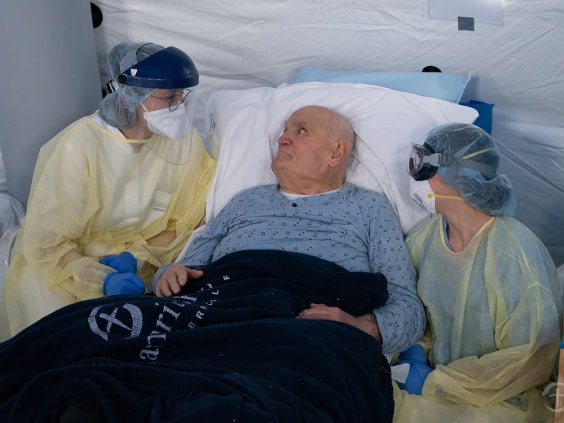 “It was such an incredible experience,” says Koop, 26, who travelled to Italy with her friend and registered nurse colleague, Alyssa Collier.

Koop says she fully anticipated she would contract the virus.

“But SP has so much experience with communicable diseases like ebola I never did, and because it’s a Christian organization the whole place was infused with prayer and love, so it was a very powerful, positive experience, even though some patients sadly died.”

Both Topstad and Koop said they were stirred by how the patients in each tent of 14 formed their own supportive communities. Topstad said at one time about half of the women in one tent had lost their husbands to COVID-19 as they battled the disease.

“They became lifelong friends, that’s for sure, and it was really lovely to see,” said Topstad.

Koop says she saw the same thing in the men’s tent. When someone would be discharged — and there was always much cheering and clapping when that happened — the discharged person would call the next day to check on their former ward mates.

“It was really beautiful. There was so much camaraderie. Family isn’t allowed, so they formed their own family in that tent,” said Koop.

Now that Koop has finished her 14 days of quarantine in Calgary, where she was not able to leave her home for any reason, she’s back at work caring for COVID patients at the Rockyview Hospital.

“People who are sick in hospital with COVID must go through that without their family, so what I learned in Cremona is it’s more important now than ever to take that extra time at the bedside, to listen for that extra 15 minutes even though sometimes it feels like you don’t have that 15 minutes, I think that’s the most important thing,” added Koop. That, and helping elderly patients learn how to use FaceTime on their phones.

Koop says while she sometimes is fearful of the disease, she focuses on the Bible verse from Psalm 34:18, that says: “The Lord is close to the broken hearted. . . .”

“I want to be where the Lord is, so I go where the broken hearted are and I love them and care for them,” she said. “It’s a great place to be.”

Licia Corbella is a Postmedia columnist in Calgary.