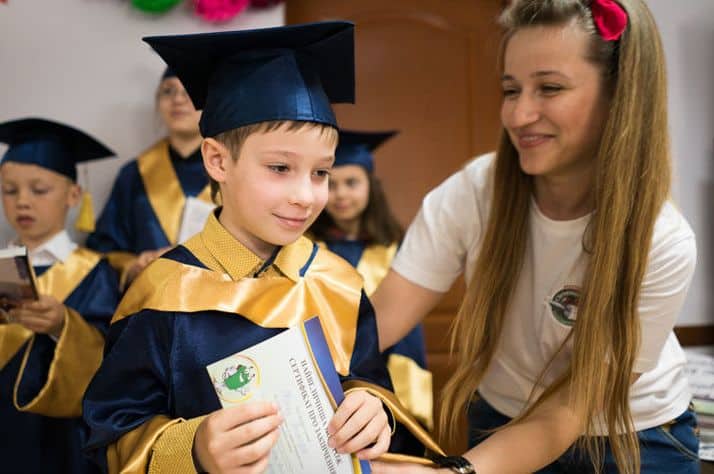 A small purple comb made a big impression on a young girl in Ukraine. She eventually became a believer and now shares her faith with other Operation Christmas Child shoebox recipients as a teacher of The Greatest Journey discipleship course.

Note: For five years we have had the special opportunity to send Operation Christmas Child shoebox gifts from Canada to children in Ukraine. We began this effort in 2014 to respond to the conflict that broke out in the country that year.

It has been a blessing for Operation Christmas Child Canada to be a part of this work in Ukraine. Ukraine will continue to receive shoebox gifts from the United States, but shoeboxes collected in Canada will no longer be sent to Ukraine. This will allow us, as Operation Christmas Child Canada, to continue to focus our efforts, and shoeboxes, in the regions entrusted to us—West Coast Africa and Central America.


Oksana Faik still cherishes the small purple comb she received two decades ago. The treasured item came to her as a young teen, when her sister Hristina brought home a brightly wrapped Operation Christmas Child shoebox gift and shared it with her family. 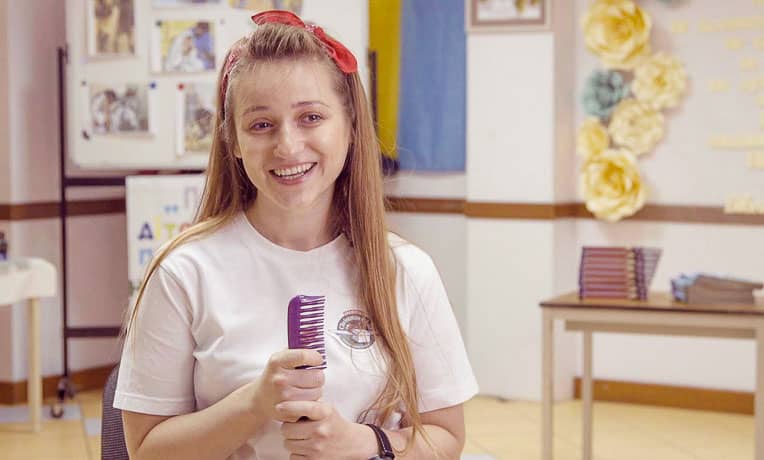 They were living in Horodok, Ukraine, in the late 1990s, just a handful of years after the former Soviet republic became an independent nation. Times were hard for Ukraine then, but for Oksana, the purple comb changed everything. Sent to her by people far away, it made her feel special and important. If she misplaced it, she would search tirelessly until she found it.

Later, while studying at a local university, Oksana came to Christ. She soon became involved in children’s ministry and wrestled with how to best communicate God’s love to the boys and girls she served. While praying about it, she remembered her purple comb. As in her childhood, she ran to find it.

“I took the comb and began to thank God for the person He told to pack this present that, by God’s will, came to me,” she said.

Looking back, she realized God had used the shoebox gift—and the unconditional love it represented—to soften her heart to later receive Him. Her comb now gave her added insight into her ministry to young souls.

“In small things, children can see something very big. That’s why they are important to God.”

The Greatest Journey: A Breath of Fresh Air

Today, Oksana is in her fifth year of teaching The Greatest Journey to kids in Chervonograd, Ukraine. This discipleship course is designed to teach Operation Christmas Child shoebox recipients how to faithfully follow Christ and share Him with others. Oksana is humbled that her long-ago-received gift is connected to her current ministry. 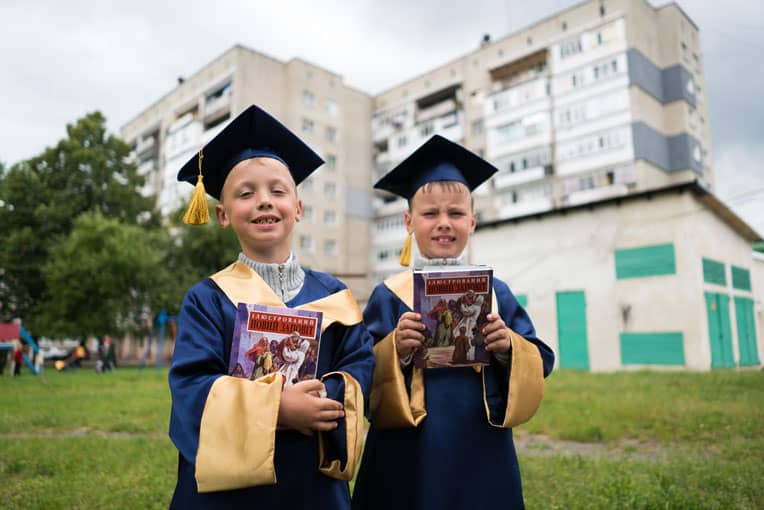 Twins Vladik (left) and Vitaly received Bibles at graduation to help them grow in the Lord and continue sharing Him with others.

“The Greatest Journey is amazing for children. Because of the lessons, they have an opportunity to meet God and have a relationship with Him,” Oksana said.

As she graduated more than 20 students this past summer, her joy radiated. Together with another teacher, she led singing, games, and a memory verse review with boys and girls proudly wearing their blue caps and gowns with gold tassels and stoles. Each child then came forward to receive their own New Testament in their language and a graduation certificate.

Nadia Vovkovych, one of the mothers beaming in the crowd, is glad that her 8-year-old twin boys, Vitaly and Vladik, had the opportunity to learn about the Bible. In fact, they both received Jesus Christ as Lord and Savior during the course.

Nadia tried reading the Old Testament before the boys were born, but she found it very difficult. Now, however, her twins faithfully shared the Bible stories they learned in class with their mother.

Oksana tells of other students in the class doing the same thing as well: “They become little teachers for their friends and their parents.”

Children’s ministry was not always this accessible in Ukraine. Oksana’s pastor, Mykolo Gayduchyk, explains that when he was young “Christians who wanted to tell children about God had to hide in basements. The government said parents could go to church but they could not take their children.”

Now he leads The Grace Church, made up of 48 families, and is delighted to host The Greatest Journey. “When we started this program, it was like a breath of fresh air for our church…It was a push forward for us to go outside our comfort zones to witness to others.”

A Legacy of Influence

Offered in more than 100 countries, The Greatest Journey is being used by God to change lives around the world. Since the program was launched in 2009, nearly 15 million children have been enrolled with 10.6 million graduated. There have been 6.9 million reported decisions for Christ. Over 700,000 teachers have been trained to serve as leaders and mentors.

“They become little teachers for their friends and their parents.”

In the Ukraine alone, 9.2 million Operation Christmas Child shoebox gifts have been distributed since 1996 and more than 280,000 children have participated in The Greatest Journey since it started there in 2011.

Samaritan’s Purse has influenced Ukraine in multiple ways, according to Operation Christmas Child national coordinator Sergiy Kachan. In addition to impacting the lives of the children who receive a shoebox gift and participate in The Greatest Journey, the project is helping to unify the churches.

“Evangelical churches in Ukraine are divided,” Sergiy said. But early in Operation Christmas Child’s time in this country, the program brought various churches together. According to Sergiy, “It was the only organization that could gather Pentecostals and Baptists in the same building.”

Also, the first shoebox distributions in Ukraine took place at schools and orphanages which gave the government a positive view of churches.

“Ukrainian people are very secular and liberal, while the church is seen as a marginal part of society,” Sergiy said. “The long-term ministry the churches have in society helps people see that churches are useful to society.”

Pray that God would continue to bless the worldwide ministry of Operation Christmas Child and The Greatest Journey, thereby drawing boys and girls, families, and whole communities to Himself.