Zoe Winn, 12, has filled hundreds of shoeboxes with gifts to be distributed by Samaritan's Purse 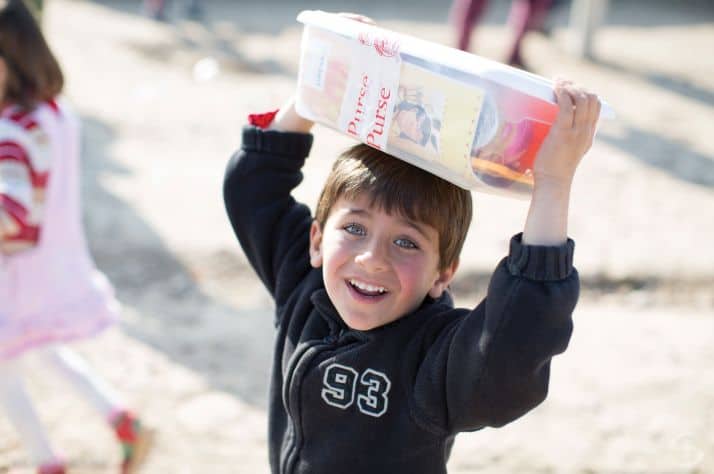 Pre-teen Albertan sends hundreds of gift-filled shoeboxes around the world.

The 12-year-old began filling shoeboxes with personal essentials and toys when she was aged five and the activity has only snowballed and become a hobby since then.

“Maybe for the past three years, I’ve been doing multiples,” said Winn, a Grade 7 student at Heritage Christian Academy.

This fall, a year after she filled 70 of the containers, she has packed 100 shoe boxes for distribution by charity Samaritan’s Purse in war-torn Ukraine and other places.

Her mom Gina said the activity’s long been second nature for her daughter.

“This has definitely been her heart and soul all her life-she bugged me in Grade 1 to pack shoeboxes,” she said.

“She lives to help people any way she can.”

Zoe’s mobilized a network of donors to fill those boxes-dentists for toothbrushes, other businesses for cash, bottle recycling and even her own birthday party where she has asked for charitable donations instead of gifts for herself.

She has even sold crayons to help others.

Much of that motivation has come from putting into perspective a life of relative southern Alberta affluence-and seeing a world of need at the same time.

“Kids here complain about having the extra things they don’t need,” said the younger Winn whose basement has been taken over by shoeboxes.

“Kids overseas don’t have hygiene items, or things they need for school.”

She has employed the help of fellow students to collect school supplies and stuffies and discovered the ideal kind of soap to send those in developing countries.

“If they have to bathe in a river, Ivory soap floats,” she said.

The Samaritan’s Purse program is only one avenue Winn takes in her generosity.

She has collected items for Stephen’s Backpacks in Airdrie to help under-privileged kids and she has raised money for an orphanage in Cambodia.

“She has the biggest heart of anyone I know,” said her mom.