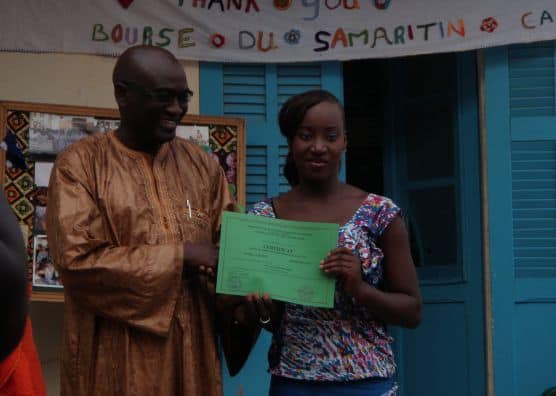 Samaritan's Purse is funding a Christian vocational training center for girls in Senegal.

June, 2014—Girls don’t need to go to school; they get married, have children, and look after the family. That’s the dominant thinking in rural Senegal, an impoverished nation in West Africa. It keeps young women like Oulley (pictured right, above) from ever having the chance to learn if God has other plans for them.

But in Senegal, Samaritan’s Purse uses your donations to support a Christian vocational training center for girls.

Oulley, who was staying at home and helping with chores, found out about the church-run center and wanted to learn how to read and write. She feared her father would try to stop her.

To her amazement, although her father was surprised, he didn’t oppose her request. So Oulley went to the center, enrolled in a three-year government-approved program, and learned basic literacy and math skills, plus the ability to sew. That has opened the door for her to find a job or start her own business.

Even more important, Oulley and other girls in the Samaritan’s Purse-funded program received Christ-like love from the staff, who include Biblical training in all their instruction.

When students at the training center complete their studies, they demonstrate their new skills during graduation ceremonies. Because she finished at the top of her class, Oulley was picked to speak on behalf of her class.

Her parents were nervous as Oulley unfolded the piece of paper on which she wrote her speech. Three years before, she could not have written or read anything.

On that day, tears flowed as she read slowly, but with assurance. When she finished, the audience cheered and clapped. Colorfully dressed women flocked around the young woman, engaging in traditional dances.

The success of Oulley and other young Senegalese women at the center has helped change perceptions, and demonstrated that an educated girl can greatly contribute to the development of her community and country. And it’s all possible because of Canadians like you.

Through your continued prayers and support of Samaritan’s Purse projects like this, God will work through us to equip the next generation and change lives now and for eternity.