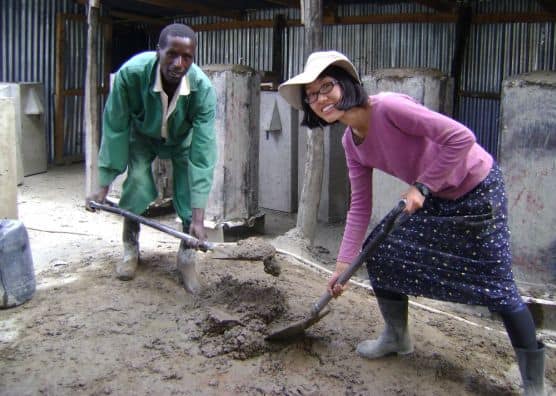 Home now after seven months in Kenya installing filters to provide people with clean water, Ying Mao loved the sense of community among the villagers she stayed with.

“One thing about Kenya is people really reach out to others and the concept of time is very different,” said Mao, who lives in the area of Eglinton Avenue and Jane Street.

Unlike the hurriedness of Toronto, Kenyans visit each other daily and everything is more communal.

“People are still focused when they do their work but relationships are more important than getting things done,” said Mao, who was in Kenya from the end of last June until the end of January.

“I remember sharing that we don’t necessarily know our neighbours (in Toronto) and that was a huge shock.”

Mao was in Kenya as part of a development partnership between the federal government’s Department of Foreign Affairs, Trade and Development Canada (DFATD), formerly CIDA (Canadian International Development Agency), and Samaritan’s Purse.

Samaritan’s Purse is a nondenominational evangelical Christian organization that provides humanitarian aid to people around the world regardless of religion, race, gender or income level.

Government funding didn’t cover any of the faith-related aspects of the trip.

“I always had a passion to know more about the world,” she said.

“(Also), I studied international development. It made sense to get field experience and see what Canada is doing on the ground.”

Mao was one of 16 interns sent to work on different global projects.

She and three other women went to Kenya to install BioSand Water Filters, a Canadian invention that removes contaminants from drinking water.

This was not the first time Mao had been to Kenya.

She had been in the country in 2009 as a volunteer with Global Youth Volunteer Network, working with non-government organizations on different projects.

“I had some attachment to Kenya and was open to going back,” she said.

The first, Siongiroi, is a semi-arid, more rural community.

Because access to water can be difficult, many people drink water directly from the river or consume rain water, both of which are not sanitary supplies, she said.

Some people boil their water but that uses a limited supply of available firewood, she said.

The second village, Kericho, where it rains almost daily, is at a higher elevation.

While there is piped water, the supply is not clean, Mao said.

“Whatever comes out of the tap is brown,” she said.

Helping to provide people with clean water was fulfilling, she said.

Just as fulfilling were the relationships she forged with people in the communities, Mao said.

“Since I lived with locals, I got to see all of the challenges and successes in their community from their point of view,” she said.

“It opened my eyes to seeing the world, people’s hopes and dreams.”

Mao became interested in humanitarian work through her faith.

Describing her family as not religious, she became a Christian through a friend and is a member of Grace Chinese Gospel Church near Victoria Park and McNicoll Avenue.

Mao came to Canada at the age of four with her father and mother, Jiale Mao and Ping Dong, and her grandmother, Luping Yang.

An only child, Mao faced cultural pressure to pursue a high-paying professional career but said her outlook changed after she found her faith.

“I had a whole path for my life set out before I became a Christian,” she said.

“But at some point, I realized I was not living my life for my parents.”

While her parents were reluctant to let her go to Kenya the first time she went, this time they sent her “with open arms,” Mao said.

She envisions herself doing more humanitarian work in the future.

“I’m really open to that. I’m trying to figure out where to go next,” she said.

“Through this experience, (I realize) I have a passion for working with women, either locally or globally.”

Where Most Needed - 012000
$
Donate
Top Stories
“Hunger Will Kill Us”
Refuge for the hungry in Cambodia
Nurses treasure time with Samaritan’s Purse, helping Italian COVID-19 patients
Shoebox Gifts Go Even Where There Is No Road
Celebrating 50 Year's of God's Faithfulness