We are helping in the aftermath of Cyclone Pam 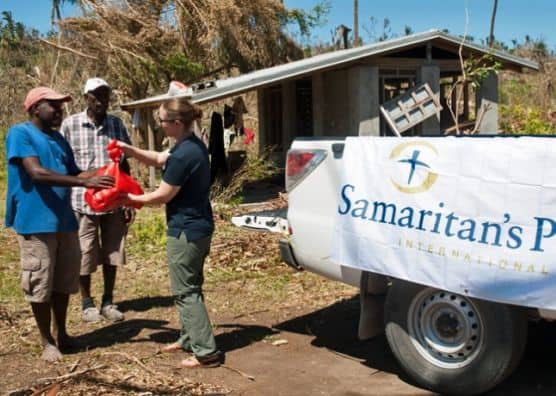 See the latest updates as Samaritan's Purse brings relief after the terrible storm that wreaked havoc across the nation of Vanuatu.

For the first time since Cyclone Pam devastated their island, the people of Tanna are seeing hope. Samaritan’s Purse teams have come here in the Name of Christ, bringing emergency relief supplies to people who lost their homes in the catastrophic storm.

Tanna is one of the largest islands of Vanuatu, the South Pacific archipelago devastated by the massive storm. This is where a Samaritan’s Purse team of disaster response experts and medical personnel is working to bring relief to victims of the cyclone.

We have reached more than 3,200 households with tarps for shelter, hygiene kits, cooking supplies, blankets, mosquito netting, and jerry cans. We are now transitioning from supplying household items to distributing food provided by the government of Vanuatu. We plan to distribute more than 1,100 tons of food over the next three months.

Tarps from Samaritan’s Purse provide shelters for families who lost everything in Cyclone Pam.

Our medical teams have seen more than 1,200 patients and have now left the island. We were based at Lenakel Hospital in West Tanna. We’re also covering the birthing center/maternal child health center with tarpaulin and are installing a chlorinator.

Our mobile medical team reached this destroyed village in north Tanna, where they treated people injured during Cyclone Pam.

We have also begun to work on Aneityum, the southernmost island of Vanuatu. Our team recently delivered aid to all of the more than 250 households on the small island.

The supplies being distributed are part of a shipment of some 70 tons of materials Samaritan’s Purse sent to Vanuatu to meet the immediate needs of storm victims. We expect to provide emergency relief to some 50,000 storm victims during our response.

Tanna, an island in the Tafea Province, was directly in the path of Cyclone Pam and suffered extensive damage.

“It was monstrous,” said Nelson Niras, a 60-year-old Tanna resident.

Most people here lost their homes and their crops, which were their main source of food and livelihood.

“Cyclones always pass through this island. Many  have already come and gone. But this is the worst that has hit this island,” said Pastor Jonathan Moses, who prayed over one of our distributions on Tanna.

But as Samaritan’s Purse gives out tarps are other supplies, smiles are seen and laughter is heard.

“This is the first time we are receiving help,” said Eva Shem, a mother of three.

The supplies not only meet immediate needs, but also are  a reminder that help has arrived and they  have not been  forgotten. Our teams work in the name of Jesus, ministering to those who are suffering and reaching out with care and compassion.

“I feel downhearted because many of my good things are destroyed, damaged,” said Ellen Wap, whose home was destroyed. “Only God, I give all my trust to Him—that help will come somehow. Then I saw the help already coming and I thank God for this.”

Sorrowful Yet Rejoicing: Believers display strength in Christ despite losing everything to Cyclone Pam

Cyclone Pam hammered the island chain in the South Pacific with winds up to 300 km/h and torrential rain, killing at least 11 people, destroying houses, and causing widespread destruction.

Our team arrived in Port Vila, the capital of the impoverished nation, in the immediate aftermath of the storm.

“What we’re seeing is what you’d see after a major disaster,” said Patrick Seger, leader of the response. “Food crops have been destroyed, fruit trees have been stripped off, pigs and chickens were swept away. They’re saying people will be without food for months.”

The category 5 storm—the strongest to reach landfall since Typhoon Haiyan devastated the Philippines in 2013—made landfall at about 11 p.m. local time on March 13 and thrashed the islands of Vanuatu for most of a 24-hour period.

“[There’s] devastation as far as the eye can see,” a Samaritan’s Purse ministry partner in Vanuatu said.

In Port Vila, up to 90 percent of the houses were destroyed; trees and power lines were downed, and people were wandering the streets looking for help. There are reports of entire villages in remote areas being destroyed.

Vanuatu has a population of 267,000. Located about a quarter of the way from Australia to Hawaii,   it is spread over 65 islands. About 47,000 people live in Port Vila.

“This is a very devastating cyclone,” Vanuatu President Baldwin Lonsdale told news outlets.  “It’s a setback for the government and for the people of Vanuatu. All the development that has taken place has been wiped out.”

Please join us in praying for the people of Vanuatu. Pray that God will bring hope and healing in the wake of the storm.