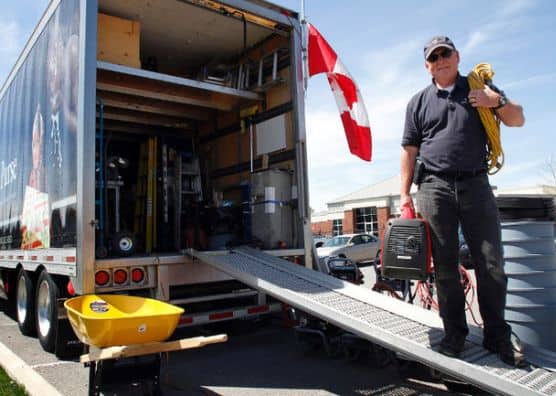 Samaritan's Purse emergency and disaster response team is in Belleville, Ontario, and responding to the flooding in the area.

Written by Jerome Lessard
Published by Community Press on Monday, May 5, 2014

BELLEVILLE—From volunteers ready to lend a hand, to residents affected by flood in needs of assistance, a flow of calls has started coming Samaritan’s Purse’s way since the charity specialized in disaster relief rolled into town Friday.

Since then, Steve Elliott, regional representative with the non-profit and non-denominational Christian organization and Brent Davis, emergency and disaster response manager, saw about 45 people sign up to help for a day or more following a public announcement at Maranatha Christian Reformed Church, where the charity set up its mobile headquarters.

He noted volunteers being recruited early this week are to start teaming up with Samaritan’s Purse staff and will be split into work crews of six to prepare local homes for repairs, starting Wednesday. Work will take place between 8:30 a.m. and 5 p.m. daily, except Sundays.

“We will be calling those individuals over the next couple of days to gauge when they will available to give some of their time for this relief effort,” he said, while running final checks on needed generators, power washers and electrical cords outside a transport trailer, which serves as the team’s HQ, Monday afternoon.

“If it’s anything like other past recovery operations we’ve been involved with, it’ll probably be pretty busy over the weekend,” he said.

In addition to recruiting volunteers, Elliott, Davis and their staff have begun, as ordered by the organization’s national headquarters in Calgary, assessing damage in the Foxboro area Monday morning. They plan to visit Tweed later this week.

The relief charity anticipates being here for at least three weeks or, Elliott added, as long as there’s work and volunteers to co-ordinate.

“We are up in the Foxboro area today (Monday) where we stop at homes that have been impacted and hopefully we will find someone home. If not we have a door hanger that we leave on the door knob with information on what we’re doing and how they can contact us,” he said.

Prior to volunteers arriving to the area along Ashley Street and Harmony Road in Foxboro, Samaritan’s Purse had to assign priority to the most vulnerable: seniors, single parents, people with disabilities, and those with low incomes.

“Depending on the progress and how quickly we move, and if we’re giving the luxury of having a lot of volunteers, we’ll be able to send crews at both municipalities at the same time, which has happened in the past,” he added.

At the peak of an average recovery operation, Samaritan’s Purse has enough gear on location to run four teams of six. Given “enough” volunteers answer the charity’s call for assistance, two more teams could be added to the relief lineup.

“We’ve had some residents affected by flood who called here and our assessment team in Foxboro has met with some as well, but it’s a work day so we suspect that when people arrive back and see the door hangar the calls will start coming back in,” he said.

To register as a volunteer or request a home assessment, call the local command centre at 613-210-0792. The line is now staffed, but the charity has set up a voicemail.