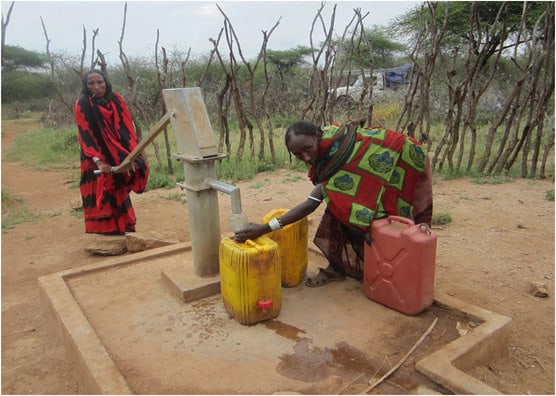 A village in Ethiopia, Africa is being transformed by a Samaritan’s Purse water and hygiene project.

April, 20113—Ato looks after his rural African community’s new well. But it hasn’t always been that way.

“The village’s women and children used to walk seven kilometers to collect water,” he remembered. “They had to spend the majority of their day collecting.”

Ato lives in the southern region of Ethiopia, where five million people are suffering from a water shortage.

A couple from his community told us their story. Taki and her husband Belalo were among the countless devastated by the drought.

Without rain, the couple’s crop of corn and beans dried up, and they (with their six children) had to move their livestock 20 kilometers away. The move and their crop’s failure reduced the family’s diet to bare subsistence.

Even after the move, Taki and her children had to walk 12 kilometers roundtrip to collect water. A contaminated pond was the only water source they could find and it wasn’t long before the family became sick from waterborne diseases. The children developed back problems from carrying heavy jerry cans day after day.

That’s why Samaritan’s Purse began a Water, Sanitation, and Hygiene (WASH) program in this drought-devastated region of Ethiopia and drilled a well right in At-  Taki, and Belalo’s community.

Because of your prayers and financial support, their lives and the lives of thousands more are being transformed by the construction of 11 accessible wells, several of which have yet to be drilled. These water points will not only address the immediate water crisis, but also the long-term need for clean drinking water. While drought is inevitable in this region, inaccessible and disease-ridden water is not.

A simple gift of water makes a big impact

Remember Ato, the community’s well caretaker? He is grateful for the water pump. The clean water affects many people, he said, but women most of all. With a new well, women and children living in the community don’t have to travel long distances to collect water.

“The hand pump allows women to have more time for other activities,” he said. “And they don’t suffer from back problems and heat exhaustion.”

The success of our WASH program in rural Ethiopia is only possible because of the generosity of Canadians. Because we are working in partnership with the local church, your prayerful and financial support is making Christ and His love for those in need known in this African region.

But with five million still suffering, there is more to be done. Please partner with us, so that Ethiopia might know the One who said: “Everyone who drinks this water will be thirsty again, but whoever drinks the water I give them will never thirst” (John 4:13-14, NIV).