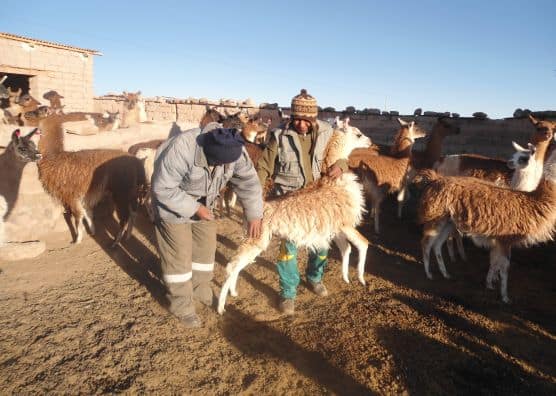 Rural Bolivia is home to more llamas than any other part of the world. The animals provide local farmers with transportation, wool, meat, and fertilizer. Their importance to the country’s economic, social, and cultural life means they are highly valued.

Since 2008, Samaritan’s Purse has been working with llama producers in a variety of ways in order to improve the overall health and livelihoods of families in the impoverished region. One goal has been to improve their access to veterinary medications. 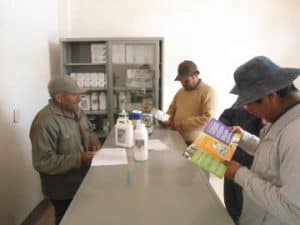 A small veterinary pharmacy was established for Bolivian llama farmers with the help of Samaritan’s Purse.

In these farmers’ communities, located three to four hours from the capital city of La Paz, there were no places to buy the medications they sometimes urgently require. For example, when an animal needed a parasite prevention medication, producers generally had to travel all the way to La Paz to buy it. In many cases, the animal died before the medication could be administered.

With the encouragement and support of Samaritan’s Purse, a small veterinary pharmacy was established in the area to provide local veterinarians-also trained by Samaritan’s Purse-with timely access to the medications they require.

The opening of the pharmacy lowered the mortality rate among sick animals. What’s more, eliminating the long journey to La Paz reduced the overall cost of the medications to the farmer.

The llama producers thank God and Samaritan’s Purse for opening the shop in the community. They feel blessed to have healthier animals than ever before.

“Before, when my animals would get sick, several would die because it took so long to go to the city and buy the medications,” said Mr. Julio, a direct beneficiary of the store. “Now, whenever there is something wrong with them, I immediately go to the shop and buy what I need to heal them. This year, not as many have died compared to last year.”