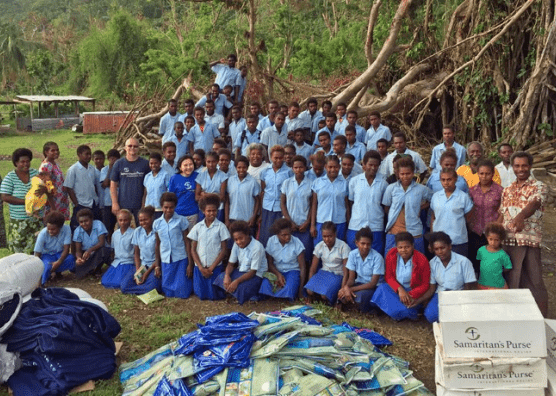 It was sprinkling rain and the sound of the ocean pounding against the shore could be heard as students gathered under a massive banyan tree at Kwataparen Secondary School on Tanna island. Excitement buzzed in the air on the campus that had been nearly empty just a week before.

As Cyclone Pam approached the islands of Vanuatu in March, the boarding students were sent home to their parents or guardians. Located right by the sea, the school was not a safe place to ride out the storm—which proved to be worse than any disaster the people had lived through. 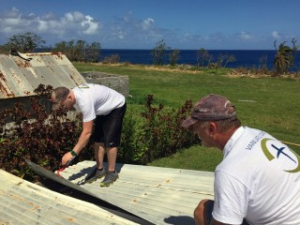 The school`s proximity to the ocean made it susceptible to Cyclone Pam`s strong winds.

The category-5 cyclone took down thousands of homes, churches, and schools across the country`s 60-plus inhabited islands. The residents of Tanna experienced its strength full-force.

Once the storm had passed, the teachers at Kwataparen returned to the school. What they found was truly devastating.

Roofs had been peeled back or blown away on several buildings, including the boys` dormitory. Others, including the chapel, were completely destroyed. Books and supplies were ruined. All of the plants—even the root vegetables—on the farm where the students learn how to keep a garden were gone too.

With so many needs, the leadership had no idea when students would be able to return. The school operates with some government assistance, but it is largely self-reliant.

The storm proved to be worse than any disaster the people had lived through.

Providing a Safe Place To Learn

As part of the Samaritan`s Purse emergency response following Cyclone Pam, we sent out a team to assess schools and assist with repairs. After surveying the campus of Kwataparen, we returned with a team to repair the roof on the boys` dormitory as well as several other buildings.

It was then that our staff met Cindy, the wife of the vice principal and one of the teachers at the school. A Christian, she shared about her renewed sense of purpose in resuming classes.

“I love to tell about Jesus more now than before,” she said. “Students need to know Jesus. Before the cyclone we were so focused on academics, but I think now we need to be more focused on the spiritual. As a teacher I want to share with them more about the Bible and Jesus and pray with them more.”

Just a month after the storm, Samaritan`s Purse staff stood with Judy and the other teachers at the celebration welcoming the students back to school. The boys and girls sang songs, and the principal gave a speech.

Our team was invited to speak, and staff members explained the story of the Good Samaritan in Luke 10. We told the people that Samaritan`s Purse came to bring help in the Name of Jesus and through His love.

John Soqeta, a local minister who worked with us during the response, also shared a message of encouragement and prayed for the students and teachers.

In addition to celebrating with the school, our team provided blankets, mosquito nets, and hygiene kits for  every student returning to class.

“It`s very encouraging to see that there is someone thinking of us,” Cindy said. “We can feel the strength of people praying.”

The light rain did not put a damper on the occasion as everyone shared in the excitement of renewed hope and God`s faithfulness in provision for Kwataparen school.

This month, Samaritan`s Purse is wrapping up our Cyclone Pam response in Vanuatu. We have assisted more than 40 schools, completing repairs on over 100 buildings, so that children can have a safe place to learn. We have also provided thousands of storm victims with emergency relief supplies and medical care, helped distribute food, and repaired church buildings.