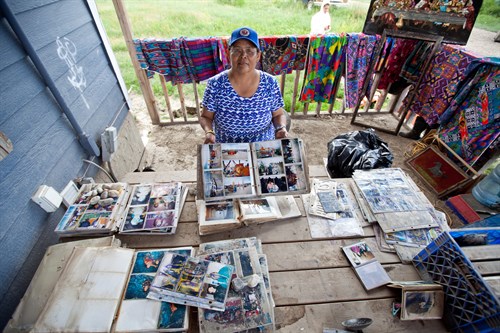 A staff member shares her experience helping a Siksika Nation family recover treasured items from their home that was damaged in the 2013 southern Alberta floods.

I had the honor of serving a Siksika Nation family whose home was flooded by the Bow River. Our Samaritan’s Purse volunteer group mudded out the basement of this family of 11, salvaging their treasured possessions when possible and listening to stories of their family history.

The mother, Melvina, was originally a police sergeant from the Navajo and came to Canada after meeting her Siksika husband. She had a strong spirit and dynamic stories.

Melvina rejoiced at how copies of more than 30,000 photos were saved from the murky flood waters. She smiled as she pulled up a portrait from her father’s military days. A Navajo wind talker, he used his native language as an unbreakable military code for the United States during World War II.

We listened to Melvina share stories about her roots as we hung her beautiful Navajo fabrics up to dry in the wind. As we pulled mud-drenched saddles from the debris, Melvina told me about her barrel racing days. The stories of her history and culture went on and on. She was a treasure in all of our hearts by lunchtime!

At the end of the day, each member of our Samaritan’s Purse volunteer team signed a Bible for Melvina. As she gave each of us a hug, she started to shake, covering her mouth as tears filled her eyes. The emotion of the day had caught up with her; she was overwhelmed that her family was the reason we had come. We came to give of ourselves on behalf of another in need, and to give her hope. Isaiah 58: 10 says true religion is this: “spend yourselves in behalf of the hungry and satisfy the needs of the oppressed” (NIV).

As I walked towards the bright yellow school bus to head home, I considered the events of the 2013 southern Alberta floods. I know that Christ is Hope and the restorer of all things; I know that He redeems and saves that which is lost. Through the grief and loss, He is redeeming things for Melvina and will continue to shine His love through all of us as we spend ourselves on behalf of those in need.