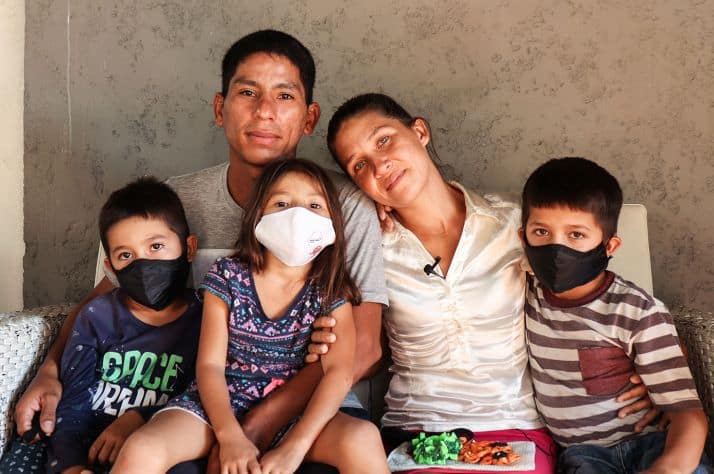 Venezuelan migrants are being forced to choose—face danger on the road or risk starvation at home.

Adriana knew she had to leave Venezuela when one of her sons was so weak from going without food that he didn’t have the energy to get out of bed.

He was so pale and motionless that she thought he might be dead. Then, he blinked but stared ahead with a glazed expression that sent her running to the neighbors for help. They gave Adriana what they had—some soup. But her son’s stomach was in knots from not eating for several days, and he couldn’t keep the soup down at first.

“I was so scared because I didn’t know if we were going to lose him,” Adriana said. “I said to the Lord, ‘My son can’t die, this can’t happen.’”

Before Venezuela’s economic crisis had intensified, Adriana feared fleeing to Colombia and enduring circumstances potentially more dire, as she doubted the family would even have a place to sleep at night. 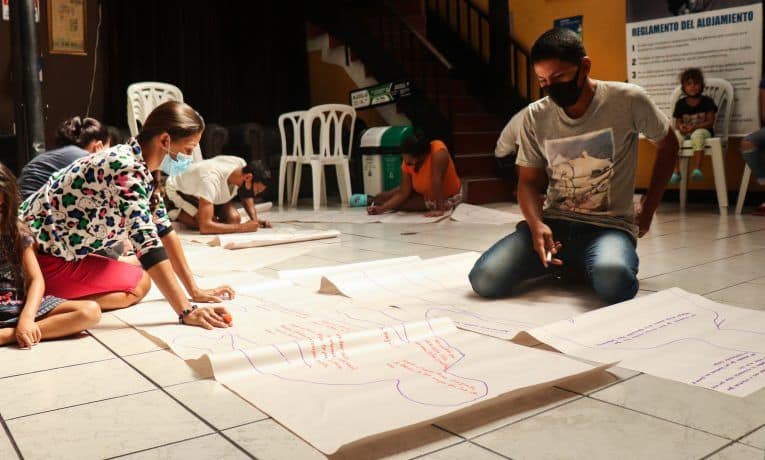 The family participates in an activity at our shelter to help them process their journey.

So, her husband, Anthony, decided to leave first, in search of work. He hoped to send enough money so that Adriana and their three children could remain in Venezuela.

He found a job in Colombia and sent them money, although, in Venezuela, it didn’t go far due to hyperinflation that caused prices to soar, making even the most basic items out of reach. Adriana often had to choose whether to buy a food item or a hygiene product because she couldn’t afford both. Her heart broke when she heard her children say, “Mom, I’m hungry” and saw them cry in discomfort and desolation.

Despite her fears about what dangers might lie ahead, Adriana decided to leave to pursue a better life for her children. Anthony returned home to accompany them, and the family set out together for Colombia. They still had to battle hunger pains, as well as nights sleeping on the streets and days when it seemed to Adriana like her swollen, bruised feet couldn’t go another step.

Already discouraged by the difficulties of the journey, she tried to not let added disheartenment crush her spirit. She remembers one instance when, after explaining the family’s plight, a person said: “That doesn’t matter to me.”

Yet, other times Adriana received much-needed encouragement, such as motorists who offered them a ride and prayed for safe travel.

“Sometimes when you’re walking and see people not helping, you feel discouraged, but other people’s faith can ignite yours,” Adriana said.

Adriana said that she learned to ask God to provide for every need.

Adriana learned to ask God to provide for her needs.

“Lord … I ask for you to give my kids something to eat,” she would pray. “Lord, strengthen my faith. And every step that I take, You will be there.”

When she saw a place on the journey where migrants could take shelter, she thought it was a mirage. But it was the Samaritan’s Purse migrant facility in La Donjuana, Colombia, outside the border city of Cúcuta.

“It was like an oasis in the middle of the desert, because we were able to sleep, shower, and eat,” Adriana said. “They provided us with health care, they gave us food, they gave us shelter, they treated us with respect and love.”

From tending to her battered feet to seeing that she got treatment for an infection that she had developed in another part of her body, the care she received made her certain that it came from the Lord.

“I know that God was with me.”

Besides our transit shelter facility in La Donjuana that helps nearly 900 people per week, our teams converted a hotel into an extended stay shelter in Bucaramanga in the Colombian Andes where over 200 people find shelter each month. There, we help migrants secure future places to stay, arrange transportation, and identify a spiritual support network of churches in their new location. We helped Adriana and her family transfer there.

In addition to our shelter facilities, we distribute food to families in need, offer prenatal health services to migrant women, and provide primary health services in rural Colombian communities through our mobile medical unit—all free of charge and all in Jesus’ Name.