The unsung heroes of the Ebola response 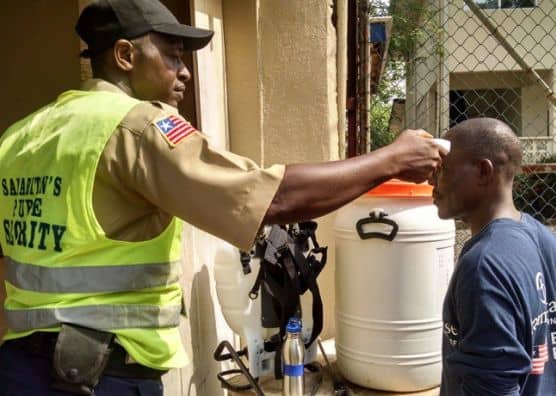 Meet the people who worked behind-the-scenes in Liberia during the deadly outbreak. Pictured above, Z. Belowen Yeke uses a thermal scanner to take the temperature of staff members before they enter the building.

When Ebola hit Liberia in 2014, Samaritan’s Purse was well positioned to respond through our office in the country. Our staff members taught awareness and prevention, and health care workers responded to the sick.

But many of the heroes of the response weren’t on the frontlines. They were behind the scenes, making sure operations ran smoothly for those who were treating sick people and helping in communities.

The Bible says that there are many members of Christ’s body, but each one is needed to do a specific purpose (1 Corinthians 12). Likewise, although all of our team members were not seen during the Ebola response, they were each needed to fulfill a role.

With the help of everyone, at the time this  is being written — March, 2015—Ebola is waning.

Meet six of the Samaritan’s Purse team members who contributed greatly behind the scenes. 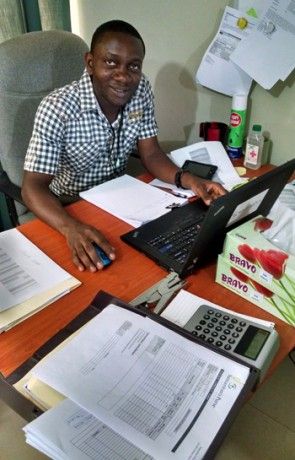 Alex Whenyou is the assistant finance manager. He lives in Monrovia and has been working with Samaritan’s Purse for two years. During the Ebola response, he and his team worked long hours, sometimes seven days a week, ensuring finances were correct so that activities in the field could happen.

Alex said some days he didn’t want to come into work because the office is located on a compound that houses one of the largest Ebola Treatment Units in the country. During the height of the epidemic, he had to pass through the gates and see people suffering. There wasn’t enough space for everyone who was sick.

When asked why he kept coming back to work, he said that he has a passion for his work and he wanted to ‘be part of history.’ Alex also said being part of the Samaritan’s Purse team helped him come in each day. He was greatly thankful that management ensured that all staff had access to safe transport. Samaritan’s Purse sent out vehicles to pick up some staff members so that they didn’t have to take public transportation, where there was potential exposure to Ebola.

Z. Belowen Yeke has been with the Samaritan’s Purse security team in Liberia for seven years. His income has allowed him to go to school and study agriculture. He would have graduated this past December, but the Ebola outbreak closed the school, and he was unable to finish.

Belowen takes pride in his work. Since the Ebola response began, his additional responsibilities have included taking the temperatures of staff members and visitors before they enter the office. This has ensured the safety of the staff members so that they can carry out their mission to fight the epidemic.

He asked that Samaritan’s Purse offices all over the world remember to pray for Liberia.

Hawa Kennedy always keeps a Bible on her desk. She has been the human resources manager for Samaritan’s Purse in Liberia for nearly seven years. When the Ebola response ramped up in October, Hawa had to run at full steam. She was pleased that the office was able to utilize the majority of staff members in the effort.

She worked tirelessly amending contracts in order to keep our work steady. She also had to rapidly recruit new health care workers in Monrovia.

She has relied on God during this time. No one in her immediate family was infected with Ebola, but her husband’s extended family lost eight members to the disease.

Emmanuel Peabody knew that Ebola was serious. Despite his fears, he came to work with Samaritan’s Purse during the beginning of the response. He started out working in the ELWA Hospital Ebola Treatment Unit. He said people were pouring in every day and there weren’t enough beds for everyone. It was difficult to see. Everyone was scared.

He’s thankful that no one in his family was infected. He attributes their health partially to a workshop conducted by Samaritan’s Purse to teach staff members about safety measures they could take in their daily lives. Now he ensures the safety of staff members and visitors at the office in Monrovia by spraying chlorine treated solution onto the bottom of their shoes before entering.

Emmanuel hopes that since he now has a job, he will be able to afford to go to school.

Esther F. George has been working with Samaritan’s Purse since 2010, most recently as a teacher in the church livelihood program. When her project was suspended because of the Ebola outbreak, she was placed on a team assembling Infection Prevention and Control kits to distribute to communities. The team packs the buckets with supplies, and distributes the kits.

They spend time teaching community members and following up to make sure they’re using the items properly.

She truly knows what it means to be a servant. In the midst of this work, she still takes time to see patients in the nearby hospital.

Norman Ciapha is one of many who say that working with Samaritan’s Purse has allowed him to sustain his family. He has been with our security team for three years. Before Ebola hit, he guarded the house where Dr. Kent Brantly lived. Although fear was high, he chose to stay at his post. He said the Brantly family was his family, and he continued to stay once Dr. Brantly tested positive for Ebola.

Please pray with us for our staff members who are working both on the frontlines and behind in the scenes in Liberia. Although Ebola cases are decreasing, the virus is still in the country. Please pray for safety, and pray for people living in the country as they work together to battle this outbreak.