The people of Vanuatu smile again 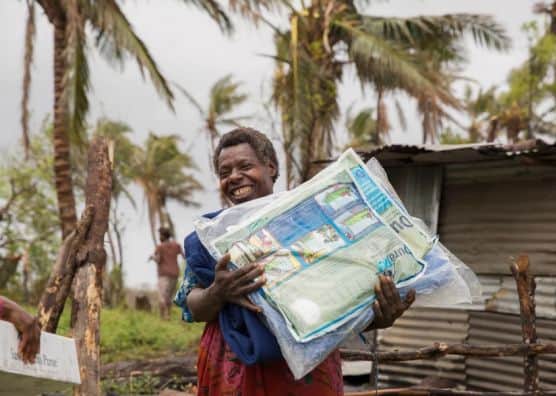 “We are happy people. When the cyclone stuck, we cried. But now we are happy. We are happy because you are helping us. God answered our prayers.” 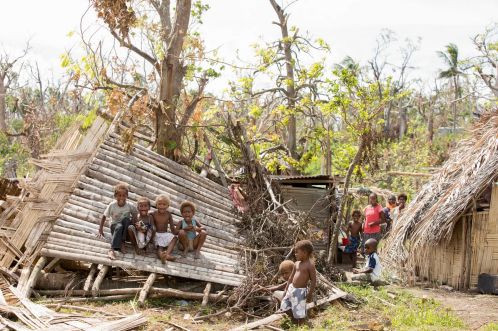 Sitting on a pile of debris from their home, these children sang “Go Tell It on the Mountain” at the top of their lungs.

Samaritan’s Purse responded within hours when Cyclone Pam wrought havoc on Vanuatu in March. We deployed jets, barges, boats, helicopters, and trucks full of emergency relief supplies. We hiked hours into the forests with medical care. We ministered to and worshipped alongside people in torn and tattered churches. Thousands of storm victims have already received help, and 30,000 more will receive food over the next several months.

Here is a glimpse into the hope your prayers and gifts have brought.

Vanuatu is an archipelago in the South Pacific. About 267,000 people are scattered throughout the country’s 65 inhabited islands. The coastline is rocky, the vegetation is lush, and the cuisine of choice is the flying fox (fruit bat). Most inhabitants live in rural villages as subsistence farmers and fishermen. Men take honor in looking after widows in their families. Women cook over fires in long, colorful dresses. Kids run around with slingshots, hoping to catch dinner.

It is not a wealthy nation, but it is known as one of the happiest.

Like other island nations, Vanuatu is vulnerable to major storms and its people accustomed to experiencing them. But Cyclone Pam proved to be a violent act of nature unlike anything they had seen before, devastating entire communities.

“The cyclone destroyed our house, our vegetable garden, and it destroyed our village,” Anna Willie, 19, said. Their roof  leaks badly now.  Anna has awakened soaked  and””¦with a wet mattress from rain during the night. They have to drag it out to dry in the sun.

The day after the storm, residents tried to restore what they’d lost. But the leaves they use to weave thatch roofs  had been  blown away, and the metal pieces used for roofs on concrete house were wrapped around trees. The storm had washed away gardens, broken water lines, killed animals and scattered belongings. The scale of destruction was massive.

Samaritan’s Purse deployed to Vanuatu immediately after the storm. We focused on Tanna, one of the hardest-hit islands, and supplied more than 3,200 households with tarps for shelter, hygiene kits, cooking supplies, blankets, mosquito nets and jerry cans. With assistance from the French military, we were also able to transport relief supplies to all 250 families on the small island of Aneityum. It was the first assistance most people had received.

“I’m very surprised to see help like this,” Pastor Jonathan Moses told our staff. This is something I”™ve said I cannot forget, and I believe people will never forget.”
After the cyclone destroyed their home, Tess Kales and her family were sleeping in a schoolroom. When we gave her a shelter kit and other supplies, she said they could return to their village. Today I am very glad because we have a tarp and other things to help me and my children,” she said.

After receiving their relief kits, the resilient Ni-Vanuatu immediately began reconstruction. Many families used salvaged storm debris such as tree limbs and intact sheet metal to fashion temporary shelters. They proudly displayed their Samaritan’s Purse tarps as their new roofs.

“This tarpaulin that my friends gave me will cover me and my family, and this will be our house,” said Robert Iatek as he climbed over the frame of his new home.

“This was once my house, but the disaster came by,” said Francis Korisa as he surveyed the scattered remains of his family’s home and belongings, gazing at scraps of metal roofing wrapped around a tree several hundred feet away. Two weeks after the cyclone, he had already finished a thatch house for his family, another for his mother and grandmother, and was working on a kitchen.

“The roofing is covered with the Samaritan’s Purse tarpaulin,” he said, “and it’s very, very helpful. Now my family is safe and dry, and I am happy, too.”

Our medical teams provided critical support at Lenakel Hospital—the only medical center on Tanna—treating the storm-inflicted wounds and sicknesses of some 1,800 patients . They also conducted mobile clinics in remote areas with little-to-no access to health care. Doctors and nurses made it a priority to pray for patients, and witnessed God’s healing power daily.

Nurse Zyra Abalos, a staff member who came from the Philippines to help, used her experience as a survivor of Typhoon Haiyan to minister to patients. “I want to share our story of how the Lord rebuilt our nation,” she said. “Seeing how the Lord rescued, restored, and rebuilt, I believe would be a great testimony for these people.”

Together for the gospel

In the aftermath of Cyclone Pam, Christians in Vanuatu gathered in damaged churches to celebrate Palm Sunday and Easter. Voices of the New Life Church congregation soared through large gaps in their damaged roof: “I’m going to lift up the name of Jesus. I’m going to lift up His wonderful name. I’m going tell of his power every day and every night.”

“We want to come alongside you and love you in the name of Jesus and tell you Jesus has not forgotten about you,” Edgar Straube, Samaritan’s Purse staff member, told the parishioners.

“Cyclones will come, whether physical or spiritual, but Jesus heals.”

Samaritan’s Purse is now transitioning from supplying household items to distributing food provided by the government of Vanuatu. We plan to distribute more than 1,100 tons of food over the next three months. Your continued prayer and support is needed as we help Cylcone Pam survivors recover and experience eternal hope in Christ.