Obeying the call of "The Good Samaritan" 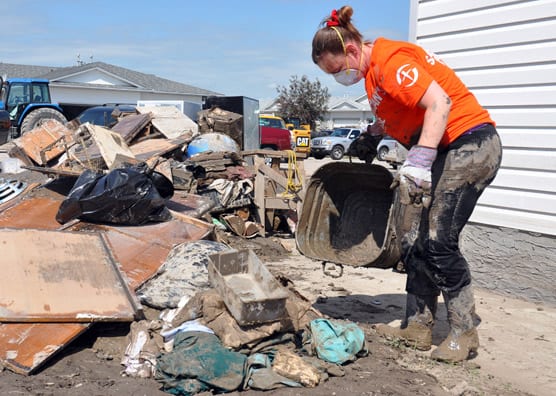 Why does Samaritan's Purse seek to help those in need?

August, 2013—When catastrophic flooding hit southern Alberta this summer, seven feet of water and sewage filled Candy and Jeff Neumann’s basement in High River. They were left without power, water or help from their insurance company, which rejected their claim for coverage.

“My husband and I were all by ourselves with no help and little hope,” Candy said.

Since June 21, Samaritan’s Purse has helped more than 660 homeowners who have shared stories of loss, grief, and shock similar to that of Candy and Jeff. And we have been honored and humbled to serve them with more than 4,500 daily volunteers and many local churches. From mudding out homes, to tearing out ruined drywall, to spraying disinfectant to prevent mould, we’ve prepared homes for rebuild across southern Alberta -all at no charge to the homeowners.

Some ask why we do it. Our motivation comes  from a story told by Jesus more than 2,000 years ago. It goes   like this:

A Jewish man travelling along a highway was attacked by a band of robbers and left to die along the side of the road. Several people passed by—individuals with the ability and resources to help—but they did nothing. The man lay there without a chance of survival until a traveller from the city of Samaria discovered him and stopped to help.

The Samaritan showed compassion. Seeing immediate needs, he met them: the Jewish man’s wounds were tended to, he was given a safe place to stay in a nearby town and the cost was covered.

The Good Samaritan did everything in his power to help. And we seek to do the same.

At Samaritan’s Purse, we believe wholeheartedly that Jesus Christ has given us—and many other Canadians—the  means to serve people in need. Since 1970, we’ve sought to help people around the world  through relief and development work  serving disaster victims, providing water, food, medical care, and education to impoverished families, and giving gift-filled shoeboxes to children in need.

In everything we do, we are serving as the hands and feet of Jesus. Our prayer is that one day, all will come to know Him—our loving and compassionate Savior who is the motivation for all we do.