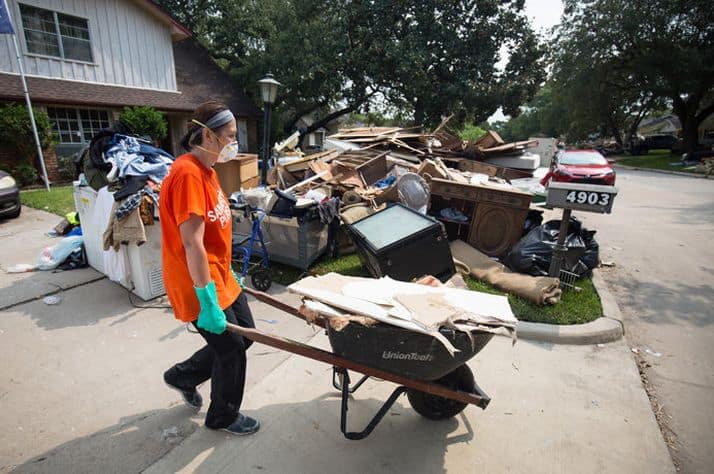 “I used to mow her yard and her yard,” Doug said and pointed at two brick houses across the street. “Now, I can’t even mow my own yard.” 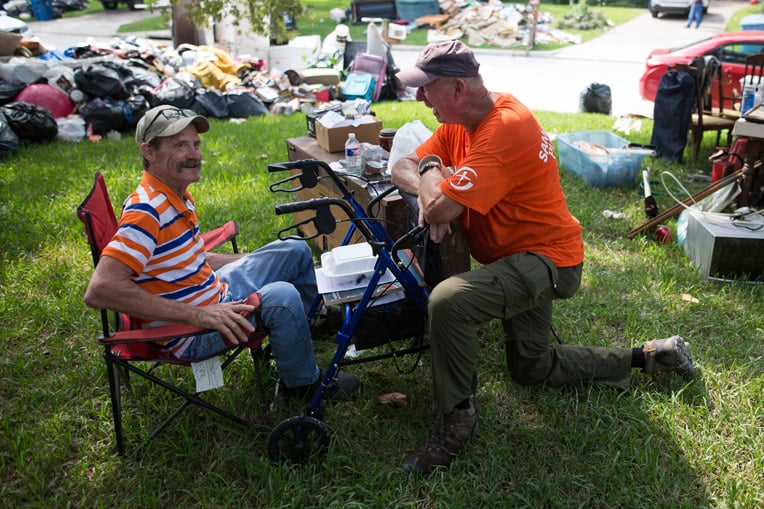 Doug Beem was diagnosed with neuropathy 15 years ago. He wears braces on his legs and uses a walker. The disease has worsened over the years, making ordinary tasks like yardwork nearly impossible.

When Hurricane Harvey flooded nearly every home on his street in Dickinson, Texas, he knew wasn’t going to be able to tackle hurricane clean up without some help.

So, he was grateful when an army of orange showed up at his doorstep to lend their muscle to his cause. Dickinson is about 10 miles north of Santa Fe, where Samaritan’s Purse has had a disaster relief base of operations since Sept. 1.

As Harvey’s relentless rains continued to pound the Lone Star state in August, Doug realized the situation was much worse than he anticipated. He thought he could wait out the storm upstairs, but before he knew it, his neighborhood was nearly under water. 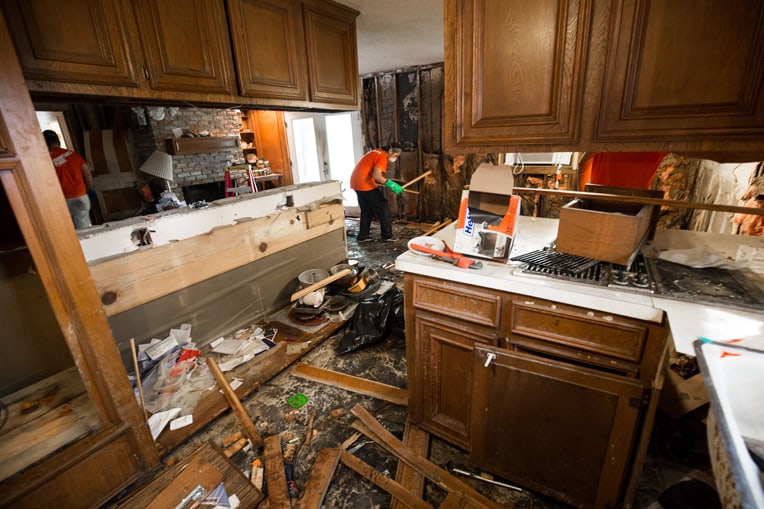 “The water was well over your head in the middle of the road,” Doug said.

Doug was relieved and overjoyed when a neighbor came to his rescue. “The boat was waiting for me at the front door,” he said. Doug already had four feet of water in his home.

Samaritan’s Purse volunteers brought hope during a season of struggle. They removed drywall and sheetrock. They also removed belongings and furniture from the home that were damaged or molded.

Our volunteers and Billy Graham Rapid Response Team chaplains prayed with Doug and presented him with a Bible signed by all the volunteers who worked on his home.

“You guys are God-sent,” Doug said. “I’m blessed to have people like ya’ll here.”

Every few minutes Debbie Cothern looked out the window as Harvey raged outside. She couldn’t bear to look but she couldn’t keep herself away, either. Water was already flowing into the backyard.

She tried to sleep, but her husband woke her up after midnight in a panic. He knew the floodwaters were coming for them. 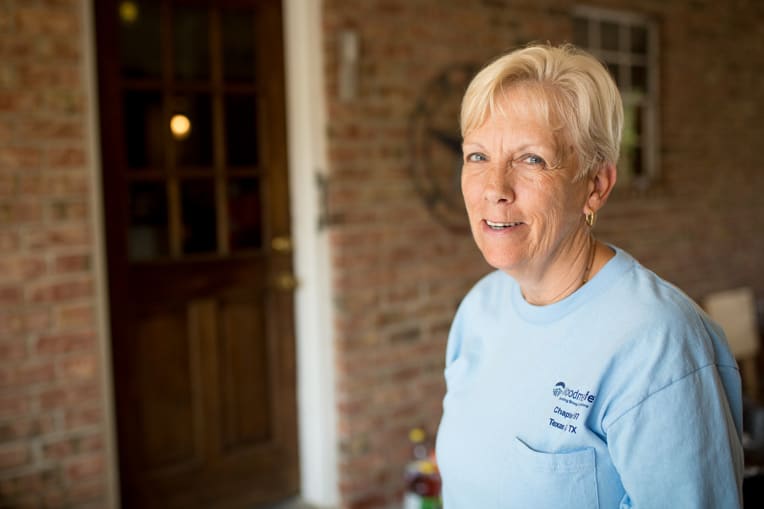 Debbie Cothern and her husband moved to Texas seven years ago.

Debbie and her husband and mother-in-law went to stay with a neighbor whose house was on higher ground.

“We were sloshing through water,” Debbie said. “The water got into my boots and made them so heavy that I had to take them off.”

The Cotherns had moved to Santa Fe from Indiana about seven years ago. They never expected a monster hurricane would displace them from their home.

Debbie worried for her husband, who immediately began trying to do all the hurricane clean up on his own. “You’re going to die if you keep working like this,” Debbie kept telling her husband.

Our volunteers helped the Cotherns rip out waterlogged drywall and sheetrock from the bedrooms.

“Thank God you called and said you were coming—and so fast,” Debbie said. “Thank you from the bottom of my heart.”

Elia Garza woke up in the middle of the night and was startled to see she had so many phone messages. Family and friends were frantically trying to reach Elia and her husband Julio.

The Garzas weren’t expecting Hurricane Harvey to bring historic rainfall. They’d gone to bed the night before thinking they would be safe. 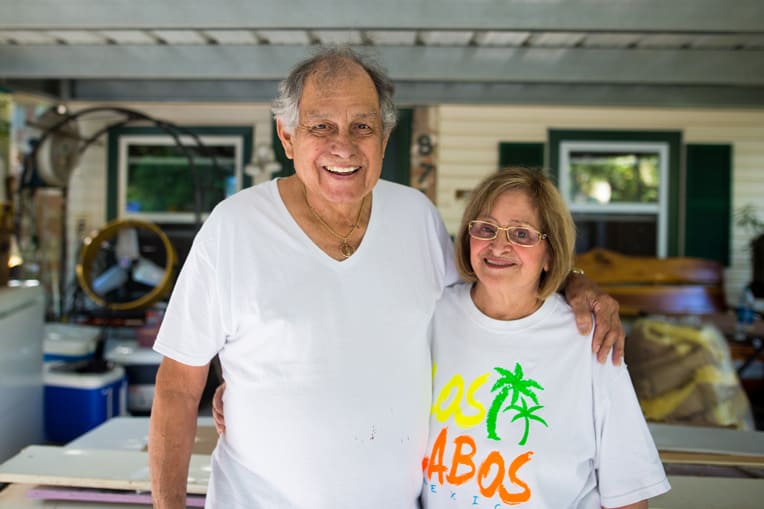 Elia and Julio Garza had to be evacuated from their home.

But early in the morning, their son had to come in his truck to evacuate them.

“The wind was so strong we had a hard time getting into the truck,” Elia said. “It was scary.”

Thirty-four years ago, after Elia and Julio lost their home and nearly all their belongings to the fury of Hurricane Alicia, they’d moved to a community that no one thought would ever flood. The couple was shocked to find themselves living the same nightmare all over again.

“We were not expecting this. I still can’t believe it,” Elia said. “We have no flood insurance.”

Elia has run a daycare out of her home for 37 years. Although she is disappointed that the daycare is closed until home repairs are finished, she’s grateful to the Samaritan’s Purse volunteers who worked hard to bring her one step closer to reopening.

Volunteers helped mud-out the Garza’s home by removing drywall and sheetrock. Elia was especially grateful for help because her husband recently had heart surgery and can’t do much physical labor.

The Garzas have a long road ahead, but Elia is thankful she survived and that all her family is safe. She chooses to look forward to more joyful times and to count her blessings.

“[Julio and I] will celebrate 60 years of marriage in December,” Elia said. “My family is number one to me.”

Anselma Caughman is another homeowner grateful for the work Samaritan’s Purse volunteers did on her flooded home. Water had reached even to the ceiling, and our teams cleared out all the drywall and removed debris on the floor. 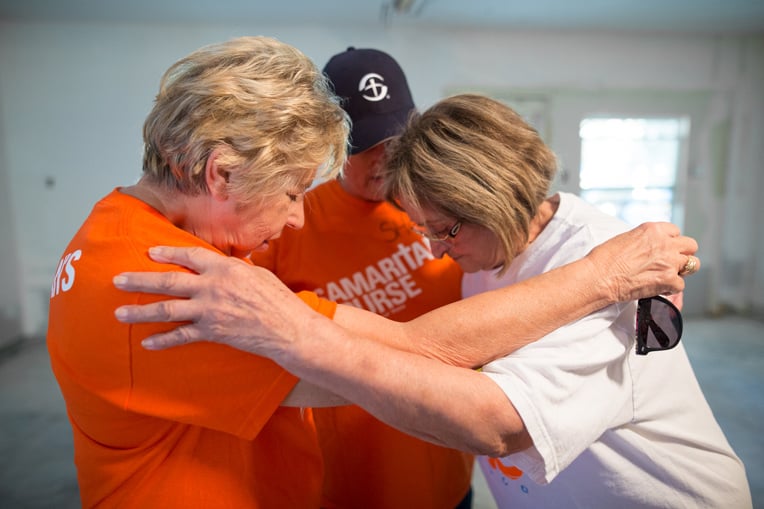 Volunteers pray with Elia before beginning their work.

“Thank you, Samaritan’s Purse, for coming to help,” she said. “Thank you, thank you so much.”

Beyond the physical work, God used Samaritan’s Purse volunteers as catalysts for a spiritual transformation as well. A couple of volunteers prayed with Anselma, and, by God’s grace, she was led to receive Jesus Christ as Lord and Savior.

The most important part of our Samaritan’s Purse disaster response is pointing people to Jesus Christ. “If we can do nothing else but encourage people to have a relationship with Christ, or strengthen the relationship, that will do more than anything else we can participate in,” said Keeth Willingham, program manager in Santa Fe.

The Santa Fe site is scheduled to close Saturday, Oct. 21. We praise God that from this base we have helped close to 500 homeowners and nearly 100 people have come to faith in Jesus Christ.