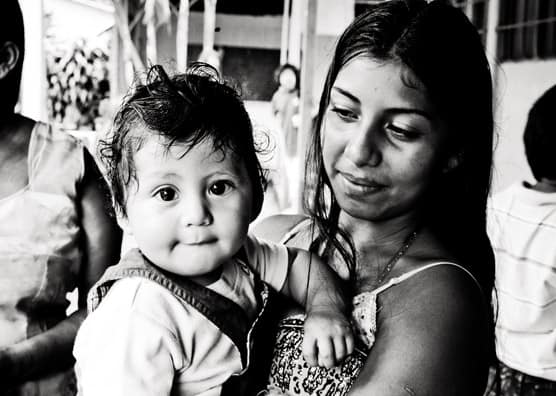 Homeless and helpless, a Costa Rican teen is forced to survive on the streets until a partner of Samaritan's Purse shows her compassion through food, shelter, counseling, and vocational training.

April, 2013—Though the rainforests of Costa Rica paint a lush and beautiful picture, the voices of the nation’s children tell a very different story. Multi-generational cycles of abuse and sexual exploitation are difficult to break, and some young people in Costa Rica continue to suffer because of them.

Alma* experienced these hardships as a girl. When she was just eleven years old, her father died. “My life changed drastically after this painful event,” Alma said.

Alma’s mother quickly lost interest in caring for her children and eventually abandoned them in order to live with another man. Homeless and helpless, Alma was forced to survive on the streets.

An aunt took her in, but turned her back on Alma when  the girl  became pregnant.  Alma was placed in a government-sponsored shelter, but even there she struggled.

“I was there for two months and it was very difficult because I was the only pregnant girl,” Alma remembered. “Everyone was very aggressive. The other girls  would steal food, and then we wouldn’t have enough to eat.”

She was six months pregnant when government officials moved Alma to our partner organization—a haven for teen mothers who have endured extreme poverty, abuse and exploitation. This home, supported by Samaritan’s Purse and generous Canadian donors, provides a safe, loving, Christian environment for young mothers and their children.

At first, the move was a difficult adjustment. Alma was starting over—again. “I stayed away from the other girls,” she said. “I did not eat and cried a lot.”

However Alma slowly began to trust the staff  and began to build friendships with  other residents who had experienced similar hardships. Through emotional support and Christian counseling, Alma began to heal.

Today, Alma—a proud mother of a little boy named Japheth—has come a long way from the streets. Because of the prayer and financial support of donors like you, our partner is able to provide Alma with important vocational and parenting skills.

“I thank all the people who help us every day! God bless you!”

Beyond the walls of this safe haven, countless Costa Rican children still need your help. As victims of poverty, exploitation and abuse, many live without hope. Yet our God sees what humanity often overlooks. May our hearts reflect God’s heart, who sees trouble and grief, and is the helper of the fatherless (see Psalm 10:14).