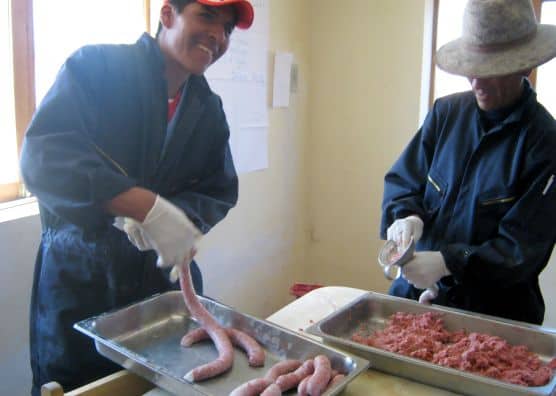 This initiative began seven years ago in Bolivia, with the encouragement of Samaritan's Purse, which supported the community members in improving production and infrastructure for camelid livestock breeding, industrialization and commercialization of products.

Llama jerky with corn for school breakfast, sausages and meats are some of the products derived from meat called “Suma Aycha” (Good Meat), a brand created by community members since 2008, who worked to increase their incomes by improving the quality of their livestock.

“With Suma Aycha, we want to give people of the city, which only consume chicken, cow or beef, an alternative to vary their diet and improve the nutrition of their families,” said Javier Alarcon, general manager of the Association of Camelid Producers of Achiri (Proca Achiri), an organization composed of 15 families that promote llama meat processing and products.

“We have two main objectives: to have good quality cattle to improve revenue and prevent the migration of young people from rural to urban areas creating employment,” said Abraham Quelca, legal representative of the association.

The initiative began seven years ago in the community of Achiri located in the district of Caquiaviri, part of the province of Pacajes (southwest of La Paz), with the encouragement of Samaritan’s Purse, who supported the community members in improving production and infrastructure for camelid livestock breeding, industrialization and commercialization of products.

“We started selling raw jerky and precooked jerky with corn for school breakfasts (municipal schools) along with a cañahua beverage, which is also produced in the area,” Alarcon said. With that experience, the organization decided to enter the market of La Paz.

To expand its production capacity, Proca Achiri built a processing plant, which was certified by the departmental and national health authorities, said Alarcon.

The offer includes sliced jerky, julienne cut, crispy and cooked with corn; smoked and fresh sausages; smoked and fresh loin; salami, bologna and other customized products that are sold to hotels and restaurants that cater to tourists, and organic stores.

By buying and consuming these foods of “high value” the people of La Paz “are supporting a group of people wanting to improve their standard of living in an area located 120 km from La Paz, where the only source of income is the production of camelids,” said the national program director for Samaritan’s Purse, Enrique Carrasco.

Proca Achiri signed contracts with some hotels and organic food stores in the city, since the launch of the brand. “This is a gradual growth, after first being departmental and soon national,” said the general manager of the association. “They are continuously working on improving their products. We have helped them launch the brand and from now on they can continue on their own,” said Carrasco.

Llama meat has more protein than other meats and its low fat content does not affect the formation of cholesterol, agreed the representatives of Proca Achiri and Samaritan’s Purse.

Previously, the mortality rate of the cattle in Achiri was very high, “due to how the population handled the animals”; but this situation was reversed with the joint work between Samaritan’s Purse and the community.

In the first phase, forage and feeding quality was improved, and deworming, vitamins and vaccines were introduced. The second phase involved the development of infrastructure for livestock (corrals and watering troughs were built). The third phase focused on introducing improved animals with higher genetic quality in the breeding process.

In the fourth phase, the implementation of a processing plant gave a higher value to the production of meat, and the last phase consisted in the creation of “Suma Aycha,” trademark of the Association of Camelids Producers of Achiri.

This article was translated from Spanish. Read the original article here: http://www.la-razon.com/suplementos/financiero/Suma-Aycha-diverso-paladares-pacenos-financiero_0_2111788935.html