Stories from the rubble of Nepal 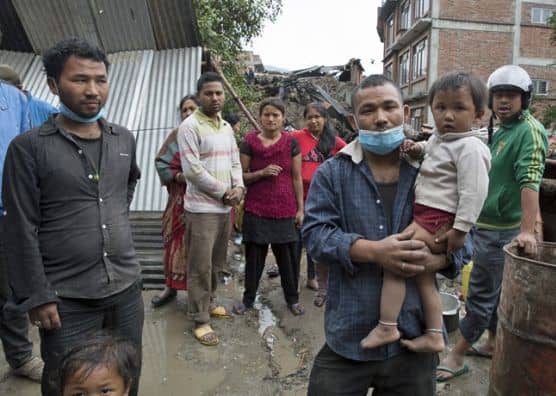 Encountering survivors who lost everything in the Nepal earthquake.

April, 2015—We walked into Bhaktapur today as a group of Nepalese military walked out. They told us they had just pulled another dead body from the rubble.

This city is in the east of the Kathmandu valley and home to about 300,000 people living in ancient brick buildings with narrow alleyways—the kind of buildings that can’t withstand a massive earthquake and alleys that can’t accommodate rubble removal equipment.

The road was clogged with pedestrians, bicycles, and motorbikes navigating on top of the bricks, debris, and dead power lines. The sides of some buildings had completely fallen off so you could see straight into the empty bedrooms and living rooms like a child’s dollhouse.

I stopped to look up at a tall structure with cracks running down its face, and a man urged me to keep moving. He pointed up and said, “Another one’s coming!” If another aftershock hits  (and there have been more than 100 already) it could send the building down.

We reached the common area of one block as rain began to fall and ducked under a tarp where about a dozen people were sitting, mostly women and children. They told us they have all been sleeping there since the earthquake.

A man named Ramesh pointed to his home and small shop across the street and said it was too damaged to live in.

He also explained that the trauma of the earthquake and aftershocks have made people afraid of sleeping anywhere near a building.

“People haven’t left Bhaktapur,” he said. “This is their home. But they have gone out into the fields, any open space outside the walled city, to be safer there.”

It started to rain harder, and one of the ladies put out buckets to catch water running off the tarp.

“Food and water is scarce,” Ramesh went on. “The markets are closed. No one has food to sell. We are living off of whatever we had in our homes.”

Then it rained so hard we could barely hear each other, and Ramesh said they actually only had enough food to last through the night.

The Pain of Loss

When the rain let up, we ventured further into the city and came upon a section that was roped off because of the mountains of debris. A middle-aged man walked up crying, saying over and over: “We can’t get to the bodies. The smell keeps coming to us.”

Down the next alley and around some corners, we had to stop—both because of the jarring sight and the fact that we couldn’t go any farther. A building housing 30 members of an extended family had fallen into the street with a pile of rubble nearly as high as the building across from it.

Surrounded by his extended family, Ram told us they had lost everything in the earthquake.

“What we’re wearing is all that we have,” he said.

The family is living in a makeshift tent on a neighbor’s property, eating dirty food and drinking dirty water.

One of his male relatives explained, “Our concern is not just us, it’s also the remaining children that are still alive. How do we take care of them? How do we make sure their safety is secure?”

Before we left, Ram opened his wallet and showed us the most valuable possessions he has left—three photos of his mother Maya, his wife Bimala, and his older daughter Binu.

Samaritan’s Purse has come to Nepal to help people like this. These are the people you have been praying for. These are their faces.

We know our abilities as humans are small, but we serve a great God. We are trusting Him to guide our efforts as we provide relief items to earthquake victims. Your partnership matters, and we look forward to sharing with you how God uses Samaritan’s Purse to bring hope and healing to the people of Nepal.