Sometimes what needs to be restored is trust 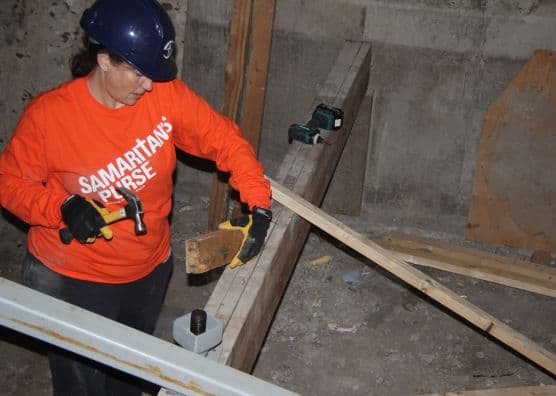 I was  often reminded of how privileged our team was  to fight for people who were  still struggling because of the 2013 Alberta floods.

One day  I drove to High River, a town that was slammed by the flooding Highwood River and that, in many places, still resembled a disaster zone. The family I met with had recently immigrated to Canada. They spoke little English, so I asked my colleague, who is fluent in Spanish, to come along.

We met a lovely woman from Latin America, along with her two brothers, her nephew and her nephew’s wife—all of whom live together. Their basement was destroyed by the flood.

But that was only the beginning of their struggles.

As they began to put the pieces of their home back together, the family hired a contractor to put in a furnace for them. And despite the tragedy and deep financial losses they had endured, the contractor cheated them.

He installed the furnace for an outrageous sum. He then proceeded to charge this family for work they had done themselves, without even providing a quote on the cost of his labor from the get-go.

The family-new to Canada and without the knowledge they needed to protect themselves-had him do the work, only to be billed an astronomical fee later on.

The woman cried as she shared her story with us. Even when we assured her that Samaritan’s Purse’s Southern Alberta Restoration Project would cover the cost to restore her home and offer the family support along the way, she kept repeating “I cannot pay anything.”

Her  trust in others  is being  restored

She didn’t believe that we were there to help. And why should she, after being treated so poorly?

I was shocked and angered by their experience. In the aftermath of a disaster, pain and grief are regular companions for survivors-but abuse shouldn’t be part of that equation.

Through the Southern Alberta Restoration Project, our organization and Good Samaritans across our province had  the opportunity to fight for people like this family. We were  privileged to offer help and hope to people who were  hurting, and to walk through that  season of life with them.

And as we walked with these families, we also knew  that God was and is  fighting on their behalf.

Editor’s Note: The Southern Alberta Restoration Project was a special ministry of Samaritan’s Purse that helped dozens of families repair their homes after the 2013 southern Alberta floods.