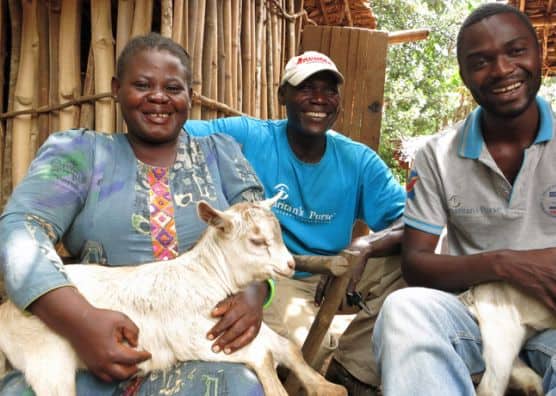 A goat project provides a means of income and evidence of God’s love to a mother forced to flee fighting in the Democratic Republic of the Congo.

Two years ago, Mwapili Funzi was driven out of her home village of Alima in the eastern part of the Democratic Republic of the Congo (DRC) by rebel violence.

The northeastern part of the DRC is home to over 25 rebel groups that cause violence and force many people in the country out of their homes. Over 300,000 people have been displaced in the province where Mwapili is from. It is still unsafe for people to return to their homes for fear of more attacks.

Mwapili, a 31-year-old single mother, had to leave everything behind when she was forced to flee from her home, including clothes and other possessions. She was barely making ends meet and was having trouble providing for her three-year-old daughter, Saidi.

She has a physical handicap that makes it difficult for her to work in fields or do other jobs that would have made her money. She tried to sell fried donuts on the side of the street to make money, but mostly depended on others for help.

One day, Samaritan’s Purse sent out a team to find beneficiaries for a goat project.

Samaritan’s Purse gives three female goats to each recipient and then also gives a male goat that the beneficiaries trade around to continue to grow their herds. People can then sell the offspring as well as any extra milk. The income from the animals helps pay for food, school fees, and household items.

Mwapili was overjoyed when she was told that she was selected to receive three goats. Since Mwapili received her goats, two of them have already had babies and now she has a herd of five.

“In two months, the Lord has blessed me with five goats when I had absolutely nothing for a long time,” she said. “Samaritan’s Purse has shown me love that has given me back hope. I felt hopeless for a long time, but God remembered my suffering.”

Samaritan’s Purse is working in the DRC to help restore livelihoods to people who have had their lives turned upside down by rebel violence. Other projects have supplied vulnerable families with  seeds, tools, access to land, and agriculture training so families can not only better provide for themselves, but also regain a sense of dignity and security.

You can give the gift of goats and other agricultural resources through the Samaritan’s Purse Gift Catalog.