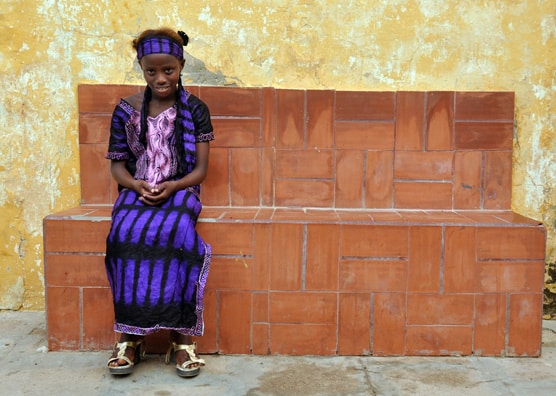 Her gift-filled Operation Christmas Child shoebox arrived several months ago, but 10-year-old Adja has no trouble remembering almost everything in it.

The box of items many Canadian children would quickly forget was the first gift she’d ever received. Where she lives, in the west African nation of Senegal, poverty is so crushing that many parents can’t afford to give their children gifts at Christmas, birthdays, or any other time.

“(The gifts) mean a lot to me,” Adja says shyly. She is wearing the best clothes she owns to look presentable for Canadian visitors assessing the impact of Operation Christmas Child in Senegal.

During the past 20 years, Operation Christmas Child has collected and distributed more than 100 million gift-filled shoeboxes, including more than 10 million packed by generous Canadians like you, to hurting children around the world.

Adja lives on Goree Island, just off the coast from Dakar, Senegal’s capital city. The island features colorful and cheerful houses that contrast starkly with Goree’s horrific past. For more than 300 years, the island was one of the main centers for brutally housing millions of slaves before they were shipped to Europe, the United States, and Latin America.

It’s this tragic history that Senegal and many other west African countries are still contending with today, along with widespread poverty and a lack of basic infrastructure. And these circumstances are why Samaritan’s Purse is active in the region.

Since 2003, we have distributed more than 560,000 Operation Christmas Child shoeboxes to children in Senegal.

In addition, we are partnering with local churches to offer The Greatest Journey-a  12-week voluntary, follow-up discipleship program-to children who have received shoebox gifts. In the past year alone, 2,800 children in Senegal have taken the course and 1,500 have publicly committed their lives to Christ.

We are also using gifts from donors like you to finance projects that minister to farmers, and others that help children who are homeless and living on the streets-projects we learned about through Operation Christmas Child.

Back on Goree Island, little Adja doesn’t know that Samaritan’s Purse helps others in need. But she does know something about Canadians who pack Operation Christmas Child shoebox gifts.

“They are nice people,” she says. “They love me. That’s why they sent me this box.”