Sharing Christ in Peru with a brother in the Lord 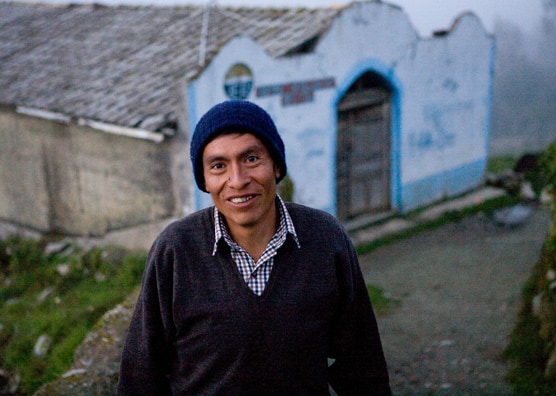 May, 2013—On a recent field visit  to Peru, I had to travel on a bus, and I have to admit that I wasn’t looking forward to the journey. Don’t get me wrong, Peruvian buses are comfortable alright, but four hours seemed like it would take forever.

Reluctantly I took my seat, hoping the TV worked and would entertain me with a couple of movies. Just before the bus departed, a young man sat down beside me. I greeted him and we started to chat. Some people don’t like it when strangers start talking—and I’ll admit I am often like that—but the conversation continued. I soon realized it was one of those times when you sense that a door for witnessing has opened. Would I be bold and share my faith with this fellow traveler, or would I shy away, maintaining just a pleasant but pointless conversation?

Feeling the nudge of the Spirit, I prayed for wisdom and boldness, and continued to share about my faith and my work with Samaritan’s Purse.

It was  the start of  a great conversation. I could tell that his heart aligned with the teachings of Christ. As a supervisor of  more than  40 people, he understood the need to be compassionate, generous, and to treat people fairly. He openly showed interest in the word of God.

By this time we had exchanged names, and I felt I needed to leave him a gift—my beloved Spanish Bible. First I asked him if he owned a Bible. He was surprised by the question and answered no. When I asked, “Would you like to have one?” he was equally surprised. So I stood up, picked the holy book out of my backpack, and simply handed it to him.

“This is the greatest gift I could ever receive,” was his humble reply.

“Jesus is the greatest gift given to us,” I said. I was able to share the Gospel with him and invited him to receive Jesus. His simple yet genuine faith pushed him to respond: “I did when I received this gift.”

I offered to pray for him and entrusted him to our Lord’s care. We were now brothers in the Lord and I could tell he was thankful for what just happened.

I encouraged him to start reading the Gospel of John, find a church, and keep growing in his newfound faith. The marvels of technology allow us to stay in touch via Facebook, and I invited him to ask me any questions as he continues on his faith journey. I also offered to connect him with a pastor in Peru.

By then, four hours later, the bus was pulling over at my destination. I said goodbye and stepped off the bus, thankful for an unexpected opportunity to share God’s love with a former stranger, now a brother in the Lord.