Samaritans to the rescue 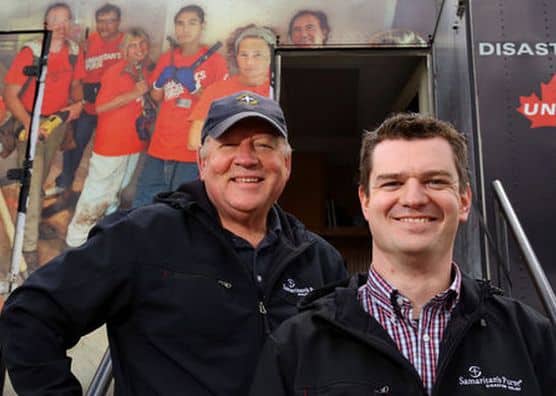 Samaritan's Purse emergency and disaster response team is in Belleville, responding to the flooding in the area. Staff will likely remain in the region for at least three weeks to co-ordinate volunteers as they help Hastings County residents repair their flood-damaged homes.

Written by Luke Hendry
Published by Belleville Intelligencer on Friday, May 2, 2014

Southern Hastings County’s flood victims are about to get some heaven-sent help.

“It’s the people who fall through the cracks that we want to help the most,” said regional representative Steve Elliott, a Belleville native who from 2002 to his 2013 retirement worked for Emergency Measures Ontario.

Work could begin as early as Wednesday.

“We anticipate being here for at least three weeks,” he said, explaining the team will recruit and manage volunteer work crews to prepare local homes for repairs.

They’ll assign priority to the most vulnerable: seniors, single parents, people with disabilities, and those with low incomes.

Help is not available for seasonal properties or those for which insurance will pay for damage.

“There’ll be an assessment done of each house that has been affected,” Elliott said.

Acting Chief John O’Donnell of Hastings-Quinte Paramedic Service admitted he at first thought the offer sounded “too good to be true” on April 23 when Elliott called him.

But he said they accepted it gladly.

Damage in Centre Hastings was limited mainly to properties on Moira Lake. O’Donnell said it seems residents may not need the charity’s aid but it remains possible.

The charity will co-ordinate volunteer workers.

“We partner with local pastors and churches,” Elliott said.

After priorities are decided, he said, the “mud-out” process begins.

Teams will move all of residents’ belongings to a safe location, sorting out damaged items.

They then start the “gut-out” phase, removing damaged drywall and other materials so that homes can dry.

“Within about two weeks the owner can begin roughing in their home again,” said Elliott.

He said Samaritan’s Purse also partners with other agencies and charities for further aid, but that hinges on its initial assessments.

“This is going to be a big help,” said Acting Fire Chief Mike Broek of Tweed.

He said Tweed has issued about 600 notices to affected residents about possible provincial funding and estimated about 250 may qualify for the Samaritan’s Purse program.

Broek said municipal workers have heard little from residents and “basically we’re going to have to wait for people to come forward.”

“That was the biggest challenge through the flood: trying to manage 1,600 people through three of us.”

“These people need help now,” he said. “Homeowners need to know we haven’t forgotten about them.”

But the city is still assessing the full extent of the damage, he said.

“Municipalities don’t have the resources to deal with this.”

O’Donnell said the charity won’t help every victim, but Samaritan’s Purse will be a major boost to the cleanup effort.