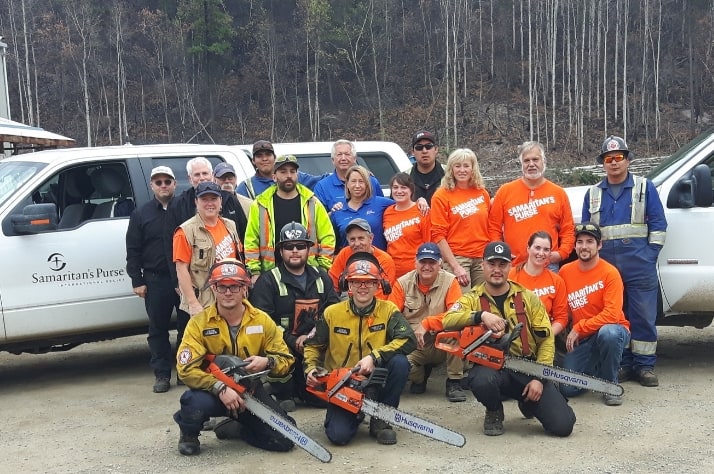 Samaritan’s Purse volunteers describe their experiences serving residents of northern B.C. who were victims of the summer 2018 wildfires

After a huge forest fire caused the evacuation of the northeastern B.C. town of Telegraph Creek last August, many evacuees were sheltered in Dease Lake, 112 km away. Volunteers like Rosanna and Tom Morin were there to help.

The young couple took a month from their home near Hudson, ON, and traveled 3,500 kilometers to Telegraph Creek to sift through the ashes of burned-out homes to salvage keepsakes for the families who lived there.

But when the fire continued to threaten Telegraph Creek, officials closed access to the town for another three weeks. Tom and Rosanna spent the interval working at the Samaritan’s Purse Ministry Center in Dease Lake.

The ministry center, established in 2013 as a community outreach to local young people, including many from the Tahltan First Nation, was where evacuees, firefighters, and recovery crews were fed during the crisis.

Tom and Rosanna made lunches, mopped floors, and generally got to know the evacuees, who at first seemed puzzled by the cheerful couple.

The door opens to meaningful conversation

One evacuee asked Rosanna: “Why are you smiling? Why is everyone so happy? Why are you all here?'”

“He had observed what we were doing and then opened up,” Rosanna recalled.

She and Tom soon developed a strong rapport with the evacuees, especially those struggling with the painful reality that their homes had been burned to the ground.

“We came without an agenda [and it] allowed us to build relationships,” Rosanna said.

After they were allowed into Telegraph Creek to begin the sifting work, she and Tom frequently found items among the ashes that reflected the enduring Christian faith of the people whose homes were destroyed.

“In almost every house, there was something that represented God—a cross necklace or cross earrings,” Rosanna said. “In one house, most things were broken but a whole Nativity scene was complete. I thought ‘Lord does speak through this. He leaves His mark.'”

Rosanna and Tom are relatively new to Samaritan’s Purse. They first volunteered in early 2017 by cleaning up after flooding in southeastern Ontario. Their church, Hudson Community Baptist, hosted one of Samaritan’s Purse’s Disaster Relief Units that are filled with clean-up equipment and supplies for willing volunteers.

“We got into it as an opportunity to serve in our local community,” Rosanna said. “They were looking for volunteers and we just kept going back for over two weeks. It was an opportunity for us to serve in a way that was easy for us, and we worked with a wonderful group of people.”

Donations from Canadians like you paid for the tools and safety equipment worn by Rosanna and Tom while they were sifting through the ashes of the destroyed homes in Telegraph Creek.