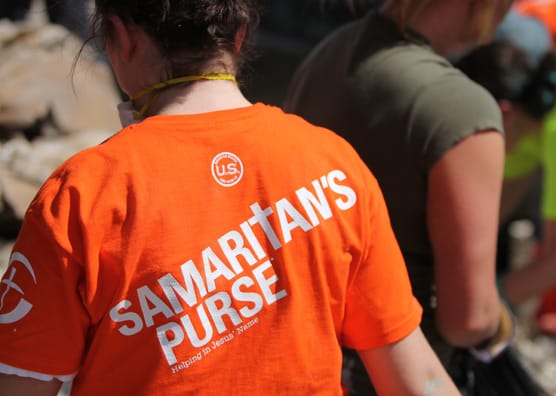 A Calgary man affected by the 2013 floods received a propane tank from Samaritan’s Purse volunteers, enabling him to barbecue food until the floodwaters receded and utilities were restored.

As rainfall slammed southern Alberta with more water than its rivers could hold, murky overflow from the Bow and Elbow rivers quickly filled Calgary’s downtown core. Al Vescopara was one of the many residents who was stranded.

“Like everyone else, I was without power,” Al recalled. “Even though the showers were cold and there were no lights, I had lots of backup food and I was doing quite well-that is, until I ran out of propane.”

Unable to use his barbecue, Al’s food was suddenly very limited. He had one option: make it through the flooded streets and police barricades to purchase propane.

“I thought they might let a 59-year-old man through-not a chance,” Al said. “I understood their answer, which was to protect people by closing down the downtown core.”

As he stood contemplating his limited options, Al met Derek and Donna. Volunteers with Samaritan’s Purse, they were also at the police checkpoint, asking if they could bring a vehicle through loaded with propane tanks to help people in the area.

Al was blown away.

“Rarely am I at a loss for words, but all I could think was, ‘Are you kidding me?'” he said. Derek gave Al his phone number and promised to return if they could get approval. Within three hours, they returned with a gift that helped Al feed himself until flood waters receded.

Samaritan’s Purse is only able to help disaster  victims in Jesus’ Name because of the generous financial support, prayers, and volunteer hours of people like you.