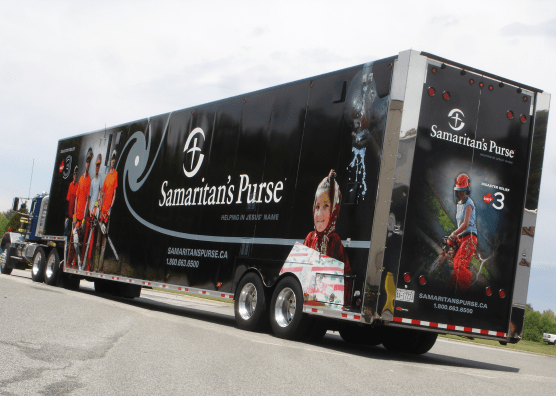 Samaritan's Purse responded to severe flooding near Pemberton, BC in November 2016, helping Lil'wat Nation families clean up their damaged homes.

“We want to do all we can to assist families who are facing such difficult circumstances,” said Brent Davis, Samaritan’s Purse Canada’s response director. “To be as effective as possible, we are in direct contact with community partners in the area to provide a coordinated response.”

The Christian relief and development organization moved  its Calgary-based Disaster Relief Unit to Lil’wat Nation (near Pemberton), so staff could  meet local homeowners and recruit and train volunteers.

The Disaster Relief Unit is a tractor trailer outfitted with essential disaster recovery equipment including generators, pumps, hand tools, and safety gear for volunteers. It also serves as a volunteer coordination center, and is equipped with a self-contained office, communications system, and other supplies.

Heavy rainfall and warmer temperatures caused snow to melt and flood the banks of the Lillooet River on November 10. As a result, as many as 20 homes were  flood-damaged in Lil’wat Nation.

Samaritan’s Purse has other Disaster Relief Units based in southern Ontario and in New Brunswick. In recent years, the non-profit organization has responded to a wide variety of natural disasters including the catastrophic 2016 wildfire in Fort McMurray, Alberta, and flooding in New Brunswick, Quebec, Saskatchewan, Nova Scotia, and British Columbia. Its “sister” organization, the Billy Graham Evangelistic Association of Canada, often helps by providing specially trained chaplains to comfort and pray with disaster victims. Billy Graham Rapid Response Team chaplains were in Lil’wat Nation, too.

Samaritan’s Purse also responds to international disasters including the 2011 earthquake/tsunami in Japan, Typhoon Haiyan in the Philippines in 2013, the 2015 earthquake in Nepal, and Hurricane Matthew in Haiti. The Calgary-based charity is continuing to assist in Haiti.