Samaritan's Purse staff are on the ground and working to set up an emergency field hospital. The first of three airlifts arrived in Ecuador on April 20.

April, 2016—A 7.8-magnitude quake rocked Ecuador’s northern coast late on April 16, killing hundreds and injuring thousands more. Well more than 650 individuals are confirmed dead and the toll continues to rise. This was the deadliest earthquake to strike the South American country since 1987.

“The earthquake in Ecuador has caused incredible death, injury, destruction, and loss,” said Samaritan’s Purse President Franklin Graham. “We’re responding as quickly as possible to help with emergency needs such as water, shelter, and medical care. We help in the name of Jesus Christ and want to show people His love. Please keep them in your prayers.”

When the quake hit, Maria Rivademeira was at home with her two children. She was holding her youngest baby, so when the ground first began to shake, she thought he was just moving in her arms. As the shaking grew more violent, she realized it was an earthquake.

Maria quickly called out to her eight-year-old son, and together they stood huddled in the doorframe, praying for their lives. She said it felt like the whole house would collapse. As the shaking grew worse and worse, she knew that only God would be able to save them. She knelt to the ground and begged for His protection.

“My trust is always in God,” she said. “It is not in my hands. I always know that He has the last word.”

Maria described it as a terrifying experience and said that she wanted to cry and run, but she had to be brave for her children.

In a series of five flights that started on April 20, Samaritan’s Purse sent an emergency field hospital along with medical staff to treat the suffering in Ecuador. The hospital has been set up on the grounds of Napoleon Davila Hospital in Chone. Maria’s uncle, who was injured in an aftershock, was one of the first patients.

“This hospital is designed  for speed,” said Elliott Tenpenny, emergency medical specialist with Samaritan’s Purse. “Our goal is to get there first and to address the most pressing need, and that’s surgery and trauma care. Getting there first and getting there fast is what matters. We need to be able to operate anywhere in the world.” 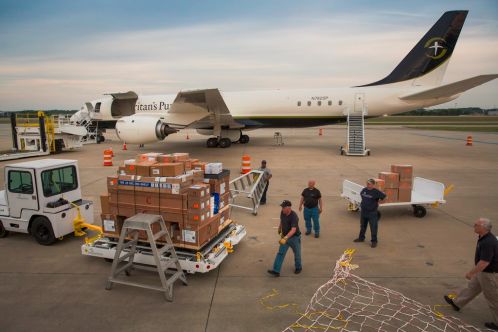 The DC-8 landed in Ecuador with its first shipment on Wednesday, April 20. Samaritan’s Purse is establishing an emergency field hospital in Chone, along the country’s devastated coast.

Samaritan’s Purse is using a recently-refurbished DC-8 cargo plane for transportation. The workhorse vehicle can carry 40 tons of emergency supplies and dozens of personnel to bring relief to traumatized survivors.

“This plane and this hospital gives us even more capacity to respond in Jesus’ name around the world,” Graham said on April 20 from the airlift event in Greensboro, North Carolina. “This hospital could be the only hope for thousands of people to get healthcare right now.”

The emergency field hospital is a mobile unit that will give Samaritan’s Purse a physical location to treat and help patients in need. It will have an emergency room with the capacity to see more than 100 people a day, an operating theatre with the ability to perform 7 to 10 surgeries daily, 20 inpatient beds, and an outpatient clinic with an adjunct lab, ultrasound imaging capabilities, and onsite pharmacy. Approximately 40 medical personnel will staff the field hospital each day.

In addition to helping relieve the overwhelming medical need, Samaritan’s Purse is also at work to bring clean water to 50,000 people and to meet shelter needs for 5,000 households in Pedernales, Chone, Jama, and possibly other affected locations.

We are  working through church partners as this response develops. About     eight percent of the Ecuadorian population consider themselves to be evangelical Christians.

“Ecuador is suffering,” reports our field staff. Some roads are impassable; buildings are destroyed; communications have been disrupted; and there are power and water outages. Billions of dollars in damage has occurred.

Please pray for the Ecuadorian people as they face this disaster. Pray as the field hospital begins to accept patients.