Samaritan's Purse responds to a major earthquake in China 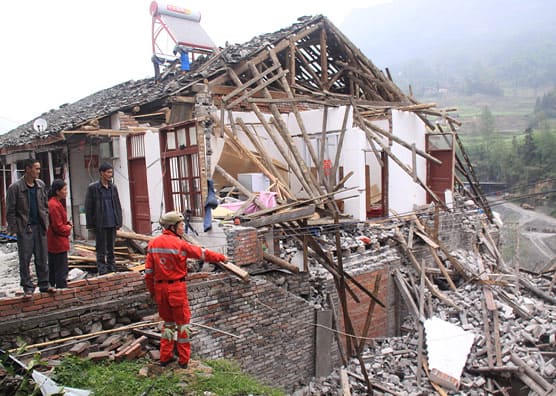 Samaritan’s Purse International, together with our church partners, is responding to a destructive earthquake in China.

On Saturday, April 20, 2013 China’s mountainous Sichuan province was rocked by a 6.6 magnitude earthquake that killed close to 200 people and sending about 15,000 more to hospital.

Approximately two million people were affected—and our Christian church partners were some of the first to respond to the devastation.

“In Lushan County, there are a large number of collapsed or dangerous houses and buildings, which were split from the bottom to the roof,” said one of our partners. “Many people have no place to live.”

One church has opened its doors as a temporary shelter, receiving those affected by the quake and mobilizing believers to help deliver life-saving resources.

Church teams are driving carloads of bottled water, quilts, clothing, instant noodles, candles, medicine and toiletries into the devastated communities. Tents are next on their list, along with more of the most-needed items: food, water and medicine.

“The roads to the hit area are crowded, so it is very slow transporting relief materials in,” said our partner. “Materials are in very short supply in Lushan now, so they may have to be purchased from other cities.”

Pastoral staff trained in search and rescue also participated in the effort to find survivors. Moving forward, the churches will continue to monitor the needs of those affected by the disaster and make plans for the distribution of medical services, counseling and more resources.

“We ask for your continuous concern on those people influenced by this disaster, and thank you for your support,” said our partner.

Samaritan’s Purse International also responded to a massive earthquake in the same region of China that killed 70,000 people in 2008.