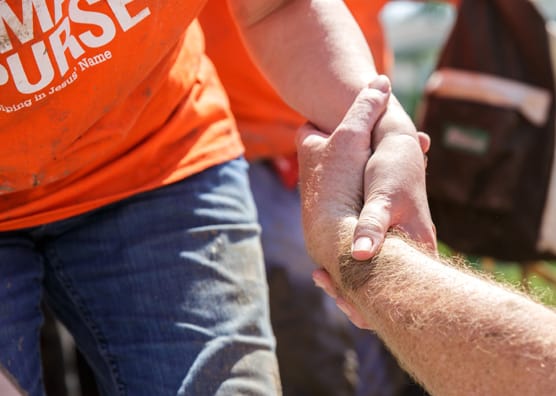 Samaritan's Purse is responding to the flooding in Burlington, Ontario.

Gail Kranstz’s basement is hot this morning, with a pungent odour coming from the floors and walls.

There is water damage and large spots of black mold on the tile floor, but the conditions don’t appear to bother a crew of four volunteers who are chipping away and removing pieces of flooring.

The volunteers are here through Samaritan’s Purse Canada, a Christian relief and development organization.

Crews of volunteers with the non-profit arrived in Burlington on Monday, Aug. 11 to help in the aftermath of the Aug. 4 storm that flooded at least 2,078 basements.

“I don’t think I’ve ever experienced something like this in my life,” said Kranstz. “They don’t care whether I’m a member of their church, or not. I have been telling everyone I know about these people. The work they do is phenomenal.”

Samaritan’s Purse volunteers have worked on more than 40 Burlington homes to date, with another 10 currently on a waiting list.

Organization members are hoping to spread awareness of their free services, explaining they know there are likely a lot of Burlington residents who were flooded and could use a hand.

The work is done by volunteers with experience in flood recovery, according to Steve Elliott, base manager with Samaritan’s Purse Canada.

“We’ll remove everything right back to the foundation walls, at which time we’ll power wash everything and spray it with a mold inhibitor,” Elliott told the Post on site this morning, wiping away sweat from his brow created from working in Kranstz’s basement. “We leave their house as clean as when we first got there, sometimes a lot cleaner.”

Kranstz moved to her pretty townhouse on Longmoor Drive in 1999. She has never experienced a flood in her finished basement.

After the Aug. 4 storm that brought an estimated 200 millimetres of rain in a few hours, nearly every unit in her townhouse complex was flooded.

She unnecessarily apologized this morning for the state of her house. Boxes and furniture are scattered around her kitchen and living room, with tarps covering the floor through the kitchen to the basement stairs.

Kranstz recalls going downstairs for a can of beans from her pantry the evening of Aug. 4 and seeing water on her floor.

She thought it was a leak from her washing machine, but soon realized her basement was flooding with dirty water.

Kranstz, her father and her son bailed out water using every means possible until the water was gone at 4 a.m.

She worked barefoot for lack of boots and as a result, developed infection in her feet. More than two weeks later and a round of antibiotics, her swollen feet are not quite healed.

“I just needed to get the water out,” she said, looking at her slippered feet.

Her freezer is ruined, furniture has been lost, the washer is likely a write off and the laminate flooring is sitting on the curb waiting for garbage pickup.

To date, the Burlington woman doesn’t know how much damage there is or the extent of her coverage. Her voice cracks with emotion as she talks about the ineffective communication with her insurance company.

Overwhelmed by the smell and state of her basement, she contacted Samaritan’s Purse last week.

“Steve called, he came out, he filled out a work order,” she said. “That night was the first night I actually slept.”

Volunteers arrived at her house first thing this morning to remove the flooring.

Elliott said Kranstz’s experience is one of many sad stories they’ve encountered during their time in Burlington.

“It’s been very emotional for them (homeowners)-they’ve told us that they never thought they’d be able to get the work done by complete strangers coming into their house,” he said.

“They are overwhelmed by the generosity and the people they may never see again.”

He said the more than 60 volunteers are encouraged by the difference they are making in the lives of people who have been devastated by the flooding.

“They view it as a privilege to work on people’s homes,” he said. “They want to do this. This is their outreach. This is the story of the Good Samaritan being played out in real time.”