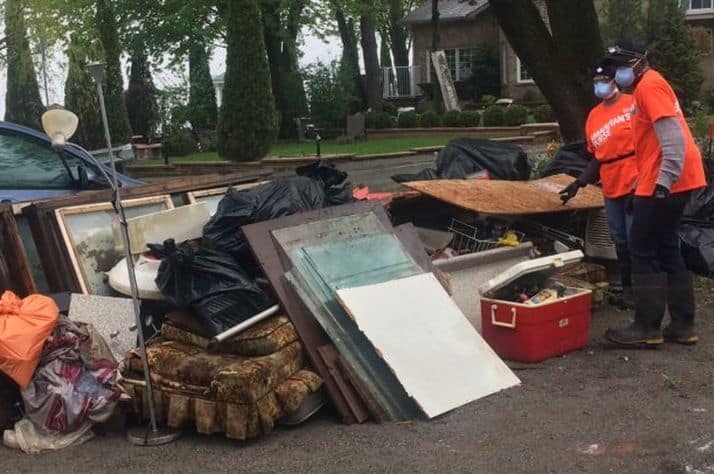 “If someone wants to talk, we listen. They’re on a journey and we walk beside them.”

Samaritan’s Purse has jumped into gear, offering help to those affected by this year’s flooding in Ontario and Quebec. They partnered with the Metropolitan Bible Church (the MET) to help local residents with the onerous cleanup.

“Their Disaster Relief Unit, which is set up at the church, is equipped with its own office, tools, equipment, and safety gear,” says Anne McGregor, the MET’s director of city outreach.

The MET is providing meals and space for volunteers to sleep while they clean properties and remove the water-contaminated material—everything from furniture to drywall, ceilings and flooring. After clearing the debris, the teams spray the houses with a mold inhibitor.

“This base of operations is looking after Gatineau and Constance Bay. We assess what needs to be done and tell the homeowners,” says Steve Elliott, Regional Coordinator of Disaster Response for Samaritan’s Purse. “We want to establish ‘lighthouse churches’ like [the MET]. We’d like to identify churches that have the capacity to partner with us in case of disaster.”

“If we want to touch our city, we need to love and serve our city.”

Floods are always stressful situations. To make things worse, many home owners did not realize they lacked insurance coverage.

“I tell volunteers to be sensitive, caring, and compassionate,” says Stephen Joudry, Regional Coordinator in Eastern Canada for Samaritan’s Purse. “If someone wants to talk, we listen. They’re on a journey and we walk beside them. When we’re done working, we pray with the homeowner and give them a Bible.”

“If we want to touch our city, we need to love and serve our city.”

“I appreciate the help these people gave us. We’ve lived here 59 years. My brother, Bernard, slept downstairs. He lost his bedroom and the kitchen. I hurt my leg while removing debris from the basement.”

“After the flooding, it was on my heart to form a team to help on Hurtubise Street,” says le Chemin pastor Jean-Pierre Leroux. “I invited other pastors to join me. The response was so great that we decided to help other neighbourhoods. As a result, Regroupement Évangélique au Secours de l’Outaouais [The Evangelical Gathering to Help Outaouais] was formed to bring help to those in need.”

Leroux says it is not enough to pray; the Church needs to step out of its comfort zone to help hurting people. He says the relief efforts are the result of churches putting in action James 2:15-16: “Suppose a brother or a sister is without clothes and daily food. If one of you says to them, ‘Go in peace; keep warm and well fed,’ but does nothing about their physical needs, what good is it?”

But Leroux is encouraged to see Christians working together, motivated by the love of God, to bring hope in this crisis.

“We need to seize every opportunity to go from evangelizing to ‘evangelaction.’”