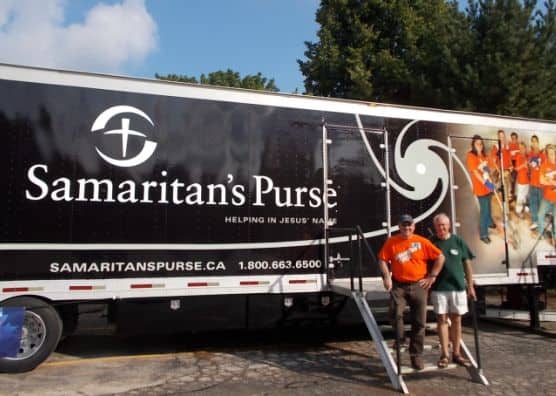 It was the Samaritan’s that called Burlington to tell them about the service they had-and would the city like some help.

In less than 24 hours the Samaritan’s Purse was set up at the Christian Reformed Church on New Street with a dedicated telephone line installed and the word out to the media-“we are here to help-this is what we do.”

And that they do. So far the Samaritans have cleaned up 30 homes and Steve Elliott, the man running the people in the field, said there are 30 more work orders waiting to be completed.

The work the Samaritan’s do does not cost the home owner a dime. “We get a call, we send someone out to do the assessment; if we can help we arrange for a crew to be on site as quickly as possible.” said Elliott.

There are about 80 volunteers-some are “die-hards” and there every day-others come when they can. “We had a group of women here for four hours; they all came from the same company and helped carry out bags of garbage and did what they could in the time they had available.”

The home the Samaritan’s were working on when we interviewed Elliott had mould that was getting into the ceiling. They had to do a lot of spraying to get that cleaned up.

The work crews assemble at the Christian Reformed Church, where they gather what they need in the way of equipment and are told where they will be working that day. The Chaplin holds a small prayer service and the teams are off to their assigned locations.

Elliott roams between locations checking on the progress and doing assessments at other homes. He keeps in touch with the Red Cross, who are doing the city wide work to determine where the problems are.

Elliott, a man in his early 50’s perhaps, calls Peterborough home. He was an emergency planner for the province before he retired.
When the work at a house is done, the crew meets with the family to say goodbye and presents them with a Bible that has been signed by every member of the work team. There are going to be more than 100 families in Burlington, who will have an understanding of the story of the Good Samaritan they didn’t have before.