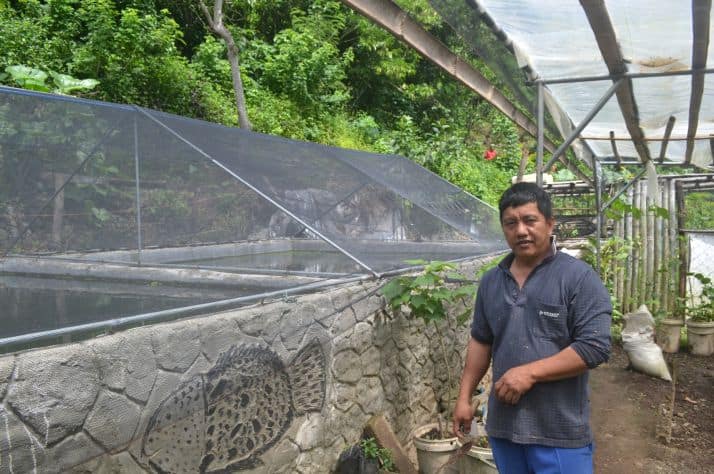 Feeding the body and the soul.

Nector used to be one of his community’s heaviest drinkers, often in conflict with his neighbors, and with no interest in God. Now he’s both a church and community leader, committed to helping his neighbors come to Christ, and to ensuring they avoid the malnutrition that often plagued their village.

What sparked the change in Nector and many others in his community near the northern Philippine city of Baguio? The transformation came through an agricultural project, supported by Samaritan’s Purse Canada donors, that is intent on feeding not only people’s bodies but their souls.

The garden is teaching low-cost, environmentally friendly organic farming to local residents. They are learning to grow for themselves and for re-sale a variety of crops including lettuce, green beans, carrots, zucchini, tomatoes, cauliflower, and highly nutritious specialties such as chaya, amaranth, and moringa.

The poultry, pig, and fish farms are teaching residents—many of them out-of-work miners after a local gold mine closed—to raise livestock that will provide their families and customers with valuable protein.

The pig farm is especially popular because it is teaching the locals to produce odorless pigs. The swine don’t smell because they eat only grass and vegetables mixed with molasses, salt, and some locally available micro-organisms.

When the first “demonstration” pigs arrived, the fact they did not smell—and they were distinctively black in color—created a lot of curiosity among the locals, including Nector Copero.

Although Nector was known for regularly getting drunk and fighting with his neighbors, he began changing while learning to care for the strange black odor-free pigs.

In the midst of the livestock training, we shared with Nector and the other trainees who Jesus Christ is, and how He died for the world’s sins. To many people’s surprise, Nector was among the first to welcome this Savior into his life. His wife Medina and children soon followed his lead.

They pledged their lives to Christ although doing so meant they have been treated as outcasts by Medina’s father—a local pagan priest—and other members of her family. Thankfully, some of those family members are starting to show an interest in Christianity.

Meanwhile, Nector is helping to lead his local church—serving as one of its pastors and helping it to continue growing. Now 47 years old, he is also helping to lead efforts to market local farmers’ produce more effectively throughout the region.

Hector has been invited by local government officials to join them in formulating policies procedures to help small farmers form a new cooperative marketing organization. He has also been appointed as one of the local officials who assesses whether farms are truly organic in their production processes.

In describing how the Samaritan’s Purse-funded agriculture project has helped him and his community, Nector says: “Not only can I provide food for my family, I can also share the Gospel through farming, and I have gained many friends from my community. We can serve God and serve people at the same time. I was so glad to have such an opportunity. It even gave me the confidence to pastor my people.”