Our disaster assistance response team is bringing critically needed supplies to hurting people in the Bahamas in Jesus’ Name.

The most terrifying moment for Rosie Meadows during Hurricane Dorian’s relentless thrashing wasn’t when glass exploded from the windows or when the sea churned to such heights that she thought a funnel cloud of ocean water was headed straight for her door.

For Rosie, fear overwhelmed her when she heard the children crying and screaming. She and her husband Gerald had welcomed friends and neighbors to ride out the storm with them, and when the children cried out—asking if they were going to die—Rosie knew she had to hide her terror and be brave for them. 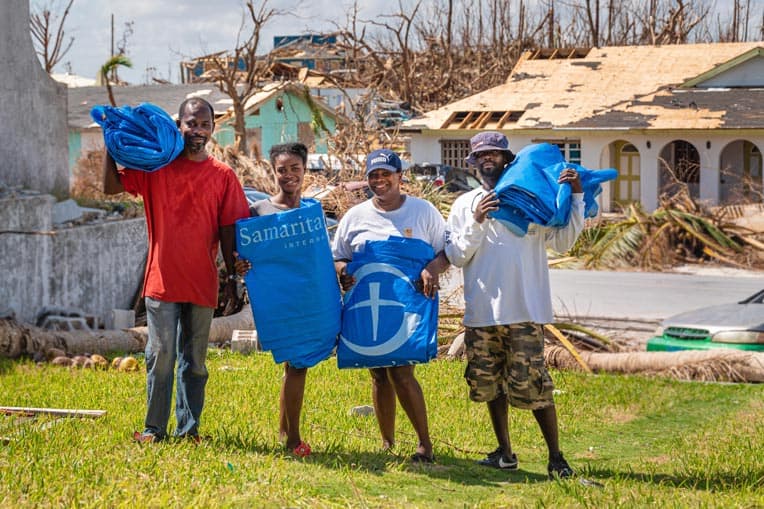 Gerald (far left) and Rosie (second from right) stand with their neighbors after receiving shelter plastic from Samaritan’s Purse.

Rosie has lived on Abaco Island in the Marsh Harbour community for 12 years. Most of the families on her street stayed during the storm, and as soon as it finally passed, they started checking on one another and seeing how they could help.

“We are pulling together to survive,” Rosie said. “We have our lives.”

Rosie and Gerald received heavy-duty shelter plastic from Samaritan’s Purse that will help protect their home from further damage. Most of their possessions are ruined from the flood that threatened to engulf their house when the water eventually rose high enough to float the furniture.

In addition to the shelter material, our teams are also distributing generators, solar lights, and hygiene kits to numerous remote communities such as Man-O-War Cay, Treasure Cay, and Moore’s Island.

Grateful to Be Alive

Joseph and Louise Wright also received tarp from Samaritan’s Purse. They say the heavy-duty plastic has already kept their roof from leaking during rainstorms that came in the days after the hurricane. The couple has been married for 60 years, and they’ve lived in the same home the entire time, where they raised 10 children and created precious memories.

But they feared their beloved family home wouldn’t be safe during the hurricane so they went a few minutes down the street and stayed with their son, whose home is on higher ground. 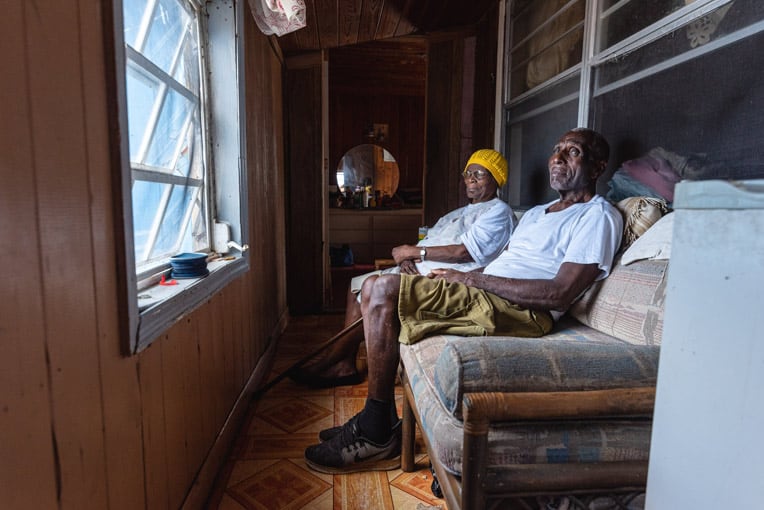 Joseph and Louise Wright are still in their home and thankful for the tarp they received for their roof.

Floodwaters and debris prevented the Wrights from returning home for nearly three days. When Joseph saw their home, with its roof damage and busted out windows, he didn’t dismay. Instead, his first thought was gratitude.

“Thank you, God, for sparing my life,” Joseph said. “I had faith that the Lord was going to bring us through.”

Joseph is still praying for the safety of one of his daughters, who was living in Marsh Harbour during the storm and has not been heard from since.

Joseph asked people to pray for his community, but his prayer request wasn’t related to storm recovery. In the aftermath of the most destructive storm to hit the Bahamas, he is praying for one thing: “Help us to stay focused on the Lord.”

About an hour from Marsh Harbour is Coopers Town, where Louisa James and more than 100 others from lower-lying areas found shelter at the Faith Walk Church of God.

“We kept hearing the wind and the roof being torn off,” she said. “But we see God’s faithfulness—we are alive.” 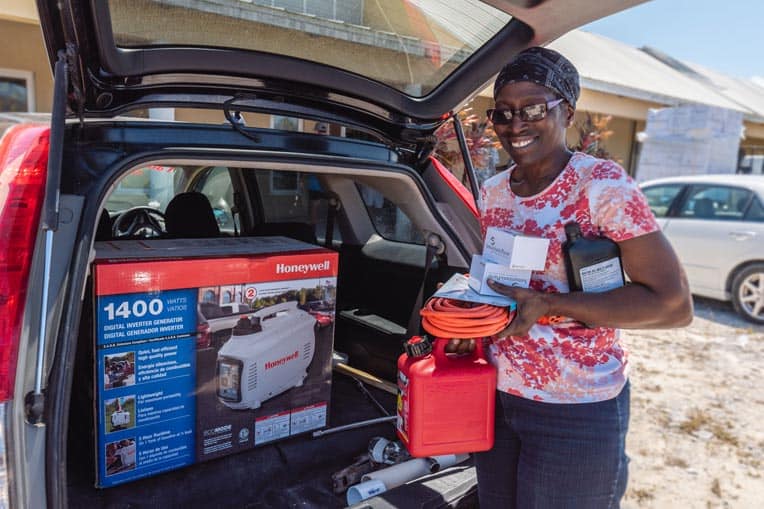 Louisa had to stay at the church for five days before floodwaters receded, roads were cleared, and it was safe to return home. But during that time, God’s people did not despair, and they filled their days with prayer and worship.

“Our trust was in Him,” Louisa said. “Sometimes, you look at the situation around you, and you think, ‘We’re going under.’ But you have to know what the Word of God says. The Lord is our refuge and He will protect us.”

Louisa received a generator during a Samaritan’s Purse distribution held at the church, as did Pastor Herbert Edgecombe, who has served at Faith Walk for seven years.

“It’s a blessing,” Pastor Herbert said of the help his community is receiving from Samaritan’s Purse. They are still without electricity, and without a time frame for when it will be restored, the generators are much needed and appreciated. 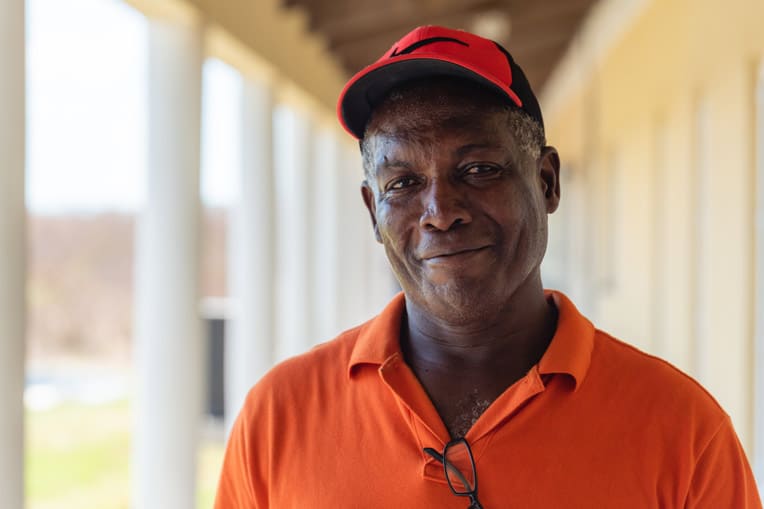 Pastor Herbert is praying for Bahamians to continue praising God despite the storm.

Pastor Herbert’s congregation still gathered for worship the Sunday after the storm. Despite losing homes and personal belongings, they refused to live in defeat.

“The congregation came with praise,” Pastor Herbert said. “Besides God, there is no other. He is the same God yesterday, today, and forever.”

Pastor Herbert prays that, in the days to come, Faith Walk Church will grow closer to God and their passion to tell others about Him will increase more and more. He prays that they will be a living testimony to the mercy of the God who spared their lives: “I knew God would take us through the storm.”

Please continue in prayer for the people of the Bahamas as they recover from Dorian. Pray also for our teams as they tirelessly serve those in need and have opportunities to share the Gospel. Samaritan’s Purse has more than 140 staff members serving in the Bahamas. 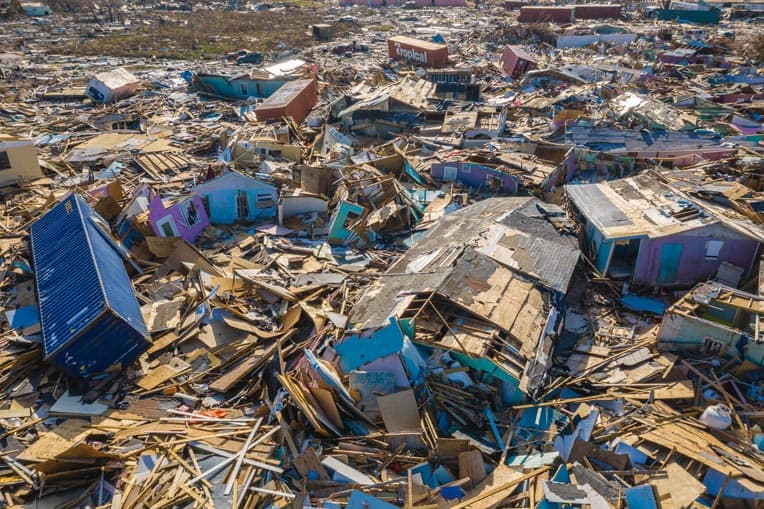 Marsh Harbour in the Abacos was devastated by Category 5 Hurricane Dorian. 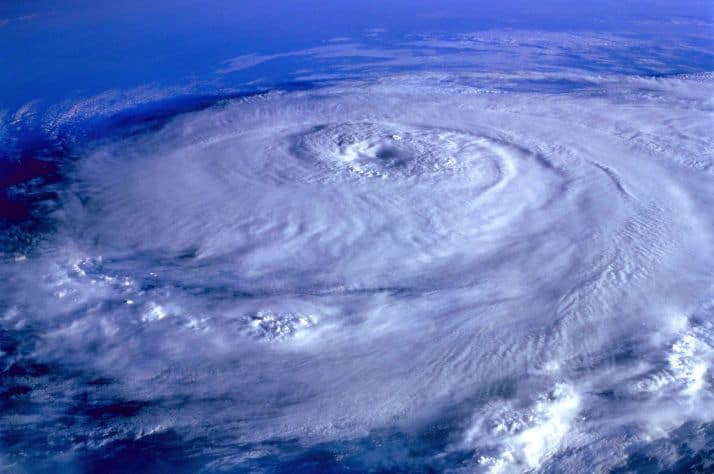 Hurricane Relief Samaritan's Purse responds to the urgent needs of families devastated by the wind, rain, and storm surge of catastrophic hurricanes. Whether internationally or here in Canada, we bring emergency relief and practical help in the Name of Jesus Christ to hurting people.
Hurricane Relief - 080486
$
Donate