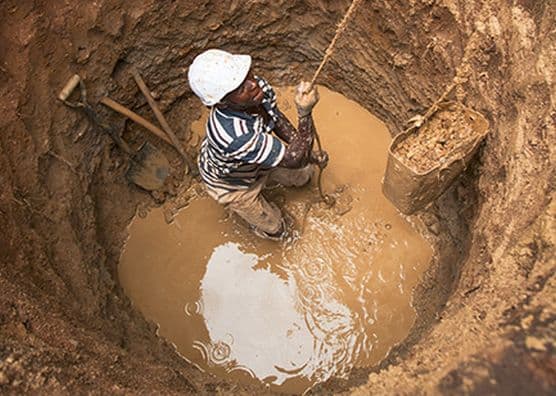 December, 2014—Western Uganda is lush, mountainous, and desperately in need of clean water. People are forced to use smelly, dirty water for drinking and cleaning.

It leads to diseases and death.

And it’s why Samaritan’s Purse is working in the area to give people access to fresh water.

Emmanuel Kamuhanda lives in a small community called Egali and has 11 children. He makes bricks for a living and has enough land that he can provide food for his family. But not having clean water makes life difficult.

“There are some problems I face that I can’t handle,” Emmanuel said. “When it comes to getting food for the family, at least we have what we can use.  When it comes to diseases, sometimes  I get complications.”

Emmanuel’s wife Priscilla said it’s difficult to take care of all their children and a lack of clean water makes it even harder. Others in the area shared the same sentiment.

Recently, Samaritan’s Purse brought hope to the community by building a shallow well.

Click here to help a village get clean water with a reservoir, well, or rainwater storage tank.

In rural Uganda, many people drink from water sources like this one. Small, muddy ponds shared by animals are breeding grounds for disease. With the installation of a new water source, the people in Egali will no longer have to drink from this source.

The old water source was a small, muddy pond that smelled bad and was a breeding ground for insects. The community members didn’t want to use it, but they had nowhere else to go.

In an adjoining parish, Elizabeth Nynjura, an elderly community member, explained that her water source was down a steep slope. Like the Kamuhanda’s water source, it was small and muddy. It was so difficult to get the water that she often had to send her children or grandchildren because it was too steep for her to climb.

“Before we came in, in two parishes, you’d find only two shallow wells put up by the district,” said Edison Kasereka, who works with the Samaritan’s Purse water, sanitation, and hygiene program in western Uganda. “This could not  provide enough water for  the 6,500 people in this area.”

For young children, the dirty water was a big problem. Because of drinking contaminated water, they often complained of stomachaches and being sick. Priscilla admitted that she has a hard time boiling water for all 13 members of her family, and sometimes she felt unmotivated because the insects stayed in the water even after boiling.

“It would be worse with the children,” Edison said. “At least the adults, after getting that water, they boil it and keep it somewhere. But for the children, whatever water (they find) is comfortable for them to drink. They would take the unboiled and the boiled. The young children bathe in the same ponds when there’s no water at home.”

Bathing in the drinking water contaminated it more, but children weren’t the only ones. Many people took their animals to the small pond to drink and bathe.

“We were competing with animals sometimes,” Emmanuel said. “We would be fetching water from the pond at the same time the neighbors would push their cows to drink from the same source.”

When the rains left, the small pond dried up, and the families had to walk even further to find water. The long trips would often take up much of the day, leaving little time for work.

“During the dry season, I would walk four kilometers away from here,” Emmanuel said. “There’s a stream where I would get the water, but still, it’s not the best water for me. It was hard for my family because I would have to go around five times a day.”

Last year, Edison met with district officials and found that only 25 percent of the parish had access to clean water. We began helping the community build new shallow wells, and water coverage is now at more than 50 percent. People who live close to the wells said that they would never get water from the ponds again.

The biggest change is the health of the children. They no longer complain of stomachaches, and parents have fewer medical bills.

“Nowadays, when I’m drinking the water, I drink with warm heart because I know the water is good,” Priscilla said.

Emmanuel and Priscilla live right by the new well, and the community chose to make Emmanuel the chairman of the water source. One day, Samaritan’s Purse will leave the community, but the shallow well will still exist. Emmanuel and others on the water committee will manage and maintain it.

Emmanuel said he has noticed that the health of the entire community is improving, and no one goes to the pond or has to travel long distances anymore for water. He is thankful to see how his community has benefited.

“Water is life,” Edison said. “If you have safe water, you have good life.”

Along with installing wells, Samaritan’s Purse also teaches communities about the importance of sanitation and hygiene. Ideas such as hand washing and using a latrine are often foreign to people in rural African communities. Samaritan’s Purse holds training sessions and teaches locals how to make latrines, hand-washing stations, dish-drying racks, and other important sanitation items.

“If the community is not well versed with personal hygiene at home, the water source can be contaminated easily,” Edison said. “That’s why, whenever we’re putting up a water source, the hygiene training has to go along with that.”

Through our water projects, we are often able to share the Gospel with people who don’t know Christ. Many people in the community said that they felt like God had provided for them and that He would continue to do great things for them.

“I have been praying so hard,” Elizabeth said. “I think God has answered my prayers with what I had never thought of in my lifetime.”