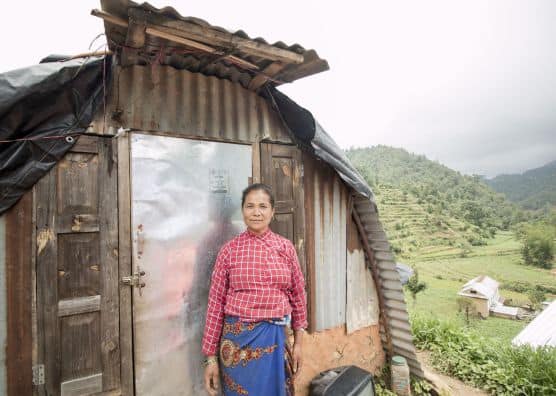 Samaritan's Purse is helping to rebuild houses and lives in Nepal after the earthquake.

Almost all of the destroyed homes were two storeys high and made from red bricks mortared layer upon layer. When the earthquake hit, the brick walls quickly buckled and fell. The same thing happened in dozens of other Nepalese communities—killing more than 8,850 people, injuring almost 22,000 and leaving 3.5 million temporarily homeless in the nation of 26 million.

Because Tamang is 84, you might assume she’s reluctant to embrace new construction methods, insisting instead on a replacement home that’s almost identical to her old one.

But Tamang, a widow, is one of a handful of people in her village excitedly preparing to move into new homes that are nothing like their old ones. Samaritan’s Purse, in partnership with a Christian organization in Nepal, is building five model homes made from stacked bags of earth, similar to military bunkers.

She pointed toward one of her village’s old-style houses and said “I’d rather have a new-style home. It seems safer. And I am thankful to the people who have donated for these earth-bag houses to be built.”

The construction process begins  by digging a trench and filling it with gravel to serve as a stable foundation. Then workers pour pail after pail of earth into the bags and begin laying them end-to-end to form the home’s walls—almost like a log house. The bags are tamped down for easy stacking. Strips of barbed wire are also laid on each layer of bags to stop them from shifting.

As the walls of Tamang’s home rise, workers install reinforcing steel bars at each corner to provide added strength and durability. Workers have also installed door and window frames—attaching them to the adjoining earth bags. When the walls reach their full height, trusses will be added, then a roof. The inside and outside walls will also be plastered. 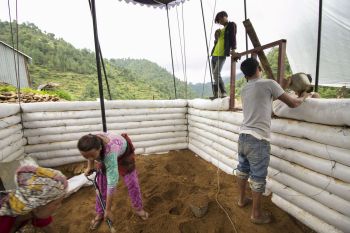 These earth-bag homes are similar to military bunkers and take about a month to build.

It takes about a month to build each earth-bag home. After the first five ‘model homes’ are occupied, and we begin building them in larger volumes, we’ll  use machines to fill and stack the dirt-bags.

“This is simple technology. All of it is available in the marketplace,” said Lakshmeshwar Mahato, manager of Samaritan’s Purse’s reconstruction program in Nepal. He notes that while we and our partner organization are employing professional engineers to oversee the construction sites, we’re also employing local laborers,  helping to  create economic benefits and teach village residents new skills.

There were already 56 of the experimental earth bag homes in Nepal before the earthquake. When none were damaged during the initial quake— or during dozens of lesser quakes since then— it became apparent that the technology could provide a long-term housing answer in earthquake-prone regions.

Samaritan’s Purse has approval from the Nepalese government to build 500 of the earth-bag homes in various communities, Lakshmeshwar says. “We’re going to build for especially vulnerable people.”

That includes widows, who often face persecution in Nepal because of long-held cultural beliefs that they bear some responsibility for their husbands’ deaths, and don’t deserve charitable treatment.

When the original 7.8-magnitude quake hit, the second storey of Tamang’s home quickly collapsed. She was inside at the time. One of her five children came running from his house and pulled her out. Moments later, the walls of the first storey fell.

Most of the time since then, Tamang has been living in a roughly four-meter-square quonset hut. So has her neighbor, Bhin Maya Torang, a 50-year-old widow. She and  her elderly mother-in-law are also waiting to move into an earth-bag home. “We prefer this new house,” Torang says. “It seems safer. I’m thankful.”

We welcome your prayers to help us, serve as the hands and feet of Jesus, building many more of these specialized homes in Nepal as part of our continuing response to the 2015 earthquakes.