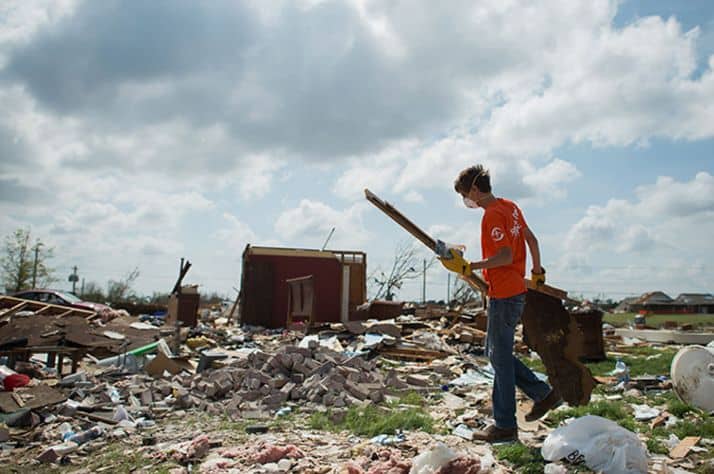 2011: Samaritan's Purse responds with help and hope in Jesus' Name to a devastating EF-5 tornado in Joplin, Missouri, and many other deadly twisters that took lives and wrecked communities.

The EF-4 tornado that hit Tuscaloosa, Alabama, on April 27, 2011, killed 64 people and left an indelible mark on hard-hit communities. 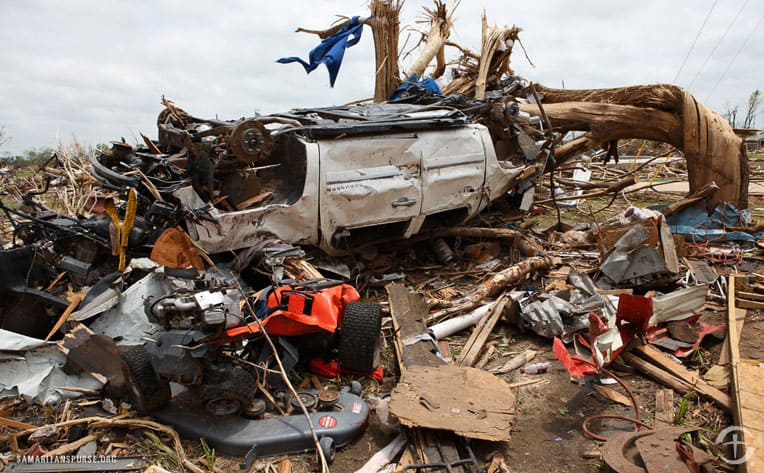 The devastation of tornadoes can be sudden and widespread.

Samaritan’s Purse immediately deployed and clean up work began just a few days after the storm. Our teams didn’t depart the Tuscaloosa area for two more years, at the conclusion of a rebuild project in the community. With the help of more than 1,100 volunteers and the support of First Baptist Church of Tuscaloosa, we rebuilt 18 homes and provided significant repairs to 13 homes to make them livable again.

Only a few weeks into our response in Alabama, tragedy struck once again.

On the evening of May 22, 2011, a tornado touched down at the Kansas/Missouri border, tracking east and intensifying as it ripped through Joplin, Missouri, on a 22-mile path of devastation. This initial weaker twister joined with other destructive vortices surrounding it, eventually combining into a mile-wide EF-5 that was then the deadliest tornado on record. In just 38 minutes it killed 142 people as it leveled homes and many buildings near the town’s center. 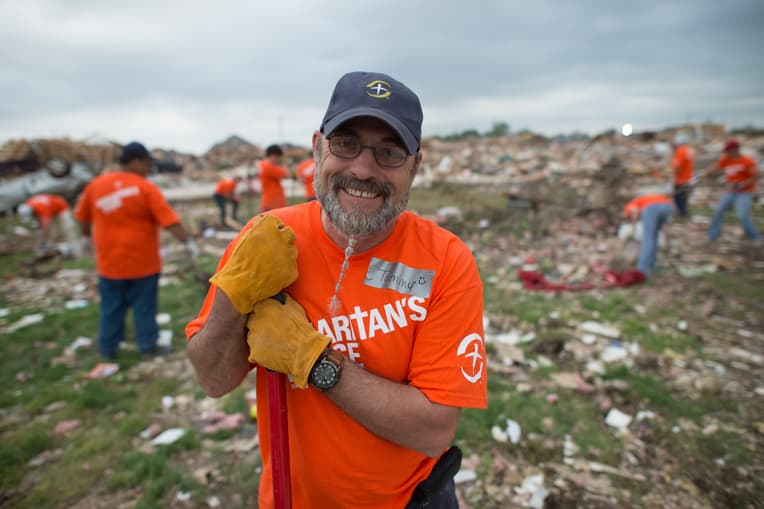 Tommy was impacted by the Joplin, Missouri, tornado, but experienced hope as Samaritan’s Purse helped him clean up and rebuild his home. He volunteered for the Moore, Oklahoma, tornado two years later.

Over the course of six weeks Samaritan’s Purse deployed about 6,500 volunteers to assist more than 750 families with tree and debris removal, recovery of belongings, patching damaged roofs, and sharing the hope of Jesus Christ with so many hurting people.

“I remember wondering, ‘How can they still have hope after this?’” said Danielle Crisco, whose first time volunteering with us was in Joplin.

But as Danielle and countless other volunteers have experienced over the years of serving after deadly tornadoes and other natural disasters, opportunities to share the eternal hope of the Lord Jesus Christ is why Samaritan’s Purse continues to respond.

In the case of Joplin, the work didn’t end when the initial disaster recovery phase was completed. We stayed to rebuild and repair homes for at least 20 families. Tommy Harper was one homeowner we helped from recovery to rebuild, and then he became a volunteer.

“You never wake up in the morning thinking, ‘Today is the day my life is going to be turned upside down. Today is the day I am going to lose everything I’ve worked for my entire life,’” Tommy said.

Yet, it was through tragic circumstances followed by God’s work through Samaritan’s Purse volunteers that Tommy recommitted his life to God and began serving others. Two years later, almost to the day that a tornado churned through his town, another EF-5 hit several hundred miles away near Moore, Oklahoma.

More than a mile wide, the massive twister ripped across the area for 17 miles. In just 37 minutes it had claimed 24 lives, including seven children. 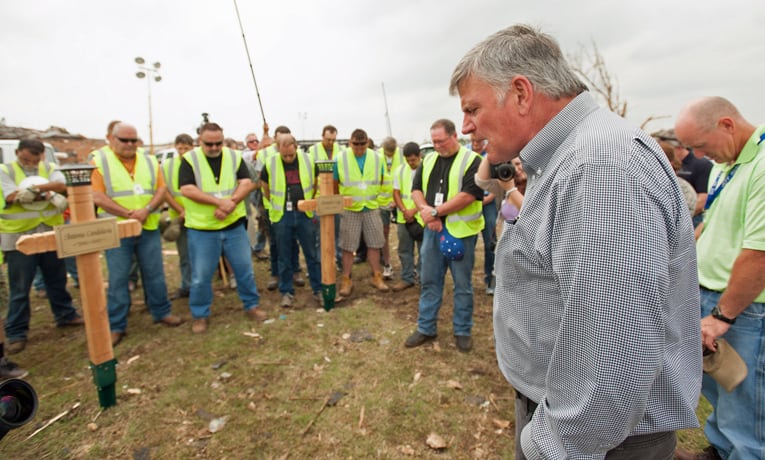 Franklin Graham prays with workers in Moore, Oklahoma, who had erected crosses in memory of seven children killed in the storm.

“I was there on day three after the tornado in 2013 to help clean up,” Tommy said, who also returned 13 months later to help rebuild homes in the area. “Through the experience, I got to meet some wonderful people. I got to hear their stories and cry with them. I understand what they felt as a victim of a storm, as someone who felt helpless in an instant.”

Tommy was among 4,000 volunteers who showed up to help more than 615 families clean up their homes and properties in Moore. More than 160 volunteers from 24 states came to rebuild homes in the devastated area. Each fully-rebuilt home was constructed with a steel-and-concrete reinforced safe room in the center of the structure. We also installed in-ground storm shelters on more than four dozen other properties to give homeowners a secure place to retreat in the event of a tornado.

In early March 2020, a series of tornadoes spun from a powerful thunderstorm that barreled through the Midwest and southern states, resulting in middle Tennessee being hit hard. 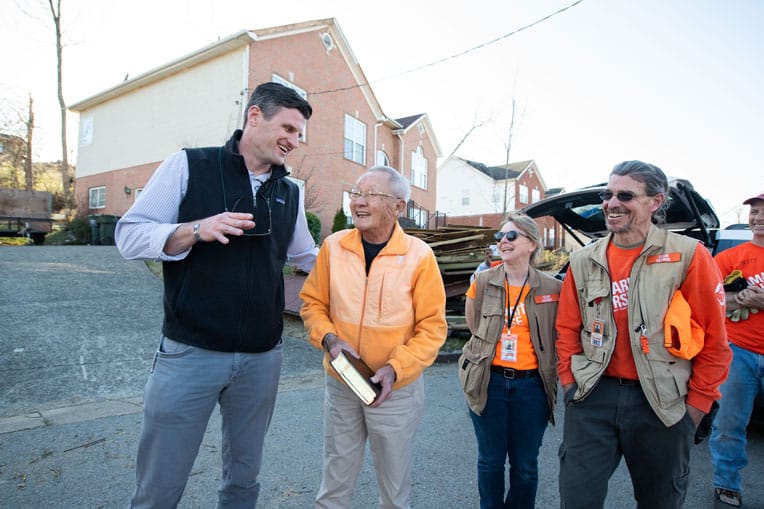 Edward Graham met with homeowners and volunteers after tornadoes swept through middle Tennessee in early 2020.

Twisters tore through the Volunteer State along a destructive path of about 130-145 miles eastward from downtown Nashville, causing severe damage across at least three counties and killing 24 people. During this response, more than 6,000 Samaritan’s Purse volunteers completed 475 work orders for homeowners.

Just weeks later, Tennessee, along with three other states, suffered another deadly blow. A severe storm system over Easter weekend spawned more than 100 tornadoes that resulted in more than 30 deaths and about 770 miles of destruction across 10 states. Samaritan’s Purse quickly deployed disaster relief teams to the four hardest-hit states: Tennessee, Louisiana, Mississippi, and South Carolina.

We praise God that across these four locations, more than 1,300 volunteers joined our relief efforts. We assisted with clean-up of hundreds of homes and saw dozens of individuals come to faith in Jesus Christ. In Chattanooga and in Nashville, Samaritan’s Purse volunteers are still working. We are repairing and rebuilding homes impacted by those Spring 2020 storms.

“God’s entrusted us and equipped us with materials and people to allow us to respond quickly when there are storms,” said Edward Graham. “As we’re serving we have the opportunity to put our arm around them and to share the hope that we have in Jesus. That’s why we’re here.”